Very few Domaines need as little introduction as Domaine de Vogüé. Dating back to the 15th century it has been under the same ownership for 20 generations. The general manager, Jean-Luc Pepin, was in attendance to host the evening with Jordi (to whom so many thanks as ever) in a unique retrospective of the Domaine's Bonnes Mares. Even Jean-Luc has never done so extensive a tasting of Bonnes Mares as this. I must declare my bias here as I work for the UK agent of this great Domaine. The bottles for this tasting were all bought by Jordi over the course of 6 or 7 years with as little research as is possible.

By way of a little background I found this: de Vogue Bonnes Mares - Terroir insight by Wine Hog which I think is a good overview and includes a good map (love a map me!). The one analogy Adam used that Jean-Luc liked and re-uses is that you "would want Bonnes Mares on your side in a fight"...

To kick off as people gathered we had Philipponnat Clos de Goisses 2004 en magnum - A shade reduced, a little cocoa bean and reduction on the nose like a late release Champagne. A food Champagne was how I view this, vinous and rich with good texture and enough life.

The team at the square did a good job with the food, all of which was a high standard but importantly played a good second fiddle to the wine. Nothing over powering and the service worked well as there was no over emphasis on trying to match things. A flight of wines was poured, into not overly big glasses (a good thing), then the food followed. The menu is below:

Cheese
So now it was time to get going:
Modern vintages: These tastings always focus on vintages that are mature or at the very least maturing. Whilst this started with the 1999 I have heard good things about the 2000 and had the 2001 recently at a cracking dinner in St.Emilion and it's delicious...this was a stunning flight.

1999 - Pure colour, actually the colours in the first two flights were very consistent, with a tiny bit of development. Lovely fresh mulled red fruits on the nose. This is the only wine on the evening that was most certainly primary. Really good balance and density, a shade reduced and a little hint of cheesecloth, sweet berry fruit on finish. Very promising.

1996 - Good colour and clarity. A little pine-like spice, richness on the nose, palate good but a shade drier, quite taut and serious. Some sweetness. There is a very "1996 like" sternness. I like this and would like to drink a bottle, it isn't showey enough to standout in a tasting like this but is good.

1993 - A slightly deeper colour, deliciously sweet and succulent, not just red fruit on the palate, good depth, a shade of clementine and tangerine. This is a little bigger than some of the 1993's I've had. Delicious and certainly still loosening up and improving! Very fine.

1989 - A shade lighter in colour but so bright and so clean. A shade of animal character just showing a little more a maturity. Pure and lovely sweet fruit, really delicious, this is a feminine and sweet, poised wine. A little herbaceousness certainly, this is, on this showing, a classier and more refined wine than the good, but more brutish 1990. Special. 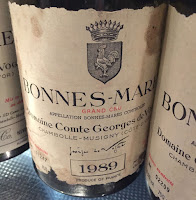 1988 - A shade more evolved, a dash more texture, almost a slightly chalky, powdered feel. At the same time it is very moreish and a little saline, the note doesn't seem "glowing" but this is good and a little like the 1996 in being very typical of the vintage.
Classic vintages: A dangerous title given that it raises expectation.

1985 - Paler and lighter in colour but so clear and clean. A little development but such profound sweetness, a lovely greenness that gives energy. This is a really super wine, focus but generous, rich but not remotely weighty. Special, graceful, perfect now. 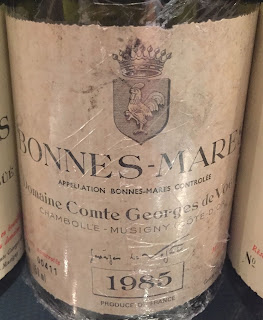 1979 - Bright, clean and lean. This is in a similar style to the 1985, it remained remarkably consistent in the glass, not budging an inch. Great persistence and poise. Lovely.

1978 - Slightly less clear as a colour. More texture, a little more degraded but at the same time saline, this is bigger and bolder than anything else going back to the 1990. Opulent and generous. Nicely a little vulgar.

1976 - More red to the colour here. This is very deep and quite resinous. Serious and with really decadent richness and opulence. There is a sense of the hot and dry season but not of burnt fruit. The image is one of small intense berries. Very good indeed.

1970 - A shade orange in colour, clear madeirisation, the palate initially had a dash of sweetness but ultimately this is not right.

1967 - This has a little madeirsation but whilst the 1970 does not appear to be representative I think this probably is as 1967 is just very tricky.
Illustrious vintages of the George de Vogüé era:

1966 - Sensational wine this. Good colour, lovely saline, some smoke and generosity but also focus. Rose petals and delicate aromas, a little like the 1985 in character but with even more to give. Staggeringly good.

1964 - Slightly frazzled, degraded even, then a little fruit and some sweetness but ultimately this is not in perfect condition.

1962 - Delicious, seriously giving the 1966 a run for its money. Herbs, cocoa bean and then some spices before a little coffee but all with good intensity. There is an element of the 1976 character here. Special.

1953 - Sweet decay, a slightly milky texture, this actually got a little better with air which was unexpected.

1949 - Smells a little herbal, almost minty with some saline too, a shade powdery in texture. This is interesting and not dead if a shadow of what it probably once was.
Musigny Blanc mystery vintage - So this had to be 1994 or older as the white has been named Bourgogne Blanc since, knowing Jordi it could well have been much older. There was a grapefruit character and some citrus. To me there was an almost Chablis like quality. Clearly very little new oak. It was impressive and enjoyably pure too but I really needed to know what it was. One of our number got it bang on saying it reminded him of another white of the same vintage - Corton-Charlemagne from Bonneau du Martray - it was the 1987 vintage.

Fonseca 1963 followed on and was lovely, a little volatile, slightly raisin like. The marzipan character was there but in perfect balance with the succulent dried fruits. Another reminder, as in the last post, that we really should drink more good port.

Jordi, in a fit of generosity, then opened two more bottles both of vintages we had had earlier - 1976 and 1953. The 1976 was a fresher bottle, insanely so. The previous bottle was superb and what you would hope it would be in terms of maturity. This bottle tasted more like the 1993 than any other wine of the night, amazing really. The 1953 was a more lively bottle, showing more fruit and a little more balance...

All in all a stunning evening, a really good group, everyone's expectations were surpassed. What we learnt I think is that Bonnes Mares from de Vogue is more that capable of Red Burgundy of the highest order and is not to be underestimated. Also that whilst the de Vogue style is one that repays cellaring this has been exaggerated...I look forward to many more vintages in the future.

Thank you Jordi and thank you Jean-Luc for your insights!