Each March Guillaume d’Angerville comes to London to do a press tasting of the recently release vintage, in this case 2013. Volnay as a village has had a rough time of it with minute yields in 2012, 2013 and also in the yet to be release 2014. When you combine this with the fact that 2010 and 2011 were not large it is not a happy story. What is good news though is that the wines produced in all those vintages, against the odds, show that this Domaine is as good, and very possibly better, than ever. Guillaume is very deferential to previous generations, of which he is the 6th, but I think it is fair to say the conversion to Bio-dynamics that started in 2006 and was fully up and running in 2009 has had a great effect. This tasting and the lunch that followed were both held at Quo Vadis yesterday

The wines were tasted, as is usually the way in Burgundy, with the white last. None of the wines are bottled as yet. Up to the Taillepieds are in tank awaiting bottling soon, Champans, Clos des Ducs and Meursault are all still in barrel.

Volnay 2013
Quite dark fruit, leaning to black over red but with real precision and focus. A little dash of mellow white pepper. Lovely focused and red fruited palate, nice bit of grip but there is sweetness to balance.

Volnay 1er Cru 2013
Lovely nose of red fruit with a little black, a little more full than I expected even a little more brooding. The spice is less present but only because of the richness of fruit. Lovely, more dense. 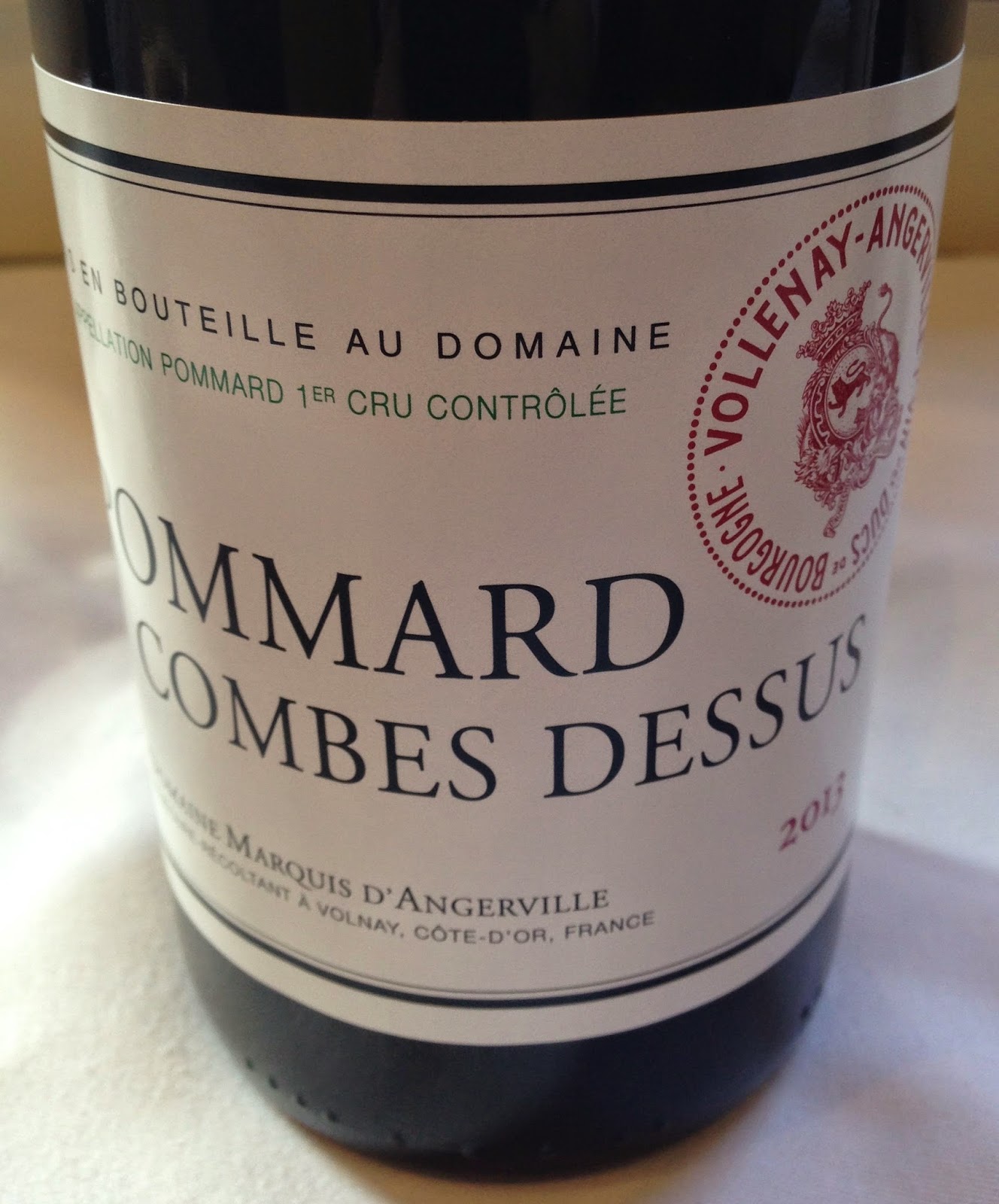 Wonderfully different, airy but intense, more sweetness on the nose, almost a herbal citrus note then there is a darker fruit on the palate but again a sweetness. Not without some grip and minerality. There is though a persistent citrus freshness on the finish, not like any Pommard I have had. Very interesting to note that Guillaume commented that Bio-dynamics have really made a significant difference here, more energy and focus coming to the wine.

Volnay 1er Cru Fremiet 2013
More concentrated and bolder than the Angles, denser and somehow a little more shy, the palate too is a little drier and bigger and may be a shade less overt. Bolder, bigger, drier. This could be a sleeper.

Volnay 1er Cru Caillerets 2013
A little more leafy, more sinewy but good for it, redder fruit. More and more comes out in glass, the fruit is oranges as well as red currant, there is grip but elegance also.

Volnay 1er Cru Taillepieds 2013
Really balanced and harder to describe as a result, good grip once on the palate but great acidity and energy, even nervousness which translates as drive, red berries but with a dash of spice. Very d’Angerville.

Volnay 1er Cru Champans 2013
I am biased here as I have a real soft spot for Champans, there is a roundness and completeness to this wine on the nose (as there was with the 2009 over lunch), on the palate it is more brooding and a little drier, the empty glass smells delicious which I always rate as a good sign.

Volnay 1er Cru Clos des Ducs 2013
Densely mineral with darker fruits, black even, very very intense, this is weightier but the palate tells a great tale, this is so Clos des Ducs, there is a dramatically long length, stunning texture.

Meursault 1er Cu Santenots 2013
The nose reminds me of grand cru Chablis and citrus but with a little generosity of Meursault in texture on the palate, it is this lovely texture combined with the right amount of mineral energy that drives this wine. I asked Guillaume about the refined nature of this wine and he commented that it only sees 25% new oak here and that the new oak barrels Guillaume now buys are bigger than standard 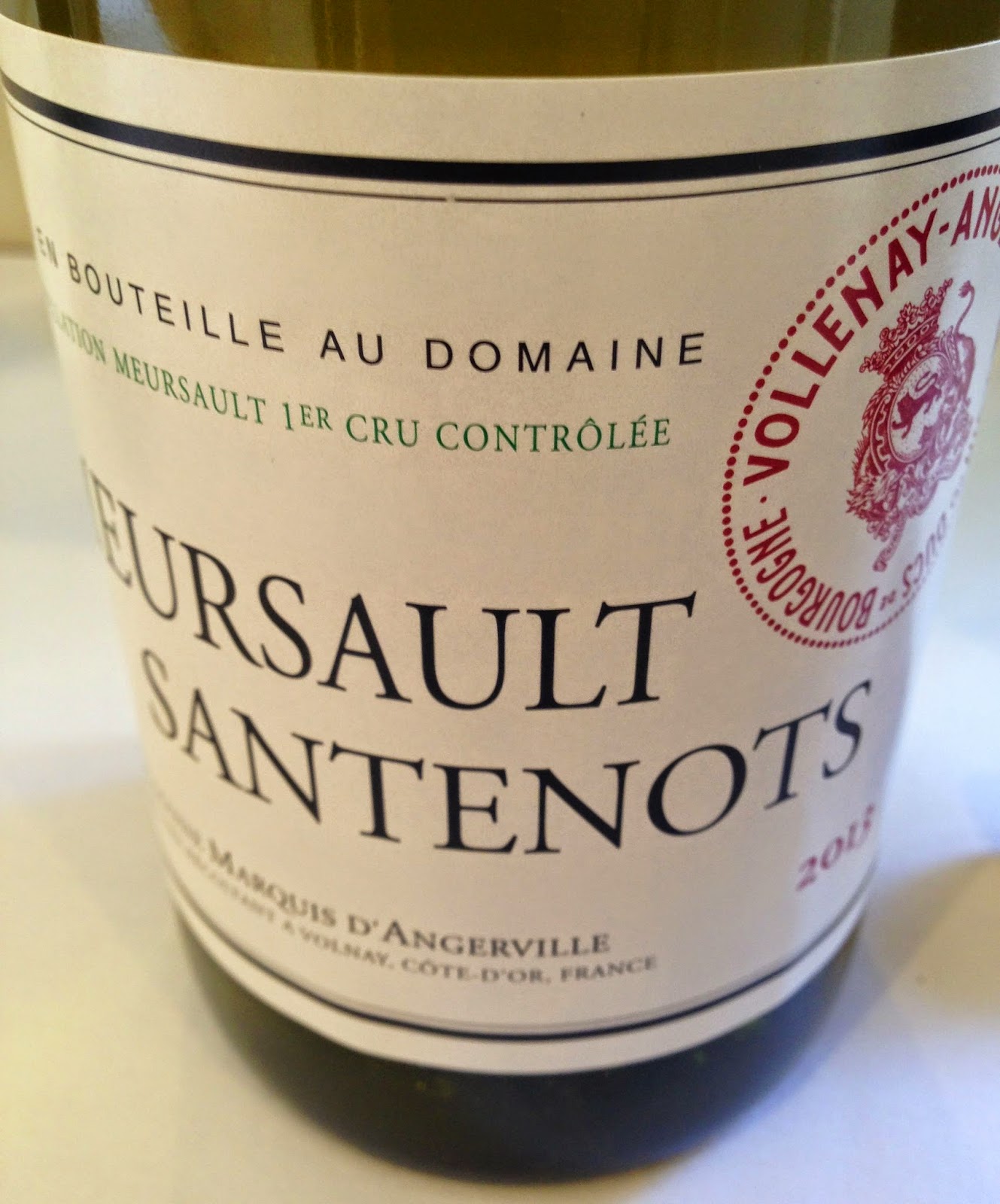 After the tasting we moved to the dining room for Lunch and a selection of different wines and vintages – it is a format that really works because however fascinating a tasting, it is always best when set in the context of doing what these wines are made for – drinking them!

Meursault 1er Cu Santenots 2011
Very pale colour, a little reduced, which I really like, some smokiness, then white fruits, not citrus, this will become more nutty and complex, I really liked this right now though.

As we moved onto the 2009’s Guillaume made a very interesting comment about elevage, saying how crucial it is and in contrasting ways in different vintages, the 2008’s put on “weight”  whilst the 2009’s became more refined.

Volnay 1er Cru Champans 2009
Pure but seductively extrovert, the fruit is red and open. There is lovely balance and just a shade of cool stoney minerality that comes through. Just so drinkably delicious…if I had this at home it wouldn’t last “5 minutes”.
Volnay 1er Cru Caillerets 2009
Markedly darker colour, sweetness and richness are the watchwords here. I can see this ageing brilliantly as there is a sweet savouriness under the covers. Clearly a site to watch closely as the vast majority of this site was replanted in 1999-2000 so we are talking about young vines. Interestingly Guillaume has bought an parcel of older vines recently. 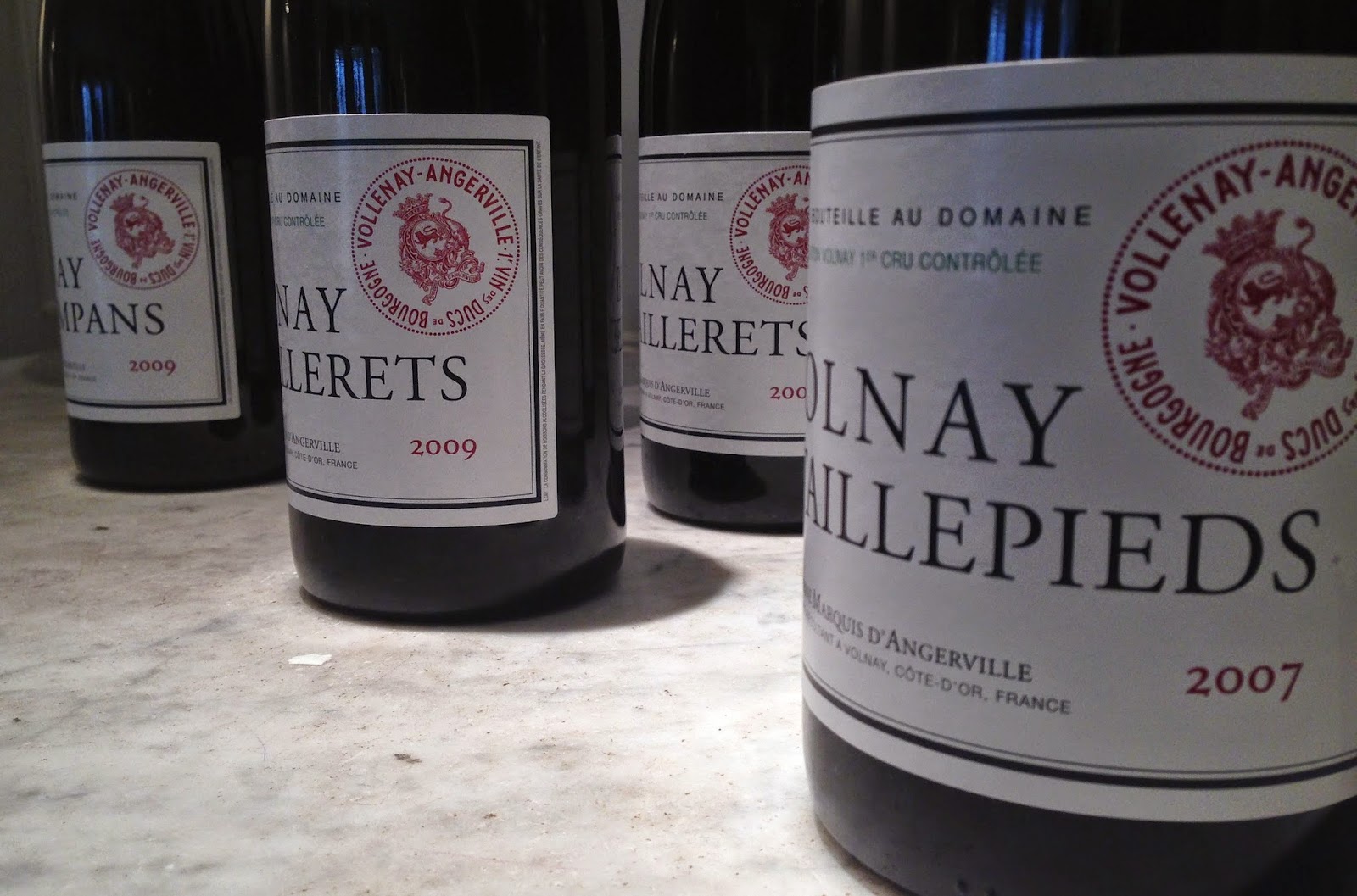 Volnay 1er Cru Taillepieds 2007
2007 was the third most precocious vintage the Domaine has ever know with picking on the 3rd September. There is a focus to this wine and also a complexity – I loved Guillaume’s summary that “it is not an arrogant wine…it is what it is”…it is ready now but there is no rush.

Volnay 1er Cru Clos des Ducs 2008
A tricky vintage that was not picked until over three weeks later than 2007. This was initially taut and tight in the glass but where the 2007 let you have it from the start this toys with you and opened out in the glass, there is significant classicism here, an academic wine that will age well, I feel. 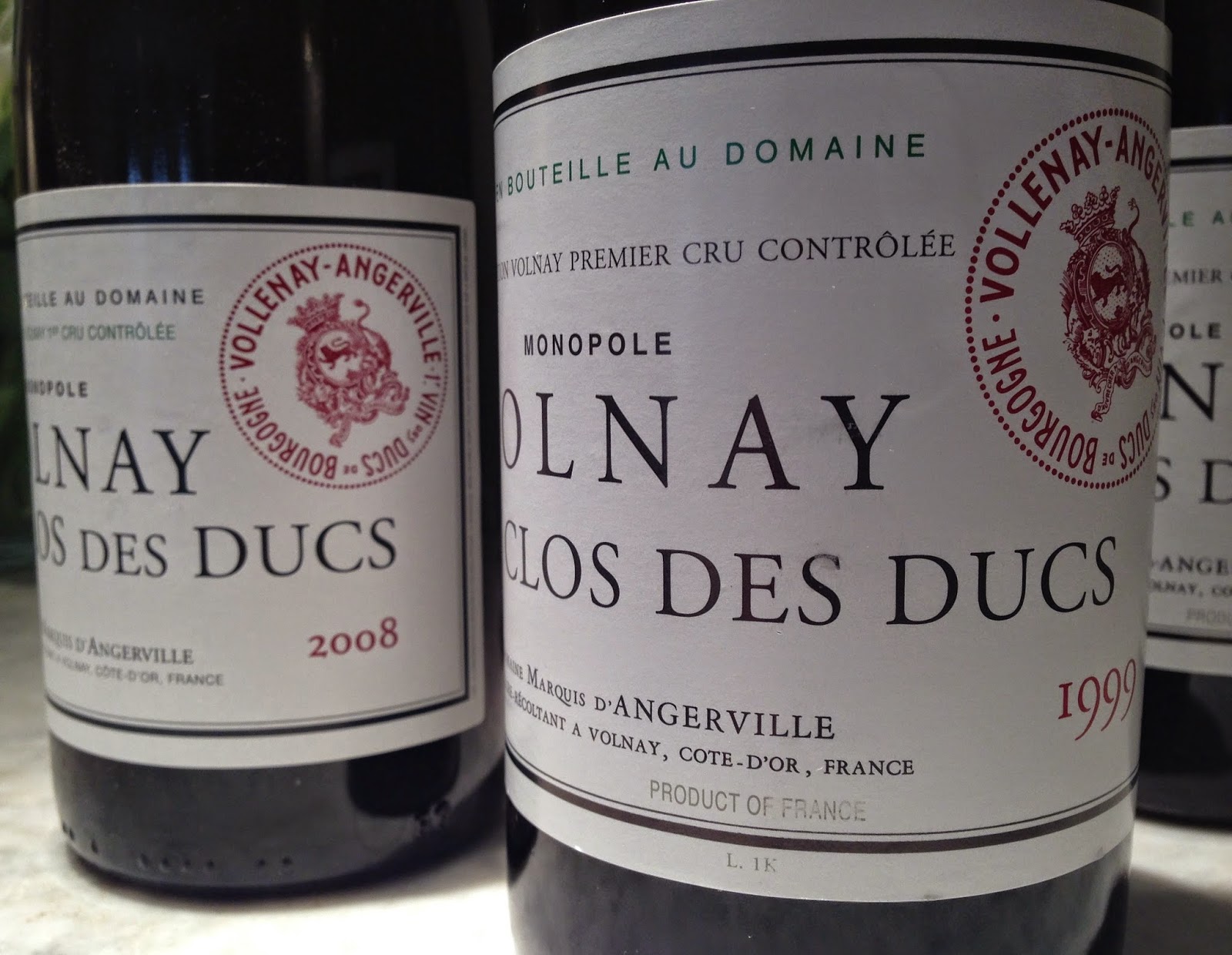 Volnay 1er Cru Clos des Ducs 1999
Guillaume commented that he could relax with the 1999 as it was not “his”, referring to the fact Guillaume whilst involved was not solely responsible until the 2003 vintage. The 1999 is a wine I have had recently (Clos des Ducs 1920-2002) and it is just starting to hit its stride, still a little muted there is a very great wine here. Very vinous, complex, a salinity as well as a lovely herbal edge…if you own this continue to be patient – you won’t regret it…

I am already looking forward to next year…and whilst the 2014 is small again (though not on the scale of 2012 or 2013) I a praying that 2015 will bring a large and wonderful crop because this Domaine is coiled ready to pounce on just such an opportunity…
Posted by Will Hargrove at 14:58 No comments:

This was the first dinner/tasting I experienced with a group known as the "Rabelaisians" run by Rob and Sara. The idea is a simple split the bill scenario with a theme - horizontal or vertical - for each dinner.

As the title gives away this was vertical of the "Pora" Cru from Produttori del Barbaresco. A little bit of background that is shamelessly botched together from the "net" follows.

The arrival of Cavazza in 1881 in Barbaresco put the spotlight onto the region and in 1894 he founded the Cantina Sociale di Barbaresco with a group of nine growers. Though the quality of the nebbiolo grown in the region had long been recognized, the newly founded Cantina is generally recognized as the birthyear of ‘Barbaresco’. Two World Wars and the subsequent poverty in Italy had a profound effect on the region and revival only started in the 1960s and 1970s thanks to a generation of young growers such as Angelo Gaja, Bruno Giacosa and the cooperative cellar of Produttori del Barbaresco, the successor of the original Cantina Sociale di Barbaresco. Barbaresco became a DOC in 1966 and a DOCG in 1980.

Pora is widely considered as the flagship wine of Produttori. It was at one time owned by Domizio Cavazza and among the first single vineyard wines to be released by the cooperative. It is south-southwest facing, bordering Asili on Calcareous blue marl. The single vineyard’Pora’ bottling is always a Riserva and today aged for three years in botti.

The venue will surprise nobody - Zucca, the menu is below:

Chocolate and salted caramel tart, hazelnut ice cream
The wines were served in three flights of four wines each.

2004 - Ever so slightly closed, slightly airy which is just an expression of it seriousness I guess. There is an intensity about it's texture. It seems an odd comment but this is very clean and precise, long also, I am guessing this will be quite something. 18+

2001 - Slightly disappointing...saline and leather, very masculine, tasting 5-10 years older than it should be. A little too degraded. I have a feeling the bottle was not perfect, it just seemed a little heavy. No score.

2000 - You can tell this was a warm vintage, it has that slightly bruised fruit and a slight lack of precision. A tiny bit dry at the end and without much upside in terms of cellaring, you could keep it but why. All that sounds negative but actually as a wine to drink now it's a good glass. It's just a bit more Monday/Tuesday night Spag Bol than Thursday night truffle pasta if that makes sense. 15.5

Verdict - overall I think people liked 2004 then 2005 with the other two a little behind and general agreement that 2001 wasn't "spot on".

Flight 2
1999 - Some maturity coming, clean, intense, tightly wound, a slight bricky red fruit, Iron and lifted herbs. Really pure and for the purist also. Excitingly correct and proper, just what it should be! 18.5

1997 - Almost a slight greek yoghurt nose, deep and sweet, a slight aniseed edge, degraded but with some strawberry fruit, of the same style as the 2000 but with more to offer. 16.5-17
1996 - A little bit of "swimming pool" (not a bad note oddly) then some pine and resin, soy and a little spice but essentially very lean and a little angular, a slight wet-hay greenness. There were a few who thought this corked, I didn't. It was just mean to me, very 1996 in a way. 16

1995 - Initial nose reminds me of caramel, good acidity and nicely complete wine, there is richness and a little salinity (never quite managed to be salted caramel). There is not masses of fruit here but this is good. 17.5

Verdict - No real consensus, many preferred the 1997 but it was third in my book, interesting differences, a flight that slightly lacked fruit given it is not old yet. I'd have that 1999 in my cellar any day (wouldn't last long mind you)

Flight 3
1985 - Beautiful, persistent, elegant, saline, red fruit, simple stoney minerality, the only other vintage it could have been was 1982, absolutely lovely. 18

1978 - Some stink (sewage even) that passed very quickly then some degraded fruit, good acidity is coming through, sweetness is there and then some soy, this is at a lovely stage and is really quite decadent. 18

1971 - "Swimming pool" initially this passes and leaves trademark salinity thereafter you have archetypal aged nebbiolo, fruit of which some is red, then you have a savoury edge, bovril and soy...really delicious. Complete 18.5

1970 - Some spice, rich, blacker fruit, may be the youngest tasting of this flight, amazing texture and darker colour. There really is something different and special about the 1970 vintage, several wines I have had have this deeper darker body, with some there is a specific reason (Monprivato). Superb 18

Verdict - A dream of a flight, more because all wines showed exactly what you would want them too in terms of the perceived vintage characteristics.

A real fun evening, well organised and Pora showed very well...buy it when it is released!

Thanks to Rob and Sara...

Posted by Will Hargrove at 10:45 No comments: