I love cigars and have been interested in them since they suddenly became very popular (dare I say fashionable) 15years or so ago. I have never been a cigarette smoker as I've always played too much sport and just never

started. Over the years by interest has ebbed and flowed but is at a high at the moment. So I thought I would do a little Blog on it by answering my own questions:

Similar to wine? People often like to talk about cigars in wine terms and much as I like cigars I have far more knowledge of wine and have to say there is no way, to my mind, that you get the same amount of variety and diversity as you get in wines. There are similarities in how and when you enjoy and the fact that one country is the "boss" (France/Cuba) but I recon it ends there. There is however one definite similarity and that is ageing - I am now trying to start to buy a few boxes of cigars to age over the next 5-10 or so years. This is for the very same reason as with wine. The cigars become more harmonius and complex over time. At the moment the only cigars I have are in the small humidor pictured, which works well but is not a long term solution. 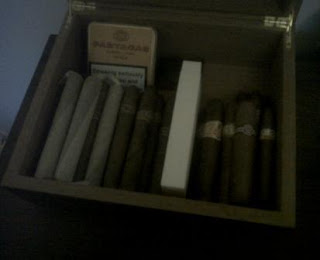 What Sizes? I have to say that practicality comes into play here, with a busy life (everyone says that) I don't have time to sit around outside for over an hour very often so I want a good cigar that gets you flavour in 30-50 minutes. I therefore tend to buy cigars in the 4-6 inch range and with a ring gauge (basically measured upto 50, which is an inch) of 38-50. This just fits the bill for me.
When to smoke? For me mainly on the backstep at home with a drink and just sit and may be read the racing post whilst the world goes past. The other two places are because of being relaxed and outside - Golf and Racing - neither of which I do as often as I would like but both of which suit a cigar perfectly.
Which Brands? My top 5 in no order would be Partagas, Hoyo de Monterry, Cohiba, Trinidad & Sancho Panza - there are plenty of others I have liked over the years but my reasoning for the above is:
Partagas - the Serie D I think is a bit of an Icon which draws you to try it but it is very good, the Short is a very good and useful cigar too, if I have to smoke mini's then I have always found Partagas the best.
Hoyo de Monterry - I have just simply found very balanced, a good daytime smoke and very Cuban without being too over powering, it is great to see the extra sizes being added like the Petit Robusto, possibly if I had to have one brand this would be it.
Cohiba - the basic reason here is that I have always want to be skeptical about "new" brands and therefore it has taken a fair bit to win me over on this one but that is definitely the case, a good smoke that I like very much even thought there is still a price premium.
Trinidad - in a slightly similar way to Cohiba I wondered what all the fuss was about and to be honest when there was only the Lancero (long thin) size I didn't bother with them but I have to say that the Reyes is probably a new favourite daytime smoke and the Robusto "T" a great one too, I guess what I am saying is that they are worth it.
Sancho Panza - this is a bit of a loyalty shout, Sancho was one of the first brands I really followed and I am still a fan, not a heavy Cuban by any measure but great value and just enjoyable, there are some 1998's on the market that really tempt me. The Belicoso is a great ring gauge and flavour at a bargain price, the non plus has always been a "go to" cigar for me.
More tasting notes and comment might follow on a future blog 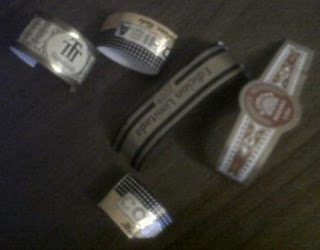 Posted by Will Hargrove at 07:06 No comments: