Back in March a customer of a colleague wanted to do a celebratory Tuscan dinner and I was roped in to help given my penchant for all things Italian. It was a cracking line up for dinner but first we had a vertical of Andrea Franchetti's Tenuta di Trinoro from Magnum. Having done a few verticals before this was an exciting prospect.

Whilst everyone gathered we started the evening with a glass of Guilio Ferrari Riserva Franciacorta 2002, I know Ferrari pretty well from Zucca days of old, this 2002 had spent 10 years on the lees and is from 100% Chardonnay having been first made in 1972. A good good fizz with character and a nutty freshness.


Then it was time to start the evening proper, to have Andrea there to lead the tasting made it all the more special. Andrea gave an overview back to the start of the estate even before the first vintage which was 1997.

Tenuta di Trinoro 2009 Magnum - This has sublime completeness, rounded ripe tannins and delicious decadent yet fresh fruits, it is a wine to drink now or in 20 years time. It comes across, and this is easy for someone who has never made wine to say, as a wine that probably made itself. Long lasting red and black fruits, no signs of oak just ripe aromas.

Tenuta di Trinoro 2007 Magnum - Andrea commented how this was a vintage characterised by a low water table and a lack of water in the season itself. The vintage, fortunately, was not excessively hot in itself. There is a more secondary nature to this wine, a little less obvious juicy fruit and a more leathery, tobacco and savoury element. It is more degraded and more animalistic, there is a spiciness too.

Tenuta di Trinoro 2003 Magnum - The 2003 is seductive and in many ways has the opposite challenges of the 2007, very hot but not without a decent reserve of water from the wet 2002 vintage. I like this wine, there is a feel of smaller more concentrated berries but not a lack of freshness. Impressive.

Tenuta di Trinoro 2000 Magnum - "So complete" is how my not starts here, at 15 years of age this is in a lovely place, neither vibrantly young nor decaying, it just begs to be drunk. Mellow soft fruit, not bruised but easy to appreciate. Some of the character of the 2009 but with the lighting dimmed down. A wine you don't really need food with...just wallow in it.

We then made our way down for dinner and a lovely classcial Tuscan inspired menu.

The wine line up was rather monumental with a great spread of wines and vintages:


Tignanello 1988 - Sangiovese based wine with a little bit of both Cabernets. 1988 is cracking all round vintage in Tuscany, often better than the famed 1985 (which owes much to the Sasscaia 1985). This was a lovely easy mellow wine at its peak, probably has been for a while. 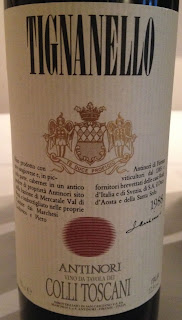 Brunello Case Basse, Soldera 1985 - I have a rather massive vertical of Soldera to write up and regular readers will know I love these wines and visit regularly so I will not dwell too long here. Tar and degraded sweet fruit, lovely. 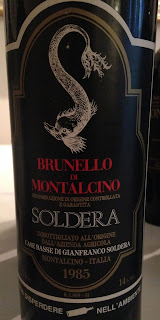 Brunello di Montalcino Riserva Biondi-Santi 1990 - An iconic winery in Brunello if not seen as the dominant producer that Soldera is. This is fully mature with a lovely decayed sweetness and a good acidity with a saline aspect too. 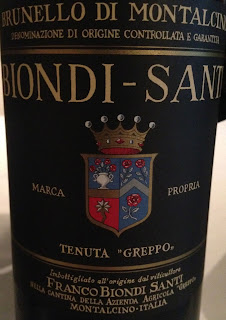 Solaia 1982 - I learnt most of what I know about this from a vertical organised five years ago by "Sussex". This had a marked mintiness, not in bad way, it is just the Cabernet Sauvignon really showing through. This is a very early Solaia as the wine was first made in 1978. There was then a 1979 but no Solaia in '80, '81, '83 and '84. An easy and quite gentle wine.

Sassicaia 1988 - In so many ways the standard bearer for the Super Tuscans. The 1988 is a superb wine, iron and dark fruit with good body but also a completeness. I love the balance of this.

Masseto 1998 - from the most Iconic of the Cabernet Sauvignon Super Tuscans in Sassicaia we move to the Merlot one in Masseto. This wine has been around even less time than Solaia with the first wine made on 1986 but the first commercially released vintage was 1987. The 1998 is a wine I know well but before this I had not had it for 3 or 4 years. It retains a real vibrancy and densely fruited nature. A wine probably only now really getting into the drinking window. Delicious.

Tenuta di Trinoro 2011 Magnum - This is a bold vintage of Andrea's wine and shows such extreme ripeness that even Andrea at times wonders if it is too much. There is a slight toning down of the richness from the 2012. I love the decadence of this and it works well at the end of the meal.

Ornus dell'Ornellia 2009 Halves - Thomas Duroux, the former winemaker, now at Palmer, planted this plot of Petit Manseng in 2003. This is a late harvest desert wine, that is a tricky wine to describe the fruit character I'd pick out most is dried Apricot possibly with a little honey.

What a great evening... 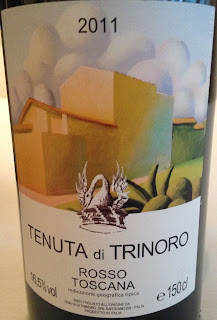