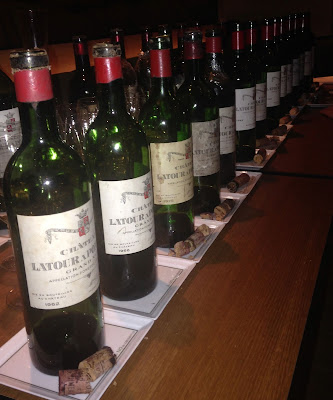 After a run of really rather amazing "Jordi dinners" over the last year or so:

I was especially looking forward to this - a very thorough look at the wines of Latour a Pomerol at Les 110 de Taillevent in London with Edouard Moueix in attendance. I have always had a real soft spot for Latour a Pomerol, now yes there might be a commercial edge to that (I work for the agent) but it is more than that. The estate has made several legendary wines. It is part of a very great collection of right bank estates in the hands of ETS JP Moueix. It still somehow seems to fly slightly under the radar. I think this is for a couple of reasons, it is made as a wine to drink, it tastes well when young but is not showy or uber-extracted. People always tend to think that something must be wrong if the legendary wines of the past have not been replicated, not so. I am always excited to open a bottle, even more so a magnum of course, of Latour a Pomerol. 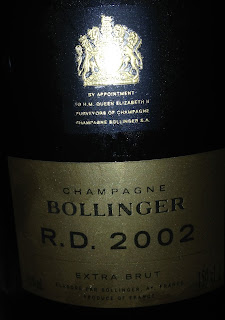 A few stats and background on Latour a Pomerol
7.9 hectares
90% Merlot
10% Cabernet Franc
Two plots: Firstly the nucleus which is 5 ha from the original Clos de Grandes-Vignes located on the central plateau on gravel soils close to l'Eglise St-Jean. The second plot named l'Ecole is located around the Chateau adjacent to La Grave a Pomerol on gravel soils and produces a slightly lighter wine than the first plot.
Production: Around 2500 cases a year, with no second wine

The team at "110" did well with the wines and the full menu can be seen here (a few pics are at the end of the post). 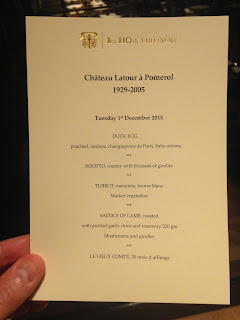 I have resisted the temptation to score the wines in this post. I would find it very difficult and therefore it is rather pointless. When comparing a wine that is young (2005) with a wine that is very old (1929) what do you really achieve with scores?

Bollinger started us off as so often at Jordi's dinners, it was rather apt here as the Moeuix family often serve it. R.D. 2002 en magnum was the choice here, very taut and reductive with a little mocha note, clearly will repay considerable time.

The wines were split into logical flights as below:

Recent Vintages
2005 - So full of vibrant fruit with just a dash of saline. Very moreish and alive, voluptuous but with good structure...excitingly good. As with other 2005's this is just starting to "strut it's stuff".

2000 - A little bit of stink, then opens into a wine that is lovely from now onwards, still primary in fruit but with added complexity. I would love to drink this alongside the 2005 in another 5 years. A little spice to finish. Proper!

1998 - A little more savoury and textured, a little iron on the palate . Very moreish indeed. At a lovely point in its evolution - the beginning of the second phase. The quality of the 1998 right bankers is still not really as well known as it should be. Complete.

1996 - Quite iodine like, with a little meatiness and then a very slight lack of flesh on the palate (the vintage) compared to what went before. Nice to drink now without profundity coming along. More a wine of minerality than fruit. Solid.

1995 - Really good, a vintage that has somehow not had the profile or praise it deserves. There are proper tannins here with the nicely mellowed fruit to contrast. Will age well for sure but good now. Everything as it should be. Classically Pomerol.

Mature Vintages
1990 - Sadly not a perfect bottle. there was a minty volatile edge but then an overly lean and savoury palate. A shame.

1985 - Ever so slightly muted nose initially but then this revealed a lovely red-fruited sweetness and lovely moreish (how many times do I have to say this!) texture. This is perfect now, so wonderfully drinkable, preferably in volume! There is the balance to age further by why would you. Just lovely.

1982 - Some iron-like savoury note then almost sweetness, a little blood but with lovely fresh acidity, expressive, extrovert and slightly high-toned.

It was lovely to see the wines so far had almost perfectly translated the general perceptions of the specific vintages.

Iconic 1970's
1978 en magnum - Volatile, "bricky", harsh and dried out more like 30 year old Sangiovese than Bordeaux. Edouard commented that this was almost exactly what he had expected from this substandard and very dry vintage.

Transition to ETS JP Moueix
1966 - A little more gritty and grainy and truffled than the 1971. I initially wondered if this might fade in the glass but it did the opposite getting more focused, there is a lovely nuttiness, not normally a positive in reds. There is a sweetness. Very fine.

1964 - Sightly briney, almost a note of bill-tong and pepper, lovely body with good texture and considerable power, a fully mature but not fading wine. Masculine and intriguing.

1961 - Corked, a rather collective sigh, but then one shouldn't meet their heros. 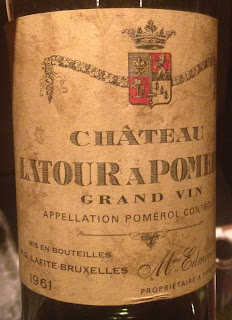 Madame Loubat
1955 - Really lifted, extrovert, superb, manages to be refined in a mellow way at the same time as being unreservedly hedonistic. Is there a better vintage for Bordeaux? My experiences of the 1955 vintage are almost universally spectacular. This was so good that I don't know I would want to have it again, if that makes any sense. 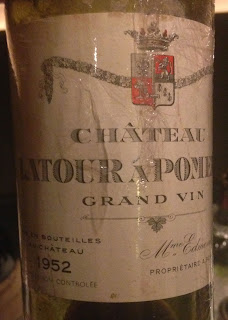 1953 - I think this suffered from following the captivating 1955 because in every other way it was glorious, a little creme brulee richness on the nose. Decadent.

1952 - Clearly a cooler vintage, bricky and a little lactic, a very slight Bual character, just a well-bred wine that is getting weary.

1949 - Quite high toned and a shade volatile, a little madeirised and delicate.

1937 - Butch and rich but then disjointed not quite sure what this was, very dry and did not really fit with the other wines. 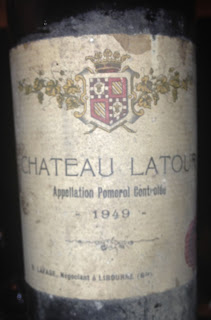 1929 - High and dry, a little pithy, the palate is clean but totally dried out, rasping. The acidity means it is drinkable but astringent. By all accounts a very small crop with heat in September.

Climens 1942 - Sweet cep nose, mushrooms and brioche, oranges and now quite dry. weirdly would have made a good appetizing aperitif as well as a fascinating ending.

So what would I say in conclusion or summary? Well, Latour a Pomerol certainly has a great past but it is the present and the future that were the learning for me. I think everyone around the table, with the possible exception of Edouard who already knew, was very pleased to see how beautifully the younger vintages drank. Any site that can make wines as brilliant as the 1955 and 2005 but 50 years apart is exciting. There is a grace and elegance to Latour a Pomerol that can almost work against it in terms of standing out around En primeur time or in amongst other showier, glossier wines at tastings. To me Latour a Pomerol remains a very very good Pomerol that portrays the character of a vintage very well and drinks so splendidly...long may it continue! Thanks for the opportunity to taste these Jordi!