It has taken me a long time to write this one up - I am not completely sure why, but when you see the line up may be I was a little intimated by the unique array of wines. It was a simply brilliant dinner to celebrate Jordi's 40th Birthday. The wines were, with I think one exception, supplied by the man himself.

La Trompette in Chiswick was the venue and a brilliant job they did too. The food, listed below with a few pics at the bottom of the post, was superb, never showing too much ego just complementing the wines.

So onto the wines then, each pair or trio was shown blind briefly before a reveal:

Bollinger Grand Annee 1982 en Magnum was our starting point with a lovely mellow, toasty notes, some nuttiness but not bready. There was good focus to this mature Champagne.

When I caught a glance of the white pair which was not served blind I was instantly excited. Having been smitten by so many Coche wines down the years I has always wasted to drink the Corton-Charlemagne. The 2005's from Coche are rightly lauded as exceptional, early picking the key, so Corton Charlemagne Grand Cru 2005, Coche-Dury had a bit of a reputation to live up to. It did so effortlessly. My notes are just a list of adjectives; persistent, dense, acidity, freshness, luscious, endless, refined, wow! To be flippant it was just delicious. You could savour it over days or throw it back, as with all great wines it begged to be drunk. To then have it with Montrachet Grand Cru 1986 from Ramonet was some treat. Even more of a treat was the fact that this did not turn into a battle or competition, the verve of one complemented the maturity of the other. The Ramonet had some of this producers classic signatures; Lanolin, ginger, spice, a little more ginger then nutmeg. It was heady and rich but not heavy.

So from Burgundy it was a trip west to Bordeaux for the next pair. There is some exceptional "value" to be had in mature white Bordeaux. The Laville Haut Brion Blanc 1966 had a note of green fruit, lovely verve and freshness, there was, amazingly, a district sauvignon note to this. An unctuous depth. Splendid wine. By contrast the Haut brion Blanc 1985 was deeply frustrating as you could glimpse a great wine but it was in some way unclean. In agreement with others it didn't seem corked to me (and didn't get worse with air) but was not what it clearly was underneath. 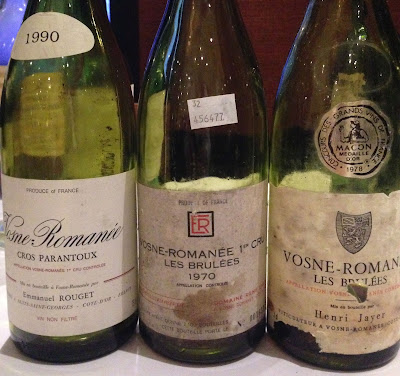 Any frustration evaporated rather rapidly and here are the three reasons. Vosnee Romanee Cros Parantoux 1990 from E.Rouget was superb, ripeness, richness, sturdy. The ripeness had good depth and some grit. With time some leather and spice, this was very much the opulent texture of the lavish 1990's. Then a little more age, Vosnee Romanee Les Brulées  1977 from H.Jayer, sweet, rounded and charming, so elegant so seductive, complex and absolutely "a point". Such a treat. The final Musketeer, Vosnee Romanee Les Brulées 1970, R.Engel with oranges, dried herbs, tea, some sweetness, bricky acidity and a slightly citric edge, almost a note of cherry, good now and probably not worth holding longer. What a trio! 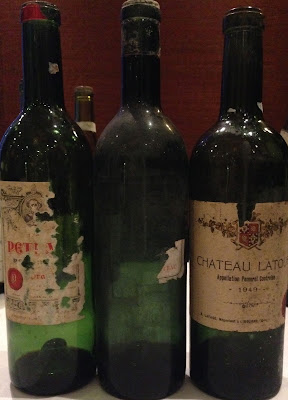 BUT…then another trifecta was shown. The Moueix flight! Petrus 1960 was tropically high toned, as always with Petrus, stunning, iron like, extravagant, complete, so textured, so dense with some good acidity, succulent…just so "Petrus". Trotanoy 1955 was a delight, such a good vintage, iron-like richness, blood and meat, a lovely maturity with good acidity, almost a mocha note, magical finish, so moreish. Very different to the Petrus but complimentary. Latour a Pomerol 1949 (more - rather a lot more - of which coming on another blog soon) had more sinew, grip, a savoury edge, lovely grittiness, a shade of bovril, slightly dry toffee finish. By this stage it was already a dinner of a lifetime but wait there is more!

The next two wines, both Burgundy, couldn't have been much more different. First there was Chambertin Grand Cru - Domaine Marion - 1959 from Lionel.J.Bruck en Magnum which had an extravagant nose and lusciously dark core, having this blind I think we were almost all in the Rhone and possibly this wine may have had some help before bottling from that area! It just had a "pepped" up feel to it with a funky grip. The next wine - Romanee Conti Grand Cru 1958 - just simply could not have been more different. Pure elegance, tea and sweet degraded fruits, good energy, gentle and effortless, sweetness again and rosewater delicacy, long and persistent. Special. 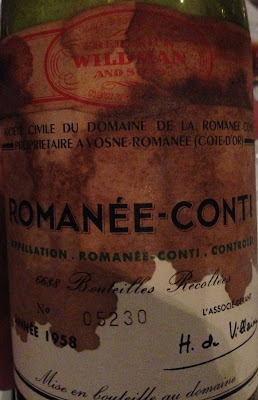 Jordi is well know for his love of older wines and whilst we had been "mucking about" with some mature bottles I think he felt it was time to ramp things up and how lucky we were to try these next two but also for them both to show as you could only hope they might.

Margaux 1900 (Deuxième Vin) had a note of candle wax and bananas, this passed and then there was lush texture of aged purple fruit, lovely, iron showed through amazingly it literally seemed to get younger and younger!! Then going back 30 years further Lafite 1870. This was all iron grit and a little metal then a very clear left bank character came through as the wine gained sweetness and showed more and more of that textbook Cabernet character albeit melded with the maturity…pretty staggering really. We then had the chance to revisit the glasses in front of us and try and take the enormity of what we had been drinking. The good thing was that in all other respects the dinner was just a lot of fun with good stories and views, some nice anecdotes - a good celebration. 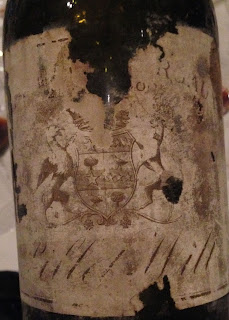 To round things off we had a Madeira from Henriques & Henriques the 1898 Boal Solera this had a very distinct; menthol and pine resin nose then the classical Maderia acidity.

All that really remains is to thank Jordi for the bottles opened, so many of which there is no chance I will ever have again! A special evening. 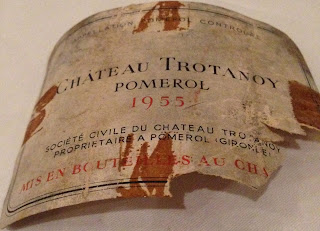