I am very late in posting this but there we go!

Our annual family trip down to Wales (back in May!) for a week is always great chance to try lots of bottles especially with my "Cousin -in-law" Cynan who loves his wine, having contributed lots of the below, and cooks amazing food!

24-5-14
CNDP VV Blanc 2011, Tardieu-laurent
Lovely, a bit of oak but "in check", richness of white fruits and a little sweet toffee, so drinkable. 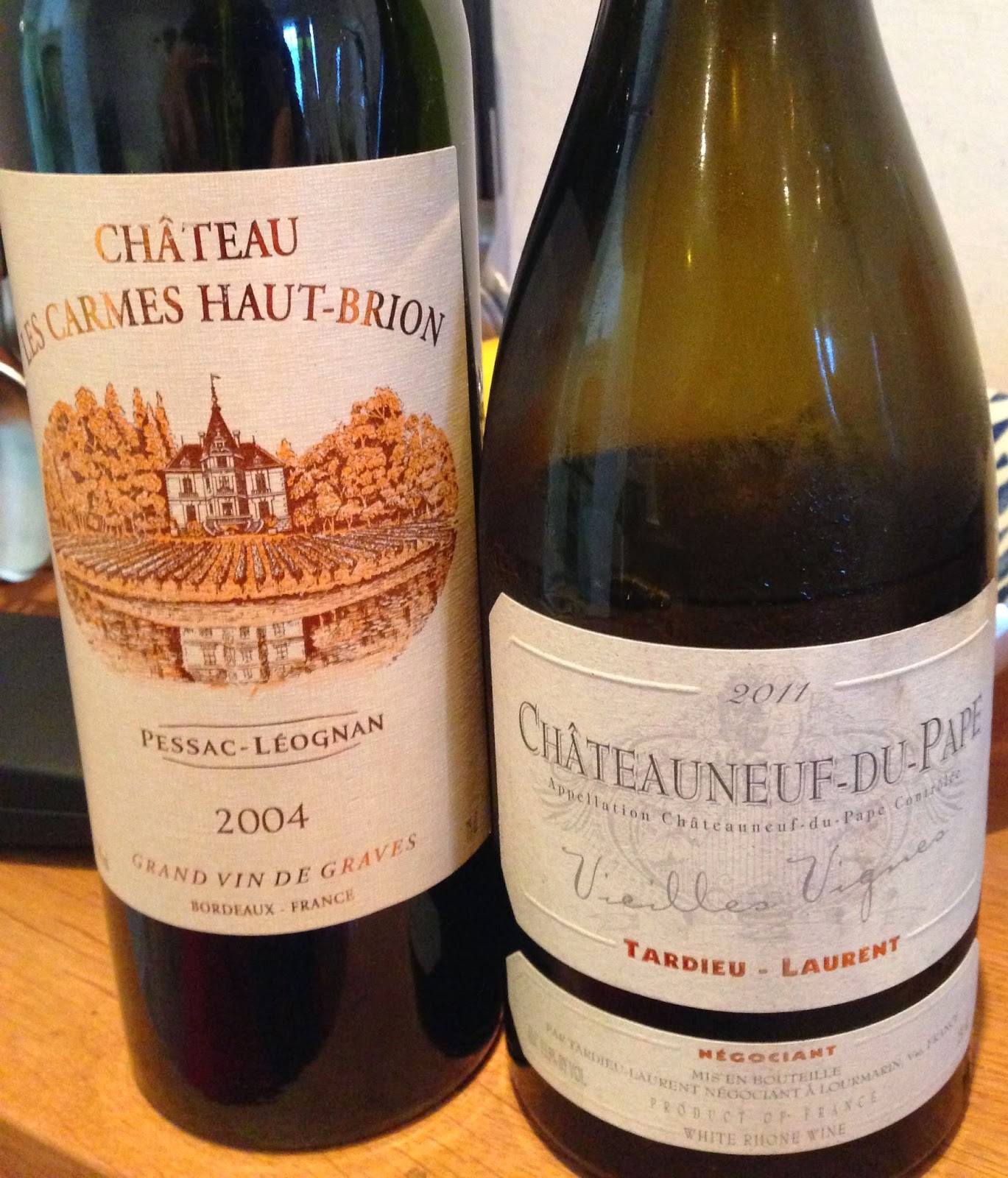 Les Carmes-Haut-Brion 2004
Good nose or classical cedar, black fruit and gravel…the palate is a little dry now and a little foursquare. The sweetness does not last. having had this a few times I am ever so slightly disappointed by it's balance now.

Very taut and mineral, white fruit may be but mostly stones and acidity. The screw cap closure I think makes it even more exaggerated would be interesting if decanted. Decent though.

Chablis 1er Cru Vaillons 2007, Vincent Dampt
In good shape with an unctuous nutty (unsalted) texture. Needs food really as there is a slight side of oxidation without it.

CNDP VV Blanc 2011, Tardieu-laurent
Lovely again, a bit of oak but in check, richness of white fruits and a little sweet toffee, so drinkable. Very good with cheese and still balanced at a warmer temperature. Fond of this! 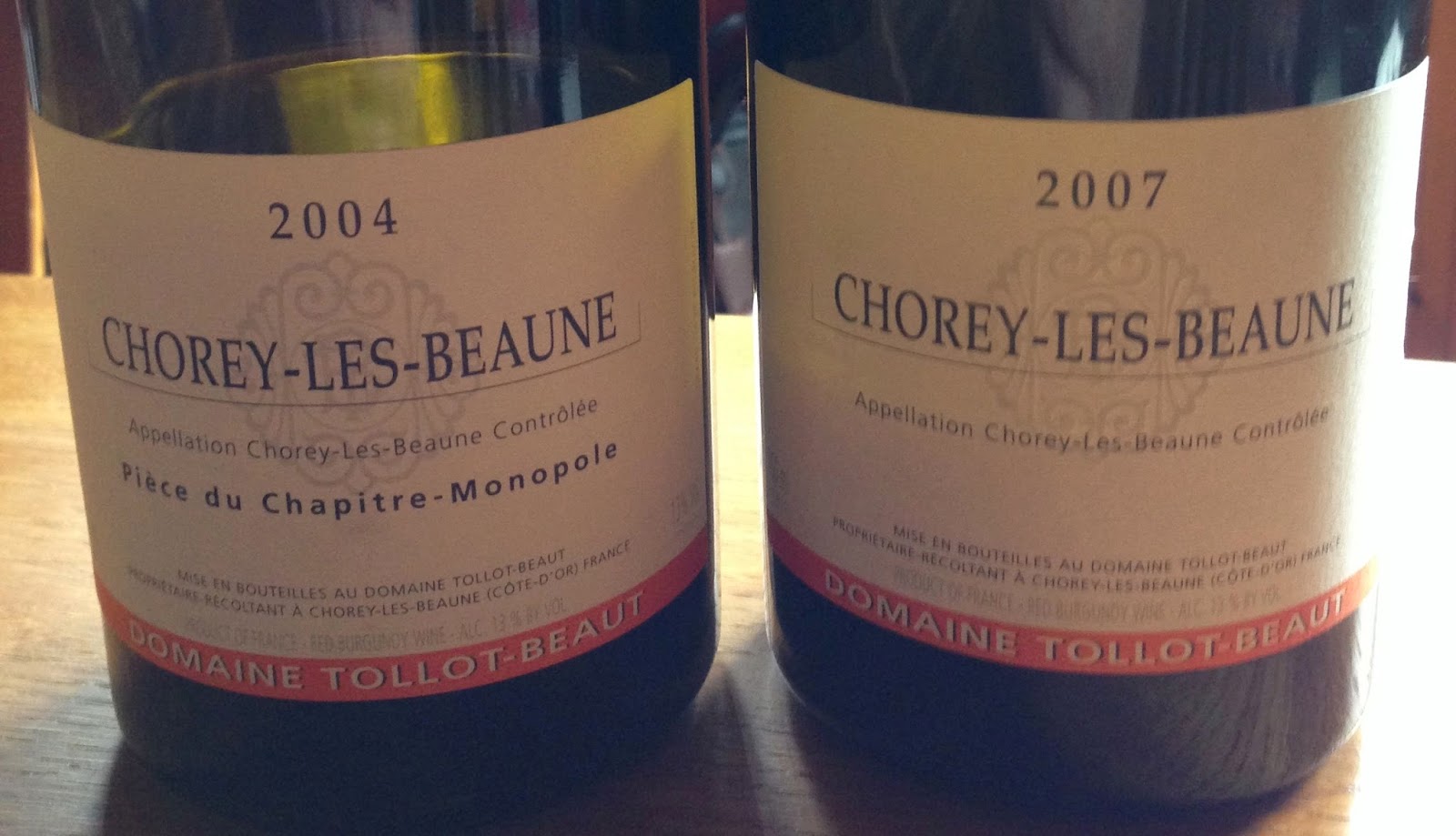 Chorey-Les-Beaune Piece du Chapitre 2004, Domaine Tollot-Beaut
Nice wine with elegance and not at all forced, slightly lifted green/red fruit, not amazing but a decent 2004.

Chorey-Les-Beaune Piece du Chapitre 2007, Domaine Tollot-Beaut
A more decadent fruit than the 2004, more black amongst the red, good and enjoyable, nicely balanced, I like this. 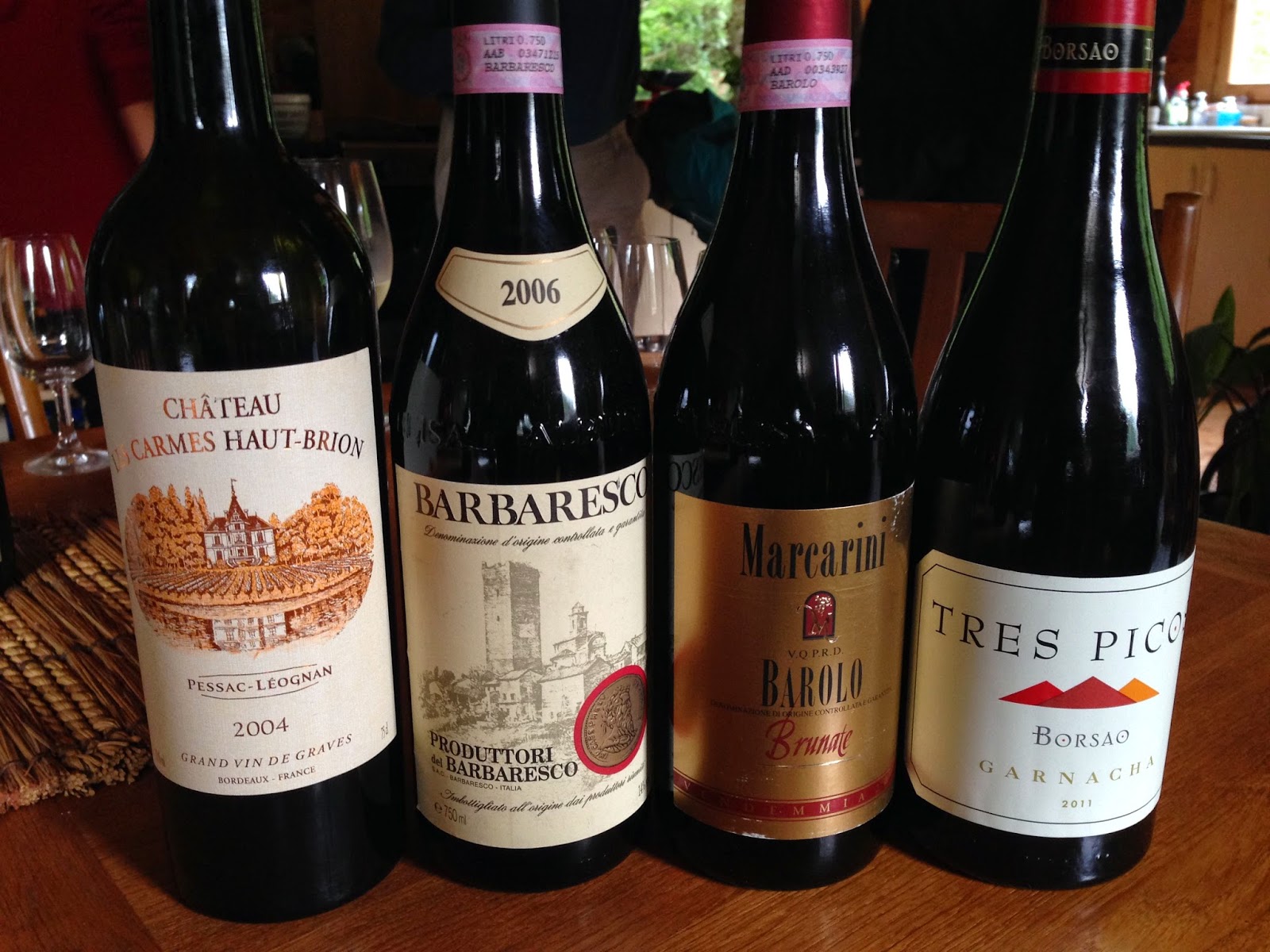 Les Carmes-Haut-Brion 2004
The end of the bottle from the day before, a little drier but still ok.

Barbaresco 2006, Produttori del Barbaresco
Lovely, gentle for 2006 with a nice fragrance, there is the grip you expect of 2006 but it is not a waste to drink now.

Barolo Brunate 2006, Marcarini
Quite a silky wine for a 2006, so more "Brunate" in style than it is 2006 in style. Good texture and not pronounced tannin. I liked this also.

Passopisciaro 2006 Double magnum
Crunchy red bruised fruit, a lovely nervousness and life, lifted, not light in flavour but not dense in texture. Great minerality and if anything even better on day 2. You can tell the Contrada’s (the single vineyard sites that until 2008 went into the generic wine) are in here. 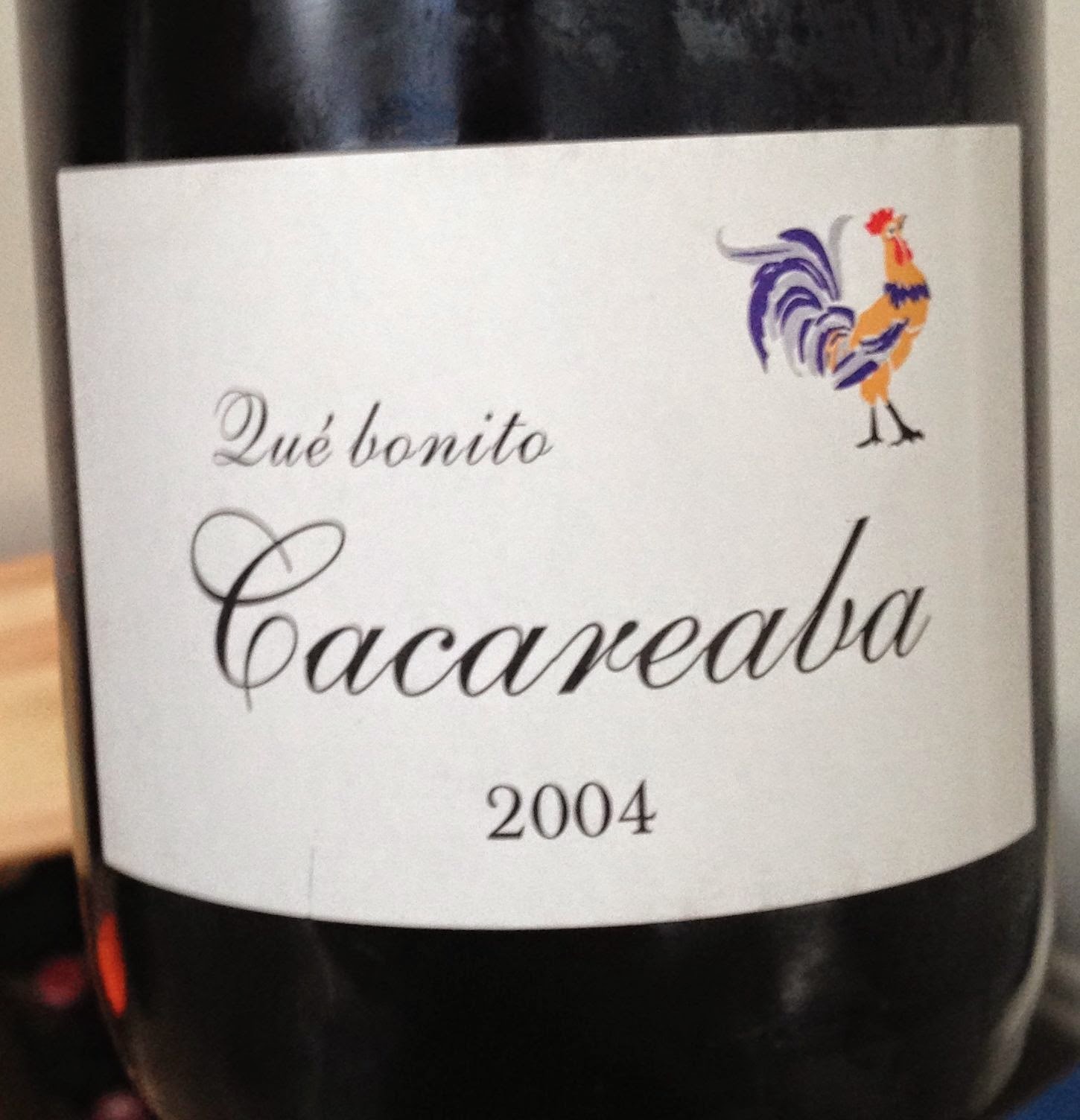 27-5-14
Que Bonito Cacareaba 2004, Benjamin Romeo
Oranges and Melons with delicious unctuousness. There is some acidity but it is very soft, almost a creamy texture with some botrytis. Entering a slightly lifeless stage. my last bottle gone, always meant to leave one for decades but...

Barolo Villero 2007, Brovia
Understated lightness as though they have picked very early to avoid the heat, there is almost a spritz, it was fine to drink but I am not sure it’s quite right. Second time I have had it and I remain unconvinced.

Passopisciaro 2006 Dmag
Again and getting better if anything!

Recioto della Valpolicella 2010, Tesauro
Lots of dark cherry and a few forest fruits then intensity of viscosity and chocolate, long, intense but not without refinement and class. Good.

Barolo Cannubbio 2007, Francesco Rinaldi
Quite dense and structured, not too warm. There is focus and I really think this estate did well in 2007.

Recioto della Valpolicella 2010, Tesauro
Good again not oxidised at all despite half open bottle from previous evening. 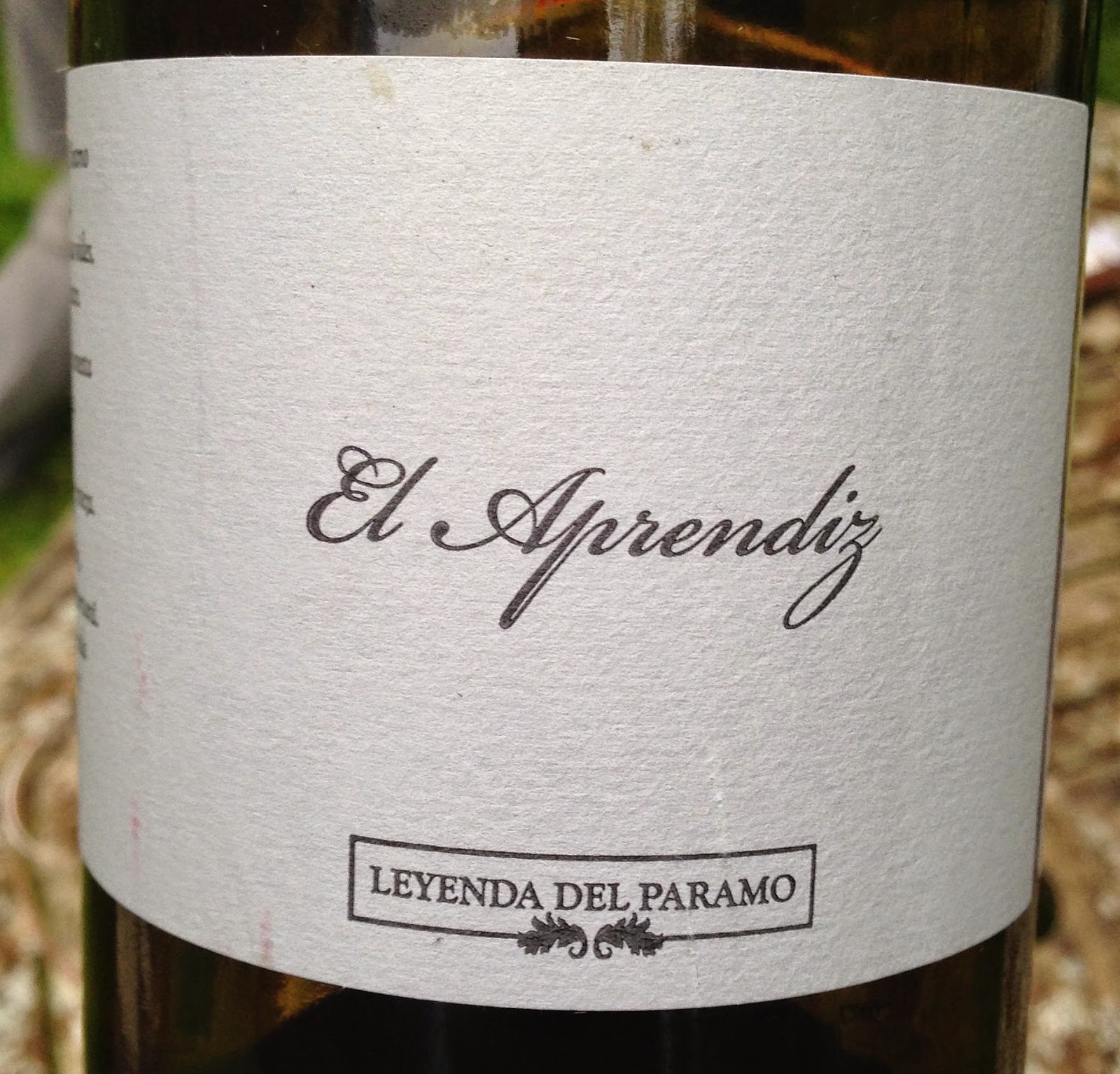 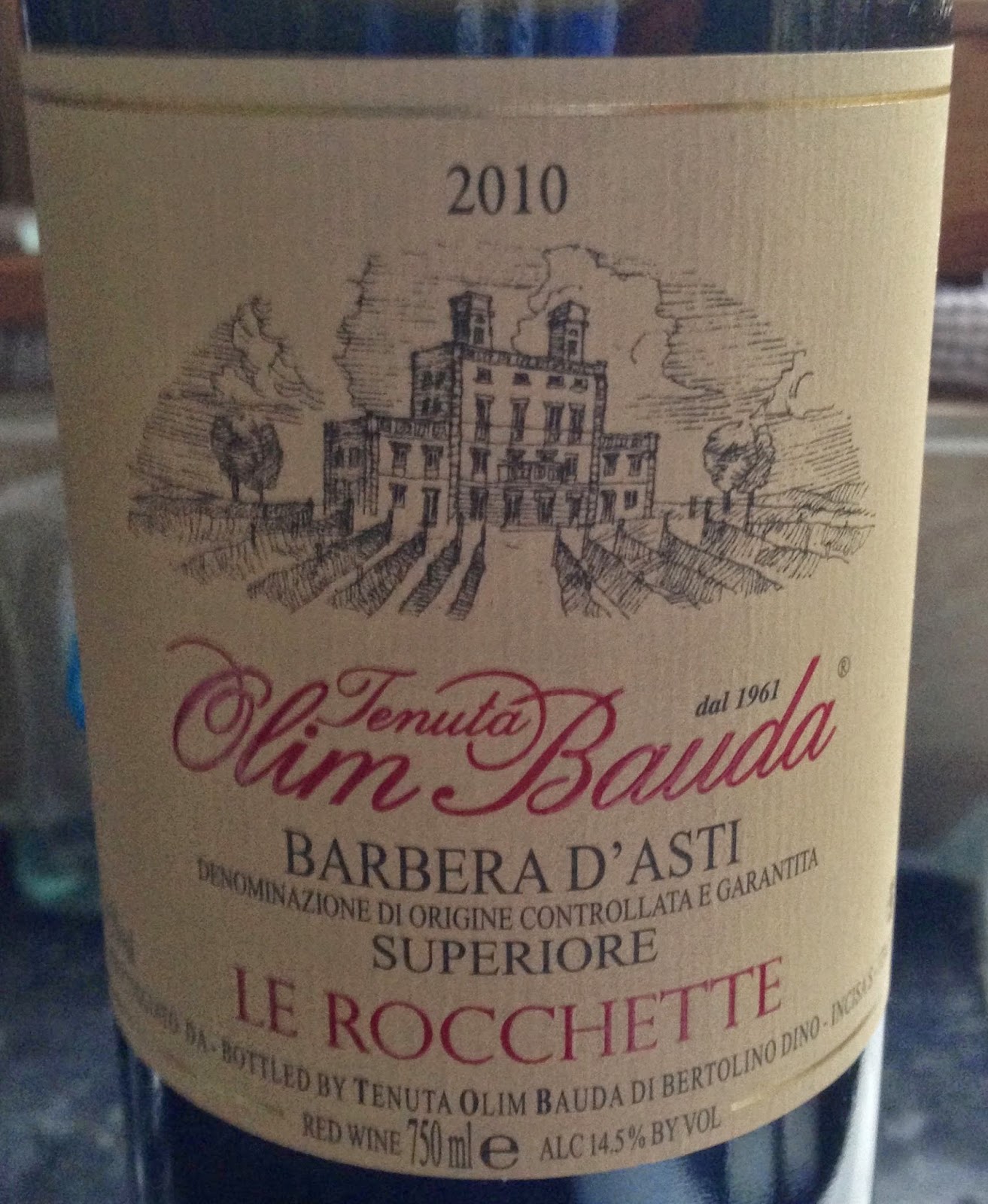 I am sure there are bottles I have missed!
Posted by Will Hargrove at 03:46