As the photos below suggest our last morning was a cold, foggy and damp one….I had been looking forward to both the day’s visits - d’Angerville and Close de Tart - as I have recently met both Guillaume d’Angerville and Sylvain Pitiot in London and both struck me as charming yet serious “Winemen”, a nice balance I think.

ure of the vineyard, not to mention the steepness! As soon as we arrived Guillaume suggested a tour of the vineyard, Alison and I jumped at the chance and go into Guillaume’s run around. First we went through the Village and out the other side straight into Taillepieds (the north eastern corner of whch is in the photo on the right) which sits just above the larger Champans. As much as anywhere in Burgundy you really get the feeling in Volnay that the various vineyards have such different slopes and aspects and soils. It was a fascinating tour including some new holdings (Clos des Anges 1er Cru). After the tour we were back at the Domaine to taste the 2008’s. Starting with the Bourgogne Rouge, which doesn’t come into the UK, and working our way all the way up to the Clos de Ducs before trying the one white, Meursa 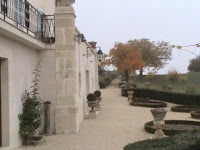 ult 1re Cru Santenots. The overall impression was of a sleek, feminine and above all pure vintage. The wines gradually climbed in stature with it hard to differentiate in scoring terms but easy in taste terms. The Taillepieds and Caillerets possibly pipped it for me with the stunning Clos des Ducs the most clearly in need of time. The Meursault was stunning too…one to buy for me! It was very kind of Guillaume to give us so much time and this was another visit that left me impressed by Volnay.

And then for the weeks last visit…..Clos de Tart. Sylvain Pitiot met us at the immaculately kept domaine and we went straight into the vineyard, the first thing you notice, or at least you should, is how the vines run north-south rather than east-west. This helps to prevent soil erosion on the slop, it is also much harder to work the vineyard but then it is not the easy life that Clos de Tart wants it is all out for quality. Surprisingly the size of crop will be almost exactly the same in 2008 as it was in 2007, most other domaine’s were down in 2008. Sylvain explained that this was down to a massive amount of work in the vineyard that meant there was very little selection to do when the harvest was brought in. Each plot of the vineyard, there are 6 distinct parcels, is vinified separately. Really there is only one wine produced here (there is sometimes a La Forge de Tart from young vines but whether this is made is not decided until much later), we tasted three

different cuvees, one the young vines, one from whole bunches and one 50% de-stemmed. A really interesting exercise, the young vines combined red with black fruits and good concentration, the “whole bunch” pressed wine tasted more structured (as logic would dictate) with a touch of white pepper and spice, great length. The 50% de-stemmed was a little more subtle with a classical nose, delicious mix of red and black fruits, big but balanced…impressive. It is the continual experimentation and questioning of the status quo that makes Clos de Tart so exciting.

And that, as they say, is that, the car (no C&B limo) was left at Dijon station…..slept on the train to Paris, lugged my half broken bag back home and now Burgundy makes a whole load more sense……I’ll be going back. 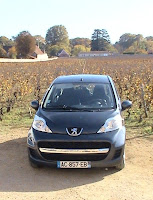