The day broke with blue skies again, perfect for getting the all importance sense of location and space. The autumn colours were showing every vineyard in a different shade, a real patchwork effect. On route t

o our first tasting we were stopping at signposts to take pictures for the marketing team who had demanded, well, asked anyway, that they were needed for offers the website etc. C&B embracing the modern era. Having spent the second night in Dijon it was also time to decamp to Beaune but this would have to wait until after the first visit of the day.

I had been really looking forward to seeing and tasting at Roty, Domaine Joseph Roty and Philippe Roty (pictured, below) are both producers that we have worked with for ages but so sought after are the wines that we rarely have any to taste in bottle, having sold them all on release. Really this is one Domaine with two names the only difference is that Philippe’s wines are made across the road (literally) whereas the Domaine Joseph Roty wines are Philippe, his mother and sister as a collective. A little like Gilles Jourdan this is not for those wanting any sort of marketing or “showroom pampering” this is about good winemaking with good ingredients and top quality results. It’s also not a small tasting with 19 wines all from 2007 – 2 whites, 1 rose (the only one of the trip…in my eyes a good thing) and 16 reds. Roty release their wines a year later once in bottle hence t

asting the 2007’s not 2008’s. The winemaking is kept simple with, generally, 18 months oak for the reds (little of it new) and 100% de-stemming. Philippe said that 2007 was “very much their sort of vintage”. The whites were very mineral and will repay patience as is the case with the majority of 07 whites. Interestingly the Bourgogne Blanc is a blend of Pinot Blanc and Chardonnay. The rose was good but not my sort of thing – apologies but I’m not a rose fan. Moving to the reds there is a very “Pinot” feel about them with the fruit always expressive and backed up with a genuine but not over powering structure and a really wonderful minerality. There are four Marsannay’s, a lot by anyone’s standards, but they are mighty fine and I have “buy” written large by the Marsannay Ouzelois. Likewise for the Cotes de Nuits from Philip

pe’s own vines. Having said that there is a real step up to the Gevrey’s with the Champs Cheny tasting superbly. The Gevrey La Brunelle (picturd on right) is a Clos (walled vineyard) in the “garden” out the back of the Roty’s house and it very much has it’s micro climate. The Chambertin Grand Cru’s of Mazis, Griottes and Charmes were all superb with all three scoring 18-19+ with me. Philippe and family gave us lots of time and the visit was a revelation, for me one of the highlight’s of the whole trip.


We then dropped our bags in Beaune despite parking trouble that meant the car park was shut for a Fete that never actually appeared all week, grabbed a quick lunch and set off for Puligny. 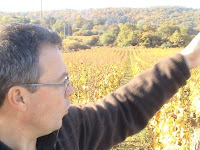 ux (below) met us at Olivier Leflaive and offered a very kind and massively useful trip round the vineyards. For me this was a real education as Franck knows every inch of the finest white wine vineyards in the world, argue over it if you like, but from Meursault down to Chassagne has to be the place for the world’s greatest whites. We set off from Puligny towards Meursault looking at how the slope and aspect largely determines the classification – which wherever you go nobody seems to disagree with. In general the flat land at the bottom of the slope is Bourgogne Blanc then as the slope starts you have villages, then on the middle of the slope we are into 1er Cru or in places Grand Cru and then at the top you have an assortment of vineyards that can be real gems, St.Aubin above Montrachet or Auxey-Duresses above and beyond Meursault. Once we had been round Meursault, taking in Clos du Cromin (below right, with Meursault behind), we ma 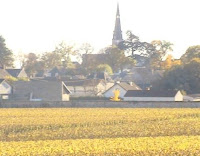 de our way up to Auxey-Duresses along the top of the Puligny 1er Cru’s to St.Aubin and then back down to the cr

ossroads (left) where you have Le Montrachet top left, Batard Montrachet top right, Criots Batard front right and Chassagne Blanchots bottom left - all just showing how intricate a region Burgundy is. Having done the tour we jetted back to Oliver Leflaive to taste. As we have already offered the 2008’s Olivier Leflaive wines Franck decided, sensibly, we didn’t need to taste them all but instead we would look at thre

e 08 Liet Dits (named single vineyards but not 1er Cru’s) and then compare them to three 1er Cru’s. The first three were Meursault Clos du Cromin, Puligny Les Meix (a personal favorite) & Chassagne Les Blanchots – all tasting well with the Puligny just the pick for both Alison and I. We then compared them to Meursault 1er Cru Poruzots, Puligny 1er Cru Les Referts & Chassagne 1er Cru Abbaye de Morgeot – the step up was abundantly clear in the texture and length as much as anything – a good experiment. We finished off with Puligny 1er Cru Les Referts 2005 which whilst still young was starting to show well, to drink now I would decant first. We then had to leave in a little bit of a rush to head north but managed to say hello to Olivier himself on the way……Thanks go to Franck for his time and energy!


Next stop was currently the most northerly Grand Cru white (can you name the one that is further north but not currently produced?) – Bonneau du Martray, somehow in nearly a decade of working with the wines of Bonneau du Martray I have never met Jean-Charles Le Bault de la Moriniere. We arrived in darkness which was a shame but it did have the advantage of Jea

n-Charles saying I must come back to see the vineyards…..that is an offer he wont need to repeat. Having discussed the market and p

resented the “fresh of the press” offer - the 2008’s are already all but sold out – we went through next door to taste. To say that Jean-Charles is a perfectionist is almost not strong enough a phrase, everything is examined and considered every step of the way. The barrels used for ageing the wine (a third of which is new oak) are all hand selected and the coopers even return to taste the wines from their barrels. Since 1969 Jean Charles has only missed one harvest, the hot 1976. We tasted (short notes):

Corton Charlemagne
2008 Elegant and fine with beautiful texture.
2007 Still tight and very classical, all there but hiding! Beautiful.
2006 Broader (relatively speaking), more lush and a little more flashy, still very Bonneau.
2005* Some smokeyness, a little closed, texture is superb. Delicious with Pata Negra - top tip from Jean-Charles
2003* Such a charmer, opulent but not overblown, delicious
1999* Very much my sort of Burgundy, lovely and beginning to drink well
1991* Good texture but possibly to my mind the one wine that had suffered from being open so long.
*opened 3 days previous – we like to do this in the tasting room here too, gives a good idea of the wines potential and pedigree, we encourage producers to do it too

There is always a wonderfully crystal clear and light colour about the Corton Charlemagne that is often not seen in other wines, the style is all about elegance but with a taut core that allows for gracious aging.

The tasting did not finish until 8.30 and Jean-Charles was very generous with his time. We very much hope to do another dinner or Masterclass this year, I was delighted to have finally made it to Bonneau. Next years release (2009) will be our 10th anniversary – I can’t believe how quickly that has come around.

Over dinner we discussed the wines and tried a 2005 Volnay from Lafon that was dense tight and not for drinking now (as seems the way with so many 2005’s now). The group on the table next door to us were in Burgundy tasting on a trip from Canada and very kindly offered us a taste of their Vosnee Romanee 2005 from Meo Camuzet which sold the same story….good but not now!
Posted by Will Hargrove at 03:12