The sun was well and truly out again, first visit was at a Negociant house we don’t deal with but that we had been asked to visit / taste at by a UK contact. The wines were good and as the range is wide and the use of oak subdued there may be some business to be done in the future but probably more with a view to restaurants who need to buy regular stocks rather than anything more but I guess we’ll see, very worth while though. 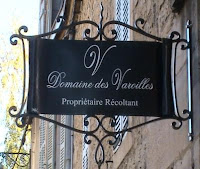 Christmas offer. It is a difficult task sometimes to balance doing well selling wines on release but then also having something to get your teeth into for drinking a year or two later. Varoilles (as well as few other Domaines) keep some stock back for just this reason. Essentially we tasted the 2001’s and 2002’s. What was interesting was that the 2002 were starting to show a little “animal” development where the fruit and the body were becoming one and the farmyard aromas start to come through, with sweet fruit this makes for good balance and great food wines. The 2001’s by contrast were more obviously Pinot and more primary with definite red fruits on the nose and palate. Clos de Varoilles 2001 was a real highlight. A delicious contrast and we will definitely me buying!! There was one curveball of a wine which was 2007 Yvorne L’Oraille from Varoilles sister estate in Switzerland…my note has Chablis meets sancerre…it was a nice “lunch-time” style wine 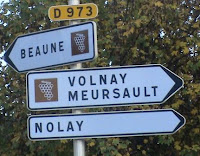 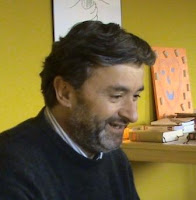 t (Pictured). Marc-Emmanuel Cyriot, who’s own Domaine (Cyriot-Buthiau) in Pommard we were to see later, looks after the commercial side for Henri. The wines Henri makes, always with classical music in the background, are almost Chablis-esque in minerality and there is little or not new oak (5% at most). The colour is very light and the wines are beautifully elegant, definitely good decanting whites. It was the 2008’s first up there are two Pulignys; Villages (1

7) and 1er Cru Champ Gain (17-18) and two Meursaults; Clos du Domaine (17), a Liet Dit that includes Henri’s back garden and 1er Cru Richemont (17+). Having tasted the lithe and tight 2008’s we then tasted the same wines from 2007 which is such a classical vintage that it really plays to Henri’s style….a Domaine to get to know if you like producers like Matrot and Javillier.


From Henri’s we went over and up the road to Pommard following Marc-Emmanuel (left, talking with Henri and Alison)in our trusty car (see Day 5 for photo – we may have Warrant

s but we’re not proud!). The Cyriot-Buthiau Domaine was newly formed in 1989 but from holdings that essentially go back to the 1920’s. From 1999 a decision was take by Marc-Emmanuel and his wine maker brother to invest and change the winemaking, 100% de-stemming in most vintages (possibly not in 2009), with 5 days cold maceration and pigeage not remontage. The Domaine is not certified BO (organic) but has not used any fertilizers in over 8years. As we tend to buy the Cyriot-Buthiau wines when finished and in bottle we tasted the 2007’s which will in time follow the 2006’s we currently sell. The wines were very true to their appellations – Santenay, Volnay and Pommard. There is an elegant structure about them and I can see them getting better and better.

Only Day 5 to go but what a day…..D’Angerville and Clos de Tart…