Bit misty this morning but it burnt off eventually.

As for day 2 we started in Gevrey - Domaine Trapet was first up with Jean-Louis and Andree as welcoming as ever. The tasting was big (24 wines) and diverse. There is so much to like about the Trapet

wines, Jean-Louis’ inquisitive nature means there is always something new being tried (1998 saw an early move to biodynamics) and this year it is a “Flowform Mixing System”, which sounds more Ibiza than Burgundy, but actually it is a mixing system for biodynamic “preparations” used for amongst other things, actively aerating organic compost tea, creating liquid fertilizers, improving water quality in ponds and mixing of juices. The basic idea is of two rotating paddles that go in opposite directions therefore creating an infinite flow in the vat. Anyway enough technical stuff the actual wines (2008’s) were mighty impressive, the relatively humble Marsannay being a real star. Moving up through the Gevrey’s (Ostrea a bargain I think) to the Chambertin you have really great balance and very much proper Burgundy. We then tasted through the 2007’s. I think that comparing 2007’s and 2008’s over the next decade or so will be a really enjoyable; there is a similarity between the vintages in terms of weight but a very different style. The 2007’s, having been in bottle for a little while were a bit more reserved and suggested a little time was needed but there was a sublime balance. Then we were onto the 2008 whites, the Marsannay with 10% Pinot Gris, they were opulent and almost drinkable now. Following that we tasted the Trapet’s Alsace wines – I think I will write them up another time. A good tasting!

The emphasis then shifted towards whites as we sped down the road to Meursault to find Patrick Javillier, this is not easy as there is a shop in Meursault with his name on it, a sign to his house but no signs to where we were tasting. Alison decided to use “the force” and managed to locate it straight away…this became a theme whenever we over thought about where things were we got lost but as soon as we just drove it all seemed to work!! We were supposed to be tasting with

Patrick’s Canadian agent but sadly he was ill. The tasting with Patrick and his daughter Marianne was very informative. The Javillier style is all about pure citrus fruit and minerality with incredibly subtle use of, mostly older, oak. We discussed decanting and Patrick is very much a fan of giving his whites, when young, 30 minutes in a decanter – I certainly advise this too…the fruit really comes out. The watchwords on 2008 here were “vivacity, acidity and typicity”. We started with his two Bourgogne Blancs, in my opinion two of the finest there are, Cuvee Forgets and Oligocene, lovely elegance and minerality. We then tasted his Savigny and the Meursaults – Clos du Cromin (elegant, no new oak), Tillets (lovely), Clousots (a blend of Les Crotots & Les Clous), Tete de Murger (a blend of Les Caisse Tetes for minerality and Murger de Monthelie for power). Lovely balanced understated wines for the true burgundy lover.

And then……back to Gevrey again!!

Interestingly we were now tasting at Rossignol Trapet. Interesting because there was initially one T

rapet in Gevrey but in 1990 the family domain was split into the two Domaines of today Trapet as tasted above and Rossignol Trapet. The styles are slightly different but the quality at both very high. Brothers Nicolas and David met us and we tasted with both. Due to a cycling injury to his hand Nicolas couldn’t wield the pipette. The style especially at the more entry level is for quite big broad wines with the fruit more on the black side than red. The Bourgogne rouge and Beaune Teurons were both masculine and structured. We then tasted the 4 Gevrey’s – Villages, Etelois, Clos Prieur 1er Cru and Petit Chapelle 1er Cru – the quality and complexity climbed through the four. Latricieres Chambertin and Chapelle Chambertin w 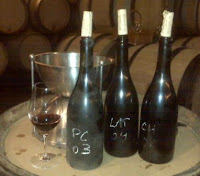 ere next with the Latricieres showing a lot of structure and coming across as a “vin de garde”. Chapelle showed a little more fruit and flesh but was also brooding. The Chambertin followed and was decadent with an element of fruitcake, very impressive. We had a taste of the Etelois 2007 which was more feminine; this was followed with a real treat in the form of Latricieres 2004 (18-19+ gorgeous), Chambertin 2004 (stunning and for anyone who is unsure of 04 they should try this). The very last wine was Petit Chapelle 2003 true to the style of 2003 and therefore rich but with a way to go. When you look at the relatively humble prices of the Grand Cru’s here I think it is a Domaine to follow!

De vogue was next on the agenda so what had already been a good day was just getting better. We taste through the reds with Francois Millet (winemaker) the whole producti

on of this very famous estate comfortably fitting into a room half the size of a tennis court with only two barrels high – the minute amount produced by the Domaines takes viewing to believe. Francois described 2008 as a “watercolour” vintage in artistic terms, by this meaning it is an elegant and graceful vintage with everything balance and nothing overpowering. The finesse of the wine was quite staggering with each one building in stature of the previous but always with a grace and reserved charm. In Francois’ own words 2008 was no easy vintage and until September there had been “only five days of BBQ”. My tasting notes just finish with the phrase “so true and elegant”, not released until march next year, these will be mighty fine wines.

Next up was Domaine Lafa 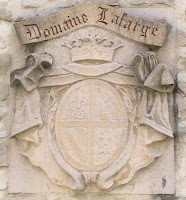 rge in Volnay and I was intrigued as to what this would like. My previous experience of the wines was incredibly limited. After two hours of tasting (19 wines) and conversation, with the father and son team of Michel and Frederic, I can honestly say I have never enjoyed a tasting more and came away glowing and feeling I had discovered a new favourite!! The cellars are very old fashioned in the sort of way that makes you wonder how they know what is what and where it is! There were bottles of 1958 (Frederic’s birth year) on a step that had so much fur you could barely make out the bottles at all. We tasted the 2008’s from Aligote (awesome for an Aligote if atypical) to Volnay Clos du Chateau des Ducs which was a 20/20 in my book. The style has everything, structure but charm, fruit but also minerality. Simply staggering!! I’ll be buying what I can afford!
Posted by Will Hargrove at 02:46