My favourite producer trip every year will not surprise anyone at all, well anyone who knows me. It is the one where we go to see and taste with Roberto Conterno at Cantina Giacomo Conterno in Piedmont. This year I have managed to do the tasting there twice within a month (another post coming soon) which is a rare treat. Often we arrive and taste before dinner but this time we had dinner first, with Roberto and his assistant Stephanie. But before heading to the restaurant we met at Casa della Saracca in Monforte d'Alba, a spot I have got to know well now. If you are in the region and want somewhere really unique to stay or a great place for an aperitif or relaxed evening then this is a great spot. It also has something of a cult following amongst the producers of the region.
We had a bottle of Champagne. Egly-Ouriet Brut Tradition NV - I really like this and have had it since, good levels of nutty biscuity-ness but not at the expense of drive and acidity, it really is like, lazy analogy coming, "sparkling Meursault". 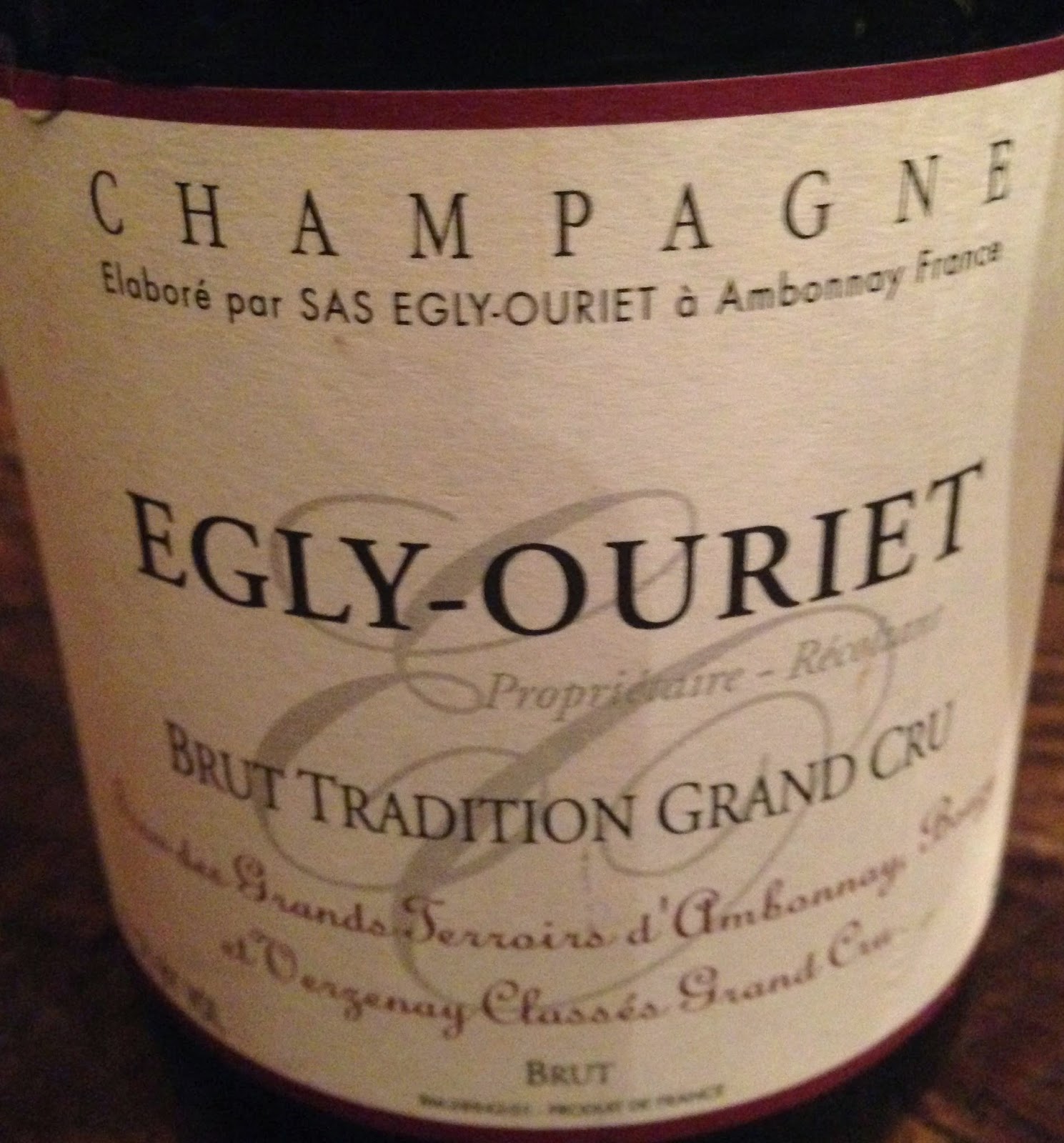 We then jumped in the car for a Dinner at La Ciau del Tornavento, in Treiso which I'd never been to before but have since been again - I feel it may be somewhere I return as often as possible. It is a great spot with the biggest and best wine cellar I have ever seen, tens of thousands of bottles with particular strength in Italy (of course), Champagne and Burgundy.

In the cellar it was time for apertivo number 2 - Bollinger RD 2002 - this was not showing all that well, a little flat of flavour and overly evolved, further re-enforces by personal taste for bottle aged champagnes rather than late releases. 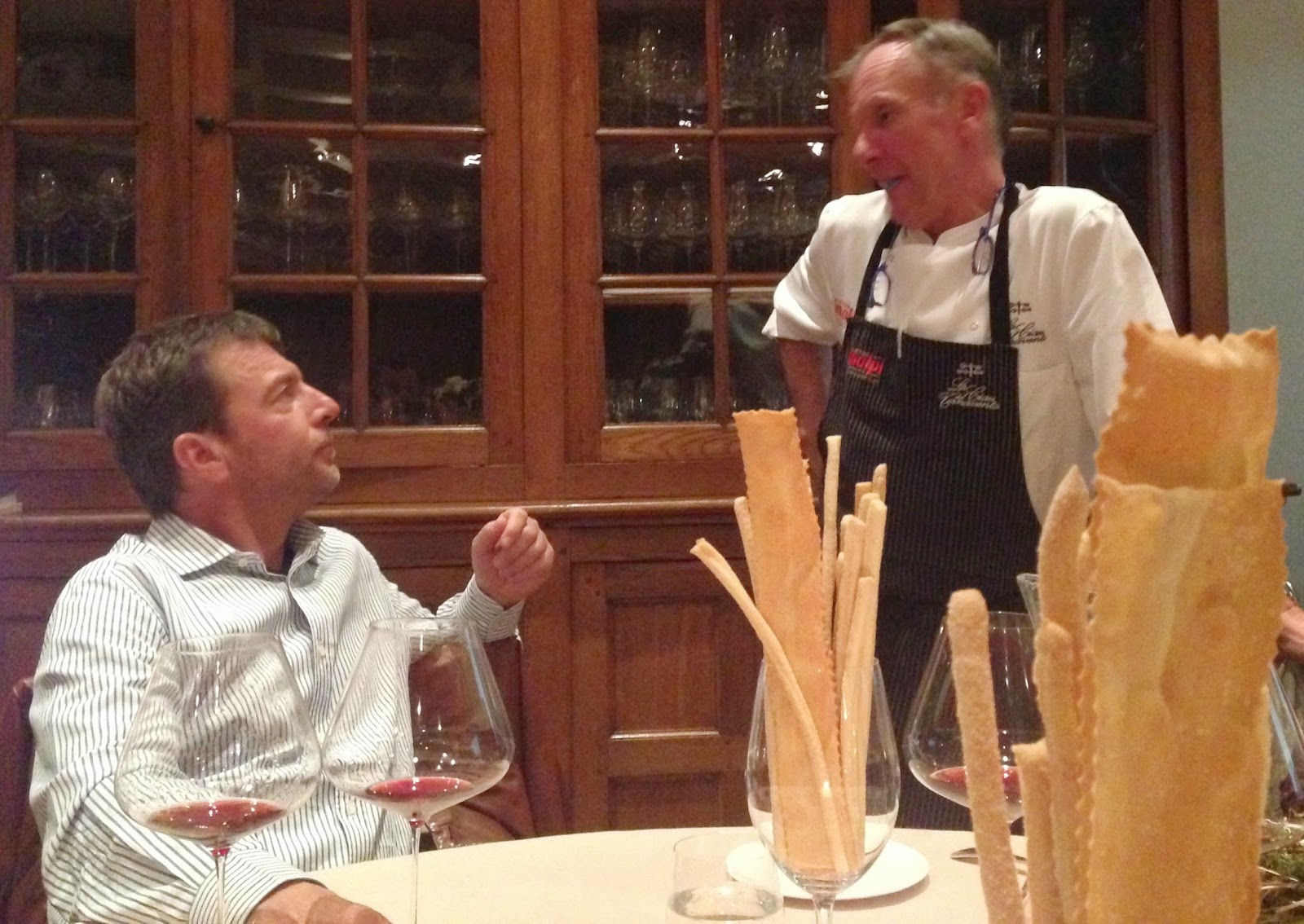 With dinner we had two reds. Barbaresco Asili Riserva 1996, Giacosa and Barolo Bricco Boschis Riserva San Giuseppe 2004, Cavallotto. The Giacosa needed lots of time in decanter as well as glass to open out but did so in time to reveal a lovely balance. Initially it had been a little reduced and also a little "high" or farmyardy. The Cavallotto was more immediately open and ready for business but in a cool, red fruited yet mineral way a really lovely wine with a long but focussed future, impressive indeed.

It was a lovely dinner in a lovely spot, brilliant to hear from Roberto about the recent purchase of the Arione vineyard and also the almost completed developments at the winery.

9.30 next morning and there we were at the winery ready to taste. Before going onto the wines I must just say that the attention to detail in every facet of the winemaking and bottling process here is incredible from the in-house treatment of the corks and printing to the new just about to arrive bottling line. And so to the wines:

Barbera Francia 2013 - 40yr old vines now and there is always more minerality and salinity here. The 2013 vintage is a cooler one more like 2010 or 2008. This was delicious if still serious, dark fruit but grit as well.

Barolo Francia 2011 - The barrell that would have been Monfortino* was added about a month ago.The wine has lovely red fruit precision but again as with the Barbera there is a saline and stones backbone, this is soft now but will grow and tighten, amazing juice. As with Burgundy just forget about whether vintage are stellar or not, find producers you like and buy the wines!

Barolo Cerretta 2011 - The differences between this and the Barolo Francia are like those between the Barberas, and possibly explains "terroir" better than any tasting I know.  This Cerretta has more obvious and slightly darker fruit but a little less tannin as well, this is just such a flattering wine right now. Exciting.

Monfortino from barrel is one of the most exciting tastings anyone can experience in my view. The fact that I get to taste the same wine on 2 or 3 occassions from barrel is just brilliant. The 2008 is quite something. The extraordinary dimension to this wine is quite possibly due to the fact that in 2008 there was a phase in September when the temperatures drpped to almost zero and this Roberto feels has added a cerrtain something by tightening and sweetening things.

Monfortino 2008 - A wine with quite incredible complexity of aroma, at the same time fresh and red fruited but also degraded and sweet in a leathery fashion, very precise and linear, this is bottled now. Exciting and so different from 2006 or 2010. May be more like 2004 in fact.

Monfortino 2010 - A wine that is a legend before bottling, the archetypal Barolo both fine and massive, both feminine in purity and masculine in bredth and power. Sublime. Extreme patience will be required once bottled but from the barrell just fabulous. A simply brilliant end to an always superb tasting.

Having done this brillaint tasting and said our good buys at Giacomo Conterno we drove off to La Morra to see a smaller and stylistically different producer - Giulia Negri - who we have just started working with. There is Barolo here as well as Barbera, Chardonnay and Pinot Nero. Giulia is ambitious, young and a lover of Burgundy as well as Piedmont.

The estate is amongst the Serradenari Cru which is the highest in the whole region. Giulia also has some rented holdings in Brunate. The top Barolo is called Tartufaia (the truffle-hunter, named after the estates enthusiastic dog) and is a blend of both Serradinari and Brunate. This works well together as the 2009 shows. I will do a fuller write up of notes in an upcoming blog but Giulia is one to watch with a real drive and desire to succeed, you'd be brave to bet against serious things happening here.