A wonderful dinner that was years in the organising by Jordi Orriols-Gil. It was a quite wonderful marathon all in all from a kick off at 7pm we finished at midnight…The notes below are a little erratic that is only because with some flights there was a bit of quiet and everyone was quite studious with others the conversation flowed and I wrote far less. As always when dealing with great wine the notes end up being comments and observations, or even character assessments, rather than descriptors. 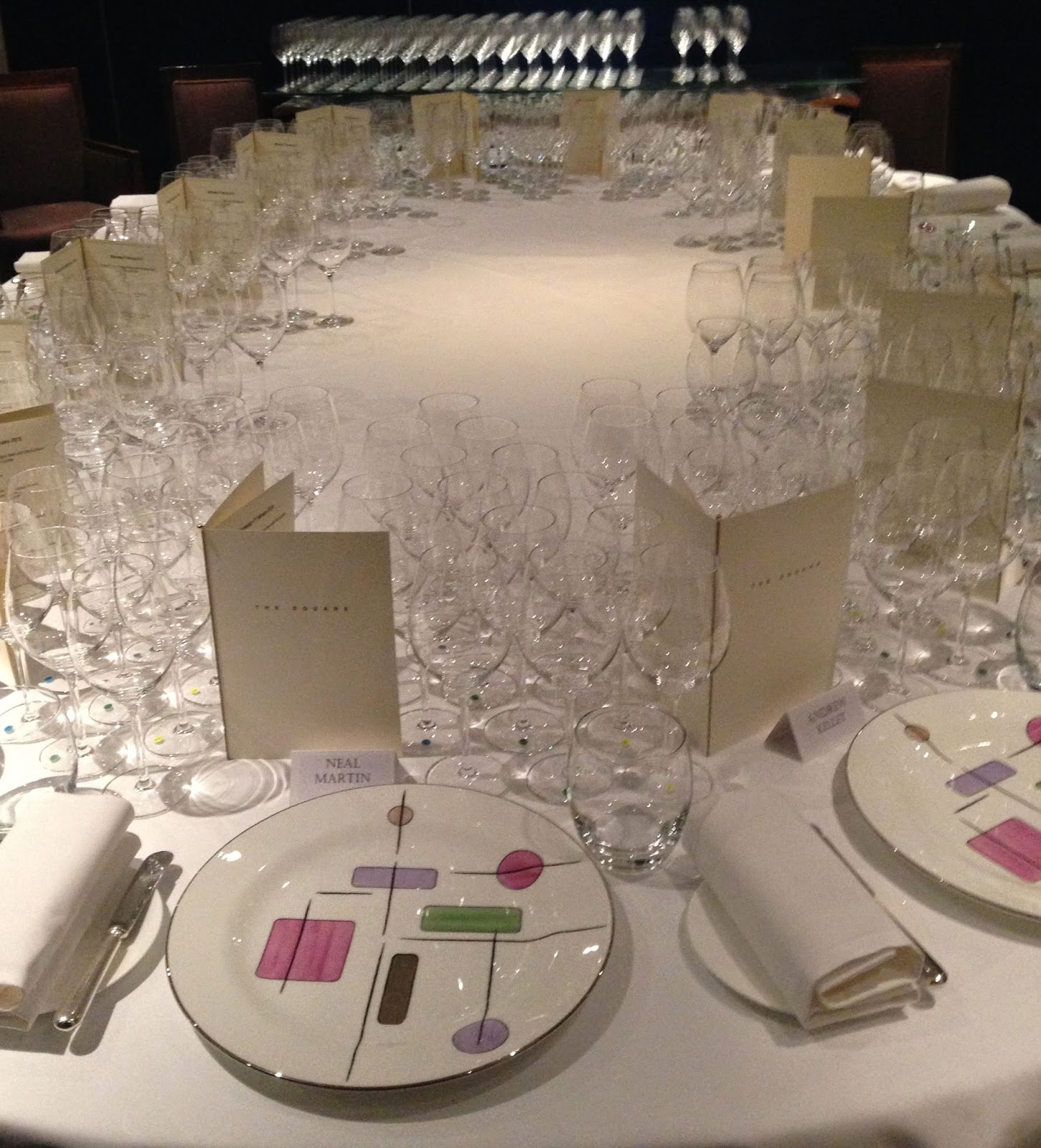 A mention must go to The Square whose service was good as ever and whose menu was really delicious (a couple of pics at the bottom). 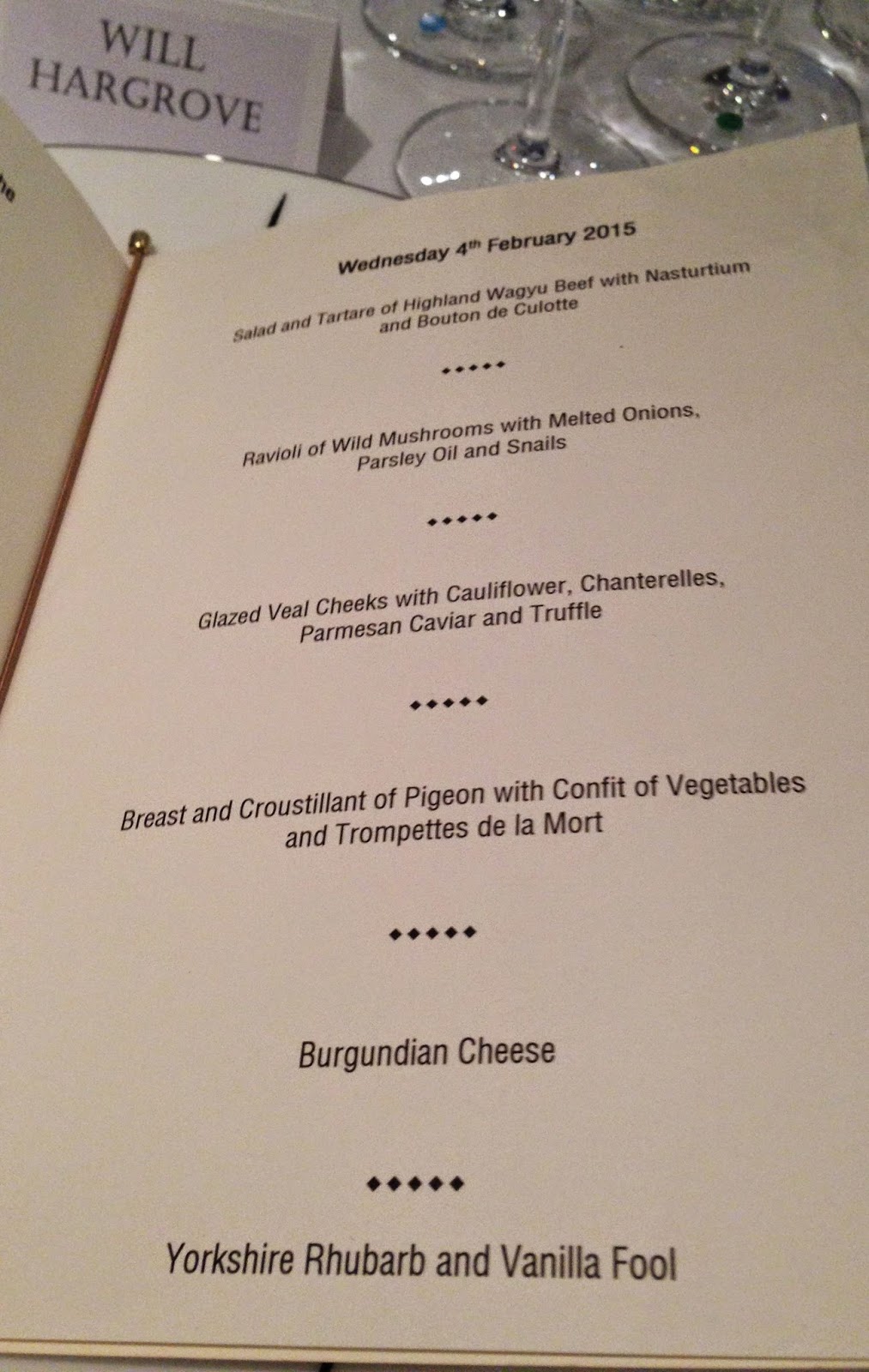 So, on with the wines: 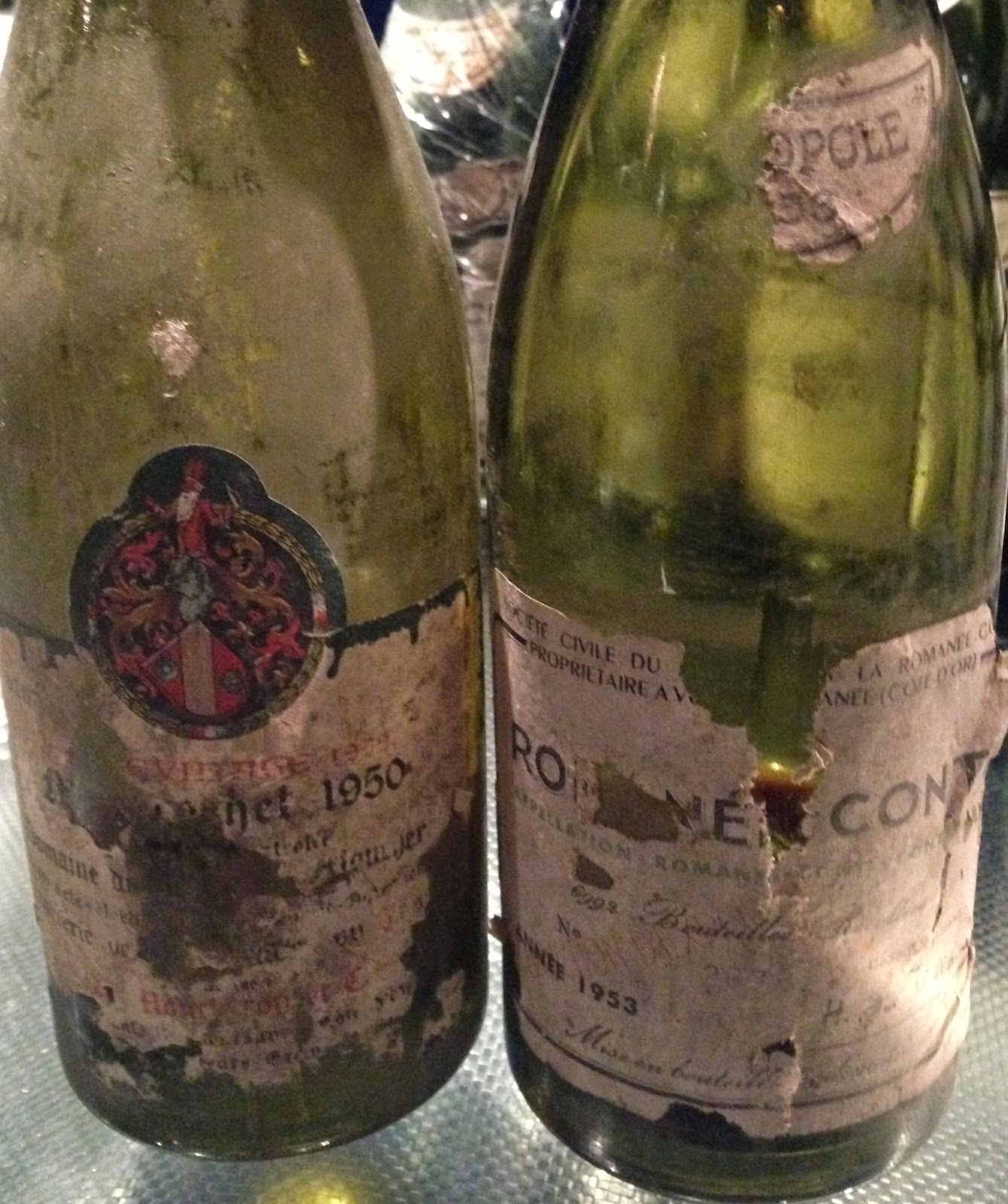 Montrachet 1950, Comte de Moucheron – The Comte de Moucheron were the owners of Chateau du Meursault and the owners of the plot of Montrachet that was later sold to the Domaine in 1966. This was alive but fully mature, as you’d expect. A dry butterscotch and orange character, tangy.
The wines were then served in flights of between three and six wines. The glasses used were mid sized, bigger and some of the delicate wines would have been too prone to oxidation as we were 14 people to each bottle. No wines were decanted just poured straight from the bottle. Other than the magnum of Bollinger everything was from bottle format.

Flight 1: A brilliant flight of young wines that really showed exactly the characters I expected of the vintages.

1999 – Such amazing vibrancy, so rich with fruit but so focussed, a shade of graphite minerality but essentially a wine of opulent fruit, some of that fruit is quite dark. Really very special, on reflection one of the wines of the night. I have had this a few times and it is a stunningly exciting wine, no doubt about that. If you own this be very excited.

2000 – A shade more bruised in fruit character, mulled fruit a little, a dash of orange rind but only a tiny bit, light and elegant, no blockbuster, gentle, good focus, became more generous, easily nice, a little grip on the end but essentially very complete if short of being profound.

2002 – A shade degraded as you would expect, very 2002 to the 1999’s purity. “Mulchy” there will be undergrowth to come soon, some mushroom but also sweetness, young but on track to be a wine that has superb secondary and tertiary class. Structure is very good, definitely there but very balanced, retains it’s sweetness. On revisiting later is tightened up and kept it’s focus.

Flight 2: Possibly the flight where I learnt the most, wonderful differences.

1980 – Interestingly Aubert noted that this was the second vintage (after the ‘79) where they did no racking, straight from barrel to bottle so as not to lose anything. This wine reminded me of the Romanee Conti 1965 we had had the previous evening. Incredibly clear, clean and pure, so persistent, like rosewater, consommé and savoury notes all at the same time. Amazing and in most peoples top three wines of the night, who would have thought…

1985 – More red colour and depth than the 1980, sweetness, life, very fine. Three of those assembled commented that it was not as perfect as another bottle they had previously drunk together but to me this was high class and really pretty decadent.
1989 – This had a strictness and correctness but certainly a lack of charm. Good weight and density as well as darker, thicker colour, more robust but also a little clumsy. The tannin ws definitely there, as was dark fruit but somehow the two did not meld as they might. I was very re-assured by Aubert’s observation that this was a wine that went into bottle “in a bad mood and has never really changed”. In isolation a good wine from a vintage that has never been as great in Burgundy as other European regions.

1990 – Superb, decadent nose, very 1990. There is an element of the 1999 about this but may be more degradation. There is a little savoury side but fundamentally this is a wine of dark but fresh fruit, succulent texture and a dash of cleansing saline at the end. Odd though this may sound but it reminds me of a Burgundian Haut-Brion 1989 in so far as it is just so hard not to like it and yet it stands out as being of the vintage as much as the site. Delicious.

1991 – If the 1990 has always been the opulent, generous, crowd pleaser then the 1991 is the purists vintage, all freshness and red fruit with acidity to focus and sort of perfect leanness. Such focus and life, nervous energy if you like. Aubert commented that it corresponds exactly to the type of wine that he likes to make. Poised and classy.

Flight 3: It is fair to say this was comfortably the most under performing flight, even those that were good had a degraded, powdery colour and texture.

1970 – It was noted that this was a very difficult vintage with botrytis almost floating in the air as in 1965 and 1967. The wine had some bruised oranges, then quite quickly mushrooms and mushroom water*, it was a little weary but I did like it, long as well.

1971 – We tried two bottles. Neal Martin, whose birth year this is, said he must have cursed the wine. The first was promising but ever so slightly corked and once you noticed this you couldn’t avoid it. The second bottle was more correct but not (cork aside) as good as the first. A shame, you could though tell in that the first showed real class and texture as well as savoury persistence.

1972 – Oranges and Verdehlo Madeira, a zesty powderiness, it was like must, pretty exhausted, so beyond mature but my note finished “bizarrely enjoyable”.

1974 – This was noted as a rainy vintage like 1967 and 1977. There was sweetness there and dry wood, a good surprise, not serious but really enjoyable.

1976 – Aubert commented that there are others who probably made better '76’s. It was very hot but picked in the rain that finally came. Someone asked about 1976 and 2003 being similar and Aubert felt that 2005 has more in common with 1976 than 2003 does. I like this wine, clean, precise and really quite dense, a great effort.

1978 – Sadly this was not as it should be. A Bual character and drinkable due to some sweetness but… 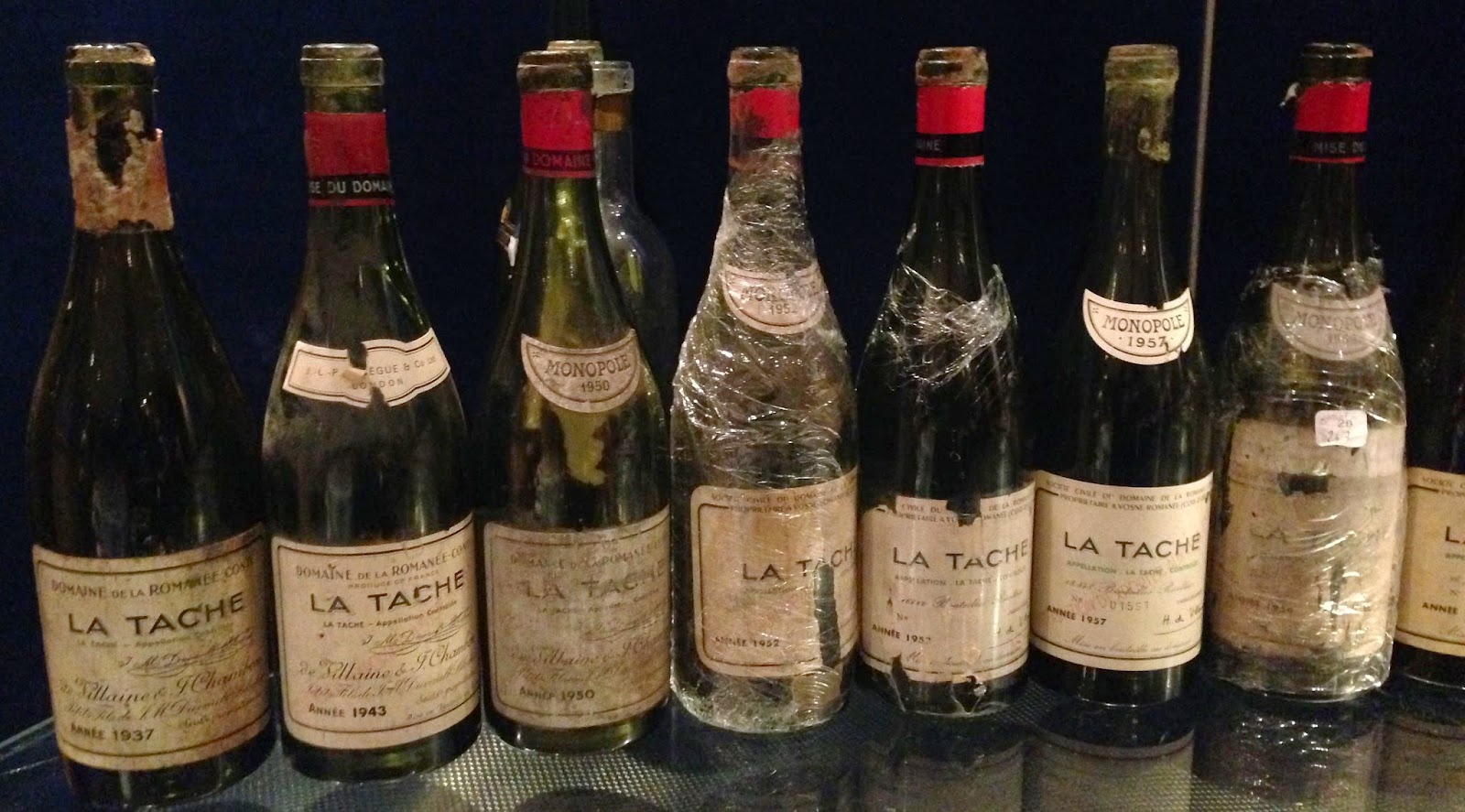 Flight 4: A lovely flight, clear candidates for the wine of even this night.
1962 – Not correct in colour or tasting

1965 – Some soy and balsamic, nice, on the savoury yet focussed side of things. Some mushroom came out and the colour did brown in the glass, elegant.

1966 – Delicious, nervous, so elegant, sweet yet savoury, some wood and nutmeg, real depth, I could see the ’99 developing this way but then I could say that for the 1964 as well and yet the two wines are quite different.

1969 – I made very few notes here sadly – I had it down as good but lacking a little fruit sweetness.

1964 – Another bottle, a little less “red” than the other, very good though, slightly more saline and savoury notes but the same focus. A magnificent bottle on any night but just shaded by the over 1964.

Flight 5: What our host would call mature wines!
1950 – Tea, some orange but lightly so, citrus, sweetness, almost some butterscotch, a little vanilla, lovely, elegant...with air some coffee notes appeared…fascinating. It was very interesting to note that this vintage was all but written off by the critics…it certainly “shouldn’t” be alive now!
1952 – Delicate, lovely, fresh, bright, a little edge to it but there is some volume, fascinating.
1953 – Sadly not in taste-able condition.
Romanee-Conti 1953 – Clean and clear, very very good, very persistent and focussed, real weightlessness but also sweetness. Light and elegant, very fine.
1958 - Sadly not in taste-able condition.
1959 – A dash of caramel, a real similarity of character to the Romanee Conti 1959 tasted a few weeks previously. There is a viscosity and intense sweetness, incredible.
Flight 6:
1937 - Sadly not in taste-able condition.
1943 – Bacon on the nose to a degree, richness but a light framework, in one place. It has an energy albeit delicate…surprisingly long.
Not that any more wine was needed but Jordi always likes to keep the line of vintages going back so we went into the 1920's with:

What an evening, a great reward for Jordi's hard work in assembling these bottles. Certainly a tasting I can't imagine will ever be repeated. I don't think anyone has ever doubted La Tache's place at the top table of vineyards in the world let lone Burgundy. Possibly the most true identifier of a great site is the ability to perform year in year out and in a series of different vintage conditions. La Tache does this from extroverts like 2002, 1990, 1959 to the refined and elegant dancers of 1980, 1991 and more…wonderful (however biased I may be)... 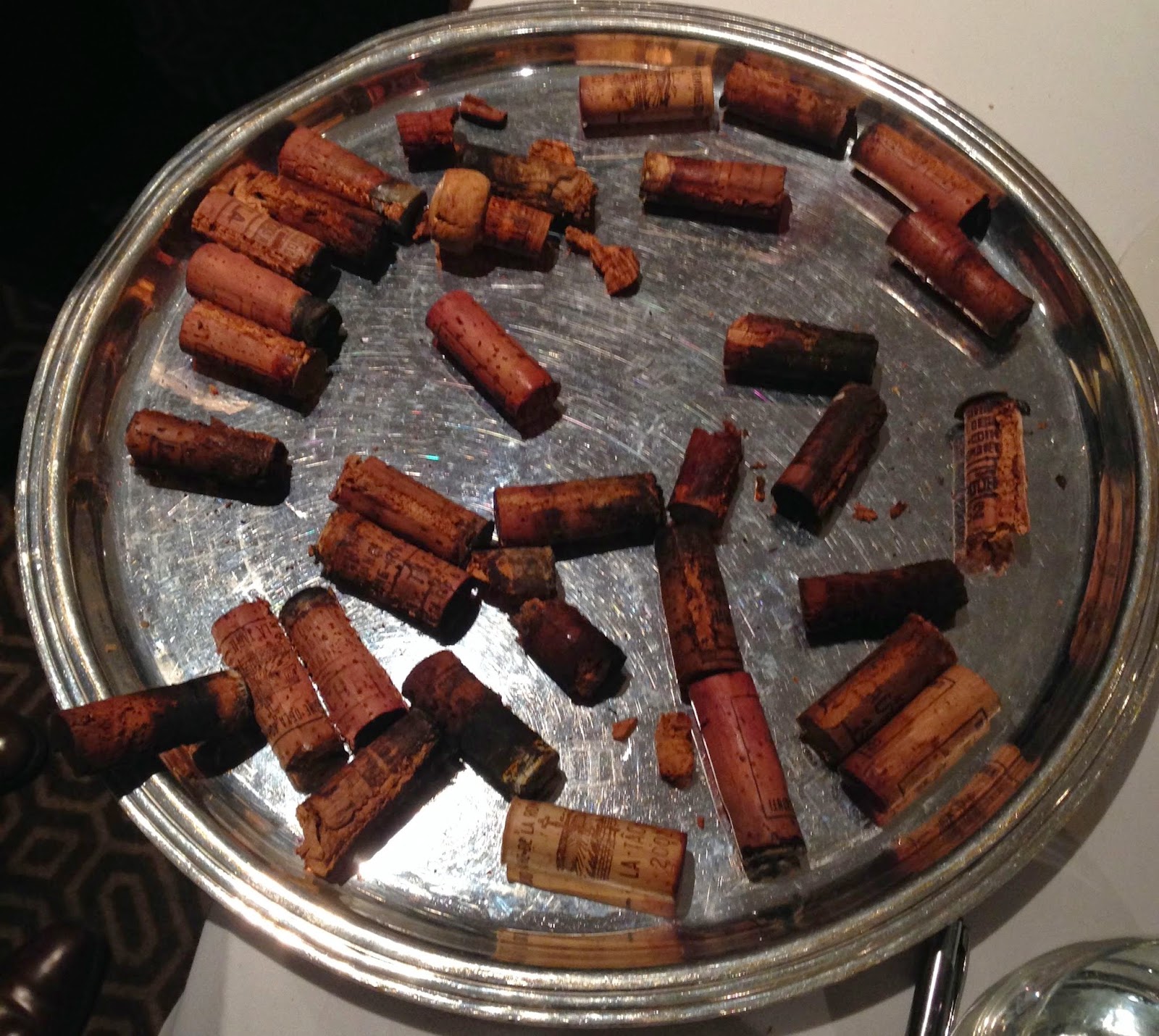 *Mushroom water - this is a note I have started to use a fair bit, it describes the smell you get when soaking dried mushrooms in hot water. This normally signals that Mrs Hargrove is making her mushroom risotto, always a good thing!
Posted by Will Hargrove at 06:38