On wednesday night last week I was delighted to host a dinner at Franco's in Jermyn Street - Roberto Conterno of Cantina Giacomo Conterno and his assistant Lauren were in town for this and another dinner (see below). It was a select bunch of hardened Barolo fans. We started with the Delamotte Blanc de Blancs 2002 which having been released for 6 months or so is just starting to flower gorgeously a real treat and a great start. 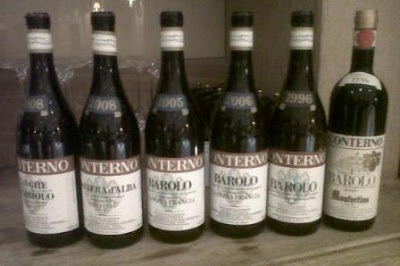 From there the 14 of us were seated and started on Veal Carpaccio, rocket, parmesan and black truffle with this we had the two wines from the new, well new to Roberto from this vintage (2008), vineyard of Cerretta - the wines were the Barbera and the Langhe Nebbiolo. First up Barbera Cerretta 2008, this was several peoples surprise wine of the night, such fruit but also a savoury edge and real substance, a seriously under-rated wine, this is on clay and shows richness...if only people took Barbera a little more seriously. The second wine was the almost unique Langhe Nebbiolo Cerretta 2008, I say almost unique as there is likely (90%) to be a Langhe Nebbiolo in 2009 too. Although the 2009 will be released next year after 3 years in barrel rather than the 2008's 2 years. Both wines could be Barolo, technically and in quality, but this being Roberto only the very best will do. The Langhe Nebbiolo Cerretta 2008 is stunning, I love it, a Volnay of a Barolo that isn't actually a Barolo if that makes sense, this is no novelty. Next up was the obligatory Mushroom risotto with a pair I have had many times and was to have both nights but I will never ever tire of them. Barolo Cascina Francia 2005 & 2006 the former has amazing accessible balance, the later is so classically correct, structured with lifted fruit, a must for Barolo lovers, I've bought a lot of 06's so also always a relief too! I will repeat something here that Roberto said and that is that 2005 is a good and consistent (across the region) year as it was pretty easy, 2006 whilst technically better is less consistent as there was great ripeness, great tannin and more excess so the balance was harder to strike...there are people out there who have produced better 2005's than 2006's.

The final two wines accompanied two courses Braised Lamb Shank with Potato Puree and then Cheese, the wines were both first timers to me Barolo Cascina Francia 1996 & Monfortino 1996. Both wines had been decanted out of the bottle and back about 2 hours before serving, the others were checked but then just poured from the bottle. This vintage has a lot of classical similarities to 2006 - taut structure, dense tannin and fruit. The Cascina Francia was stunning, young with a proper tightness wonderful balance and a way to go, no rough edges, ripe tannins, open enough to be no waste now. The Monfortino 1996 will out live me but actually came out to play quite flirtatiously, it is a profound wine and chewy in a "see you in 10yrs" sort of way, there is fruit in abundance but presently subdued, the texture tells you everything, it took may be 15 minutes in glass to sing but it showed all it's class. 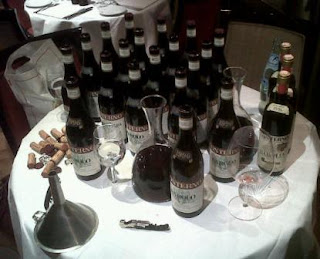 We were well looked after by Franco's...a memorable evening, a great atmosphere that lead nicely to the following day...

The next evening we were at Mossiman’s, this time 50 people in the top room, a wonderful layout and stunning wines led to superb night. First up was the Delamotte Blanc de Blancs NV, always a wonderful aperitif Champagne, elegant and almost too drinkable. Once seated we got the evening going. There were many interludes during the evening with Roberto, Alison (Buchanan) and myself speaking. Roberto was asked to talk about the philosophy of the estate…he quite quickly pointed out that the estate was about people not philosophy, a point that struck home later with a poignant toast Roberto lead to his father. The first food and wines were Barbera Cerretta 2008 & Barbera Cascina Francia 2008 with a delicious warm Oriental Duck and Vegetable Salad. It was a great pairing that showed the difference between the two sites so very well, the clay of Cerretta give more flamboyance and fruit whilst the Cascina Francia was more savoury, serious, masculine and structured. They developed wonderfully in the glasses though the evening.

From here we had the same pairing as previously Barolo Cascina Francia 2005 & 2006 with the trademark Mossiman’s Risotto ai Funghi. Roberto spoke of the differences between the vintages and about Cascina Francia as a whole.

As we had done the previous night the last two wines were served with the last two courses, people having plenty of wines to re-visit, those two courses were Roasted Highland Venison, Juniper Berry Sauce, Market vegetables & English Farmhouse Cheese, Walnut and Raisin Bread. Far more importantly the wines were Monfortino 1997 (magnums) & 2002. Here Roberto spoke passionately of the 1997 being a good year and the year his son was born and of his decision to make a 2002 Monfortino but no Cascina Francia. 2002 was seen by many as a bad vintage…there was a lot of hail and bad weather, amazingly none of which hit Cascina Francia. After a severe Green harvest and with a small crop on the vines there was then a magical three weeks up to the harvest. Roberto then spoke with his father, who was by this time unable to join him amongst the vines, about the fact he had a small but immaculate harvest. The decision was then made to make only a Monfortino, tasting the wine shows this was clearly the correct decision. The amazingly thing about the 1997 and 2002 that we finished on was how brilliant they were whilst so different. The 2002 is a richer more dense and primary fruited wine that showed a loit of class but actually closed down a little in glass, this is a great but it may be about to go to sleep. The 1997 started as archetypal maturing Nebbiolo nose and just got better and better and more and more multi-faceted and complex. A Joy that I can still all but taste.

The atmosphere though the whole evening was magical with Roberto speaking passionately but concisely, customers getting bottles signed and everyone just loving the wines…BRAVO
Posted by Will Hargrove at 04:59