So the Friday after the spectacular Rousseau at Riverside there was another wine feast planned. This time at the Medlar Restaurant in the King's Road. The group of five included two chaps - Betrand, the chief organiser, and Jordi - who have great cellars and love opening older bottles - both being expert in this area. The menu had been specifically put together and is below:

So to the wines, which were splendidly served at good temperatures by the Sommelier Clement. We started with:

Dom Perignon Oentheque 1996, having had the "normal" 1996 Dom Perignon the week before this was interesting. I tend to prefer the normal bottling but this Oenetheque is good, more richness but not in a clumsy way, good toast, a lovely start.

The two whites we started with were any thing but aperitifs being terrific to follow through the next hour or so - Meursault Perrieres 2004, Coche Dury and Meursault Narvaux 2004, D'Auvenay. The D'Auvenay had one of the most expressively explosive noses I can remember. A whiff of bold reduction then a little toffee, then a very marked and persistent note of popcorn, both popped and unpopped. That sounds like a silly note but it is so precisely what the aroma was. A bold and masculine white. The Coche was wonderfully subtle, young, more taut than the D'Auvenay (almost impossible not to be) it developed really well. It was an unfair fight when they were opened, the D'Auvenay taking control, but an hour on it was almost the reverse - a terrific pair.


Next we were having wines from possibly the other two big names in Cote d'Or whites. They were Chevalier Montrachet 1996 from Leflaive and Meursault Perrieres 1989 from Lafon. Sadly, as happens, they didn't live unto their predecessors. The Lafon was corked, it seemed fully mature but wasn't mildly corked so we moved on immediately. The Chevalier, which I have had a couple of times before, is a good wine. This bottle was a decent one if unexciting. It has a saline and salty almonds aroma, there was fruit but slightly bruised. Good length but just slightly missing a bit of "zip". 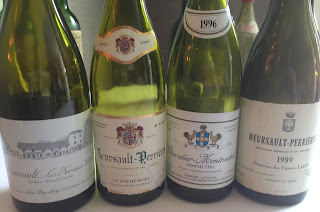 The next flight was a splendid trio:

Echezeaux 2007, DRC
Lovely elegant colour, some orange rind, spices, a dash of graphite, with time it actually got more dense. I love the purity of the gently made 2007's. Very pinot.

Bonnes Mares 1976, Clair Dau
I had not heard of Clair Dau before but I was quickly told it is what is now Bruno Clair. This was mature. Animal, good, a little soy, some green but good green. Balanced and complete, possibly missing the excitement of sweetness. There is that mature mushroom water aroma, good and interesting.

Chambertin Clos de Beze 1971, Clair Dau
This was initially served blind, it was a really exciting bottle, dwarfing the previous wine exactly because it did have the sweetness that older wines need to counter balance the complexity of age. Brown sweetness, leather and undergrowth - absolutely stunning. 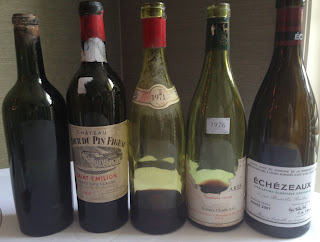 From Burgundy we were off to Bordeaux:
La Tour du Pin Figeac 1961 had an orangey hint, mulled, bruised fruit, a little milky in texture, some tin. It was a little "murky" and impure, not bad for it but not perfect.
Cheval Blanc 1952 This was served blind and had come from parcel that also included 1948 which I have had before. Black fruit and saline, great intensity, there was a spice dimension as well, extremely good wine!
So with so many of the great names of wine already having appeared we still had a few to come. 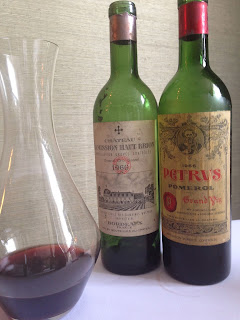 Petrus 1966 and La Mission Haut-Brion 1966 were next on the "agenda". I had not had either before. The Bordeaux 1966's that I've had have been pretty special though. The Petrus was superb, so Petrus-like in character, extrovert and high-toned, succulent. There is something unique about Petrus, especially about it's texture and showiness. The La Mission was initially a little dusty and a shade metallic by comparison, but it got better, sweater and cleaner over time, there was a little smokiness. 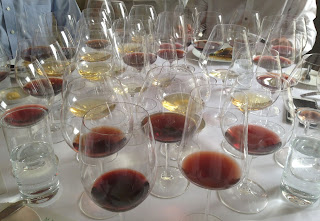 Two last bottles awaited us and both the enjoyment I got from them and the styles could not have been more different. Masuizumi 2008 Sake was, I am afraid, just not for me. It was served blind and I had no idea what it was. It was a little like hazelnut and white chocolate but with no sweetness at all, odd, I clearly need educating. Quinta do Noval Nacional 1967 was simply brilliant. I have had "Nacional" twice before, once it was also the 1967 and once the 1983. Both times I have been incredibly impressed. This tastes so young but not in a one dimensional fashion, it has developed but just at a snails pace. Dates and sweet spiced fruit, power but so graceful, I would put Nacional up there as a wine that any wine-lover has to experience. 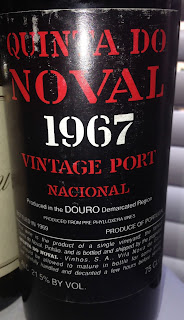 It has been a very special lunch, lots of brilliant conversation and so many good bottles, very well pulled together from both a food and wine standpoint. Bravo and thank you!

Some pics for the Foodies!
Posted by Will Hargrove at 09:06