Faiveley at The Square…

When Bazdad and Chaz ask you if you are free for a lunch at the Square you do what you have to do, move a few things around, to be there. I have been lucky enough to go racing at Goodwood with them and the lovely Dot for the last few years, it is always a highlight of the summer. We were a four with Thomas Parker joining. The event was the annual Faiveley lunch at The Square. I was intrigued as I do not know the wines and can only find that I have had two of them, as recorded on this blog. There were many familiar faces on other tables all of which made for a lovely atmosphere. 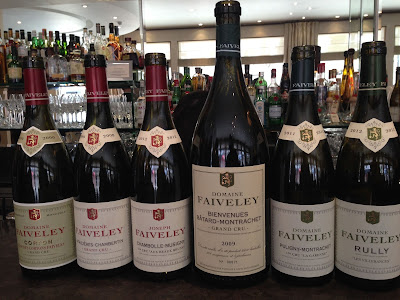 You never have to worry about the quality of the food at The Square, in all the many times I have been it has always been spot on. Some pictures are at the bottom of this post, the menu was:

So to the wines:

We started with Rully Les Villeranges 2013 as an aperitif, this was good, clean, fresh and with good green fruits as well as a nice lack of oak. Just what you want from Rully. As the food arrived we moved up a notch to Puligny-Montrachet 1er Cru La Garenne 2011. This was really impressive and for me the pick of the whites. A shade reduced - a good thing in my book - this had sweet white fruits and nice focus. Some apples but nicely ripe ones at that, a little decadence too, some smoke from the reduction. A good 2011 which promises to be a rewarding earlier drinking vintage. The final white was from magnum and was Bienvenues-Batard-Montrachet Grand Cru 2009. This was rich decadent, quite hedonistic, a little bit of oily reduction, some toffee and a little, slightly over ripe, apple. This is ready to go now, it'll keep but I see no real reason to.

We were then solidly into red country with Chambolle-Musigny 1er Cru Les Beaux Bruns 2012. A nicely rich Pinot nose, then a little crushed graphite, a smell I associate more with northern Rhone, Cornas?, than Burgundy, but not in a bad way. The palate had a little dryness but again richness, this felt more like the constituent parts than a complete wine and when it comes together there will be more charm and balance, at the moment it is slightly more Gevrey grit than Chambolle charm. The Latricieres-Chambertin Grand Cru 2008 that followed is from one of the 10 Grand Crus that they own. In brief it was really delightful, there was depth but also an almost flirty quality to it. All persistence and drive but with slightly degraded sweetness, absolutely perfect to drink now but the balance and sweetness will mean a bright future also. Really enjoyable.

Erwan Faiveley who spoke so well about the wines then introduced the last wine as being very much in his "Father's style". He was very respectful of his family but he clearly has a different idea of how the wines can be - drive, balance and elegance seem to be more his watchwords. The wine we finished with was - Corton 'Clos des Cortons Faiveley' 2000 - the nose reminded me of cheese rind or cheese wash, there was a very slight greenness which I wonder may have come from stems. This was robust and full and partnered the Epoisses very well.

For me it had been a really good look at the wines in splendid company. Bazdad, Chaz, Erwan - thank you!