This was a very memorable dinner and tasting. It was several months of work to get it organised. The drive to do it came from Anthonio Galloni and his team at Vinous with special mention to James Forsyth. The magnums all came from one cellar. Roberto (Conterno) had never himself done this tasting in magnum. 26 people sat down, I tasted separately in amongst the service and afterwards. It was a unique opportunity. The reason for the choice of vintages is that these were the ones where magnums were made. There were other Monfortinos made between 1970 and 1982 but just none in magnum. 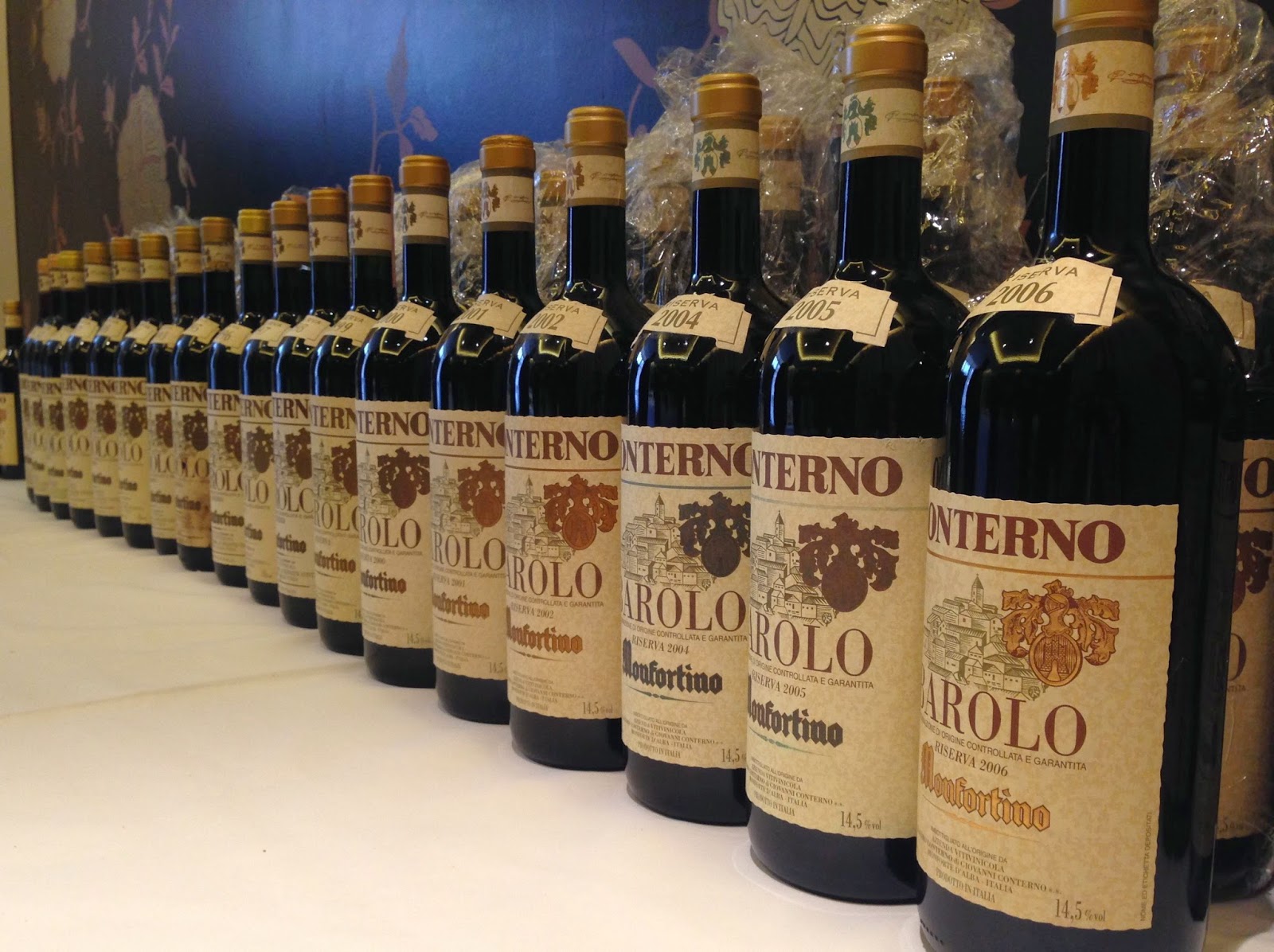 The wines, after an aperitif of Salon 2002, were all served with food in flights by style…a nice touch as the old to young or young to old is never the best way…The menu was specially done for the dinner as you would expect. My scoring in places is a little mean but the important thing I feel is to show the differences that I felt between these individual magnums.

If Monfortino is new to you see other articles here...

1988
Quite brooding, a little closed, very good deep fruit, some beef stock. Does have that slightly dry 1988 thing about it (see it in Bordeaux and Burgundy if not Champagne). Quite a hard masculine vintage slightly lacking in charm, there is though an almost floral edge hiding. 17pts

1993
Lovely, a really lifted, aromatic wine with a good sweet tea side and a pure oxidation. Very clean and pure, very complete and quite feminine, one of the biggest pleasant surprises. Lovely! 18.5pts

1995
Very classical Barolo, warmth and tar but very refined. Roses balance the tar. The youth shows with a good bit of acidity on the palate, there is an openness, this is quite extrovert, very good. 18pts

1990
A little bit of strawberry, a looser wine, again extrovert but also hard to define. Has quite a serious dose of dryness which does detract a little. It does have a little warmth. I just don’t think this was a good magnum. 17(?)pts

1997
A little chlorine, then new leather and tar, has a degraded opulence, quite an easy wine, hedonistic and approachable. Darker fruit and tea-like tannin. Ready to roll now. I wonder if a vintage like 1997 would now be made by Roberto as a Monfortino. 17.5pts

1998
With pressure of the service etc I skipped the 1998 because I knew I would be having it the following day from magnum at the C&B dinner at Zucca (LINK). I will include my note here. It is quite developed and there is a marked acidity to the wine that sits slightly over it. I like it and it is decent but there is a lack of balance. 16.5(?)pts

2000
Quite rounded and opulent, open also. The fruit is both dark and primary, amazingly so for a wine that is 14…not really out of the traps yet. Needs a lot of time. The only vintage that I can draw parallels with in terms of fruit profile is 2000 which is odd because they are very different vintages. 17.5-18pts

1987
In the same bracket as the 1993 as a great surprise. I have had it from bottle before (LINK) and liked it then but from magnum it is another step up. There is an easy structure and a lovely saline edge. It is in a tertiary phase with the bruised sweetness you need. 18pts

1996
As you might expect this is masculine and definite in as much as it is uncompromising. There is some dryness. The score may be conservative but that all depends on the fruit continuing past the structure. 17.25pts

2002
In 2002 there was no Cascina Francia only Monfortino from the vineyard, a first. There was though a savage amount of selection in the vineyard, be it green harvest or later on in several sweeps through the vines. This wine is so primary but at the same time very aromatic with herbs to the fore. Very fruit focussed with real depth. 18pts

2005
Bold fruit on the nose then quite taut on the plate, all in check, a keeper. An “insider’s vintage. I really like the balance here and the potential is obvious. A tightly wound spring right now. Very proper and likely to outperform the score. 17.75-18.25pts

1970
Oh how I would love to know where the fruit for this came from as it is the only pre Cascina Francia Monfortino on show. There is a really decadent yet fresh texture to this. Lots of layers as well. It is refined but at the same time has a bit of muscle. The colour is a more saturated deep almost black. There is a tertiary edge as well. A really special wine. 19.5pts

1982
Very gentle developed, savoury notes with a little red fruit freshness. Quite feminine and elegant. Very refreshing and lovely now, slightly in the shadow of the 1970 but a lovely wine and one for drinking now along with the 1987 and 1993. 18.25pts

1985
Saline and newish leather, very good persistent nose with poise, power, some iodine. Very classical and one to start drinking but in no rush, a little like the 1982 with more backbone.
18.75pts

1999
Airy, savoury lift also, this is serious. Taut and very foursquare, muscular shoulders but not clumsily so, quite stern and uncompromising. Very great potential, like m any 1999’s patience is the thing. 18pts

2001
Perfumed, very red fruit but with a tongue-attacking tannic structure. A wine I am sure will be elegant in time but with backbone and grit now. May be a 1985 of the future but leave this for quite sometime now. 18pts 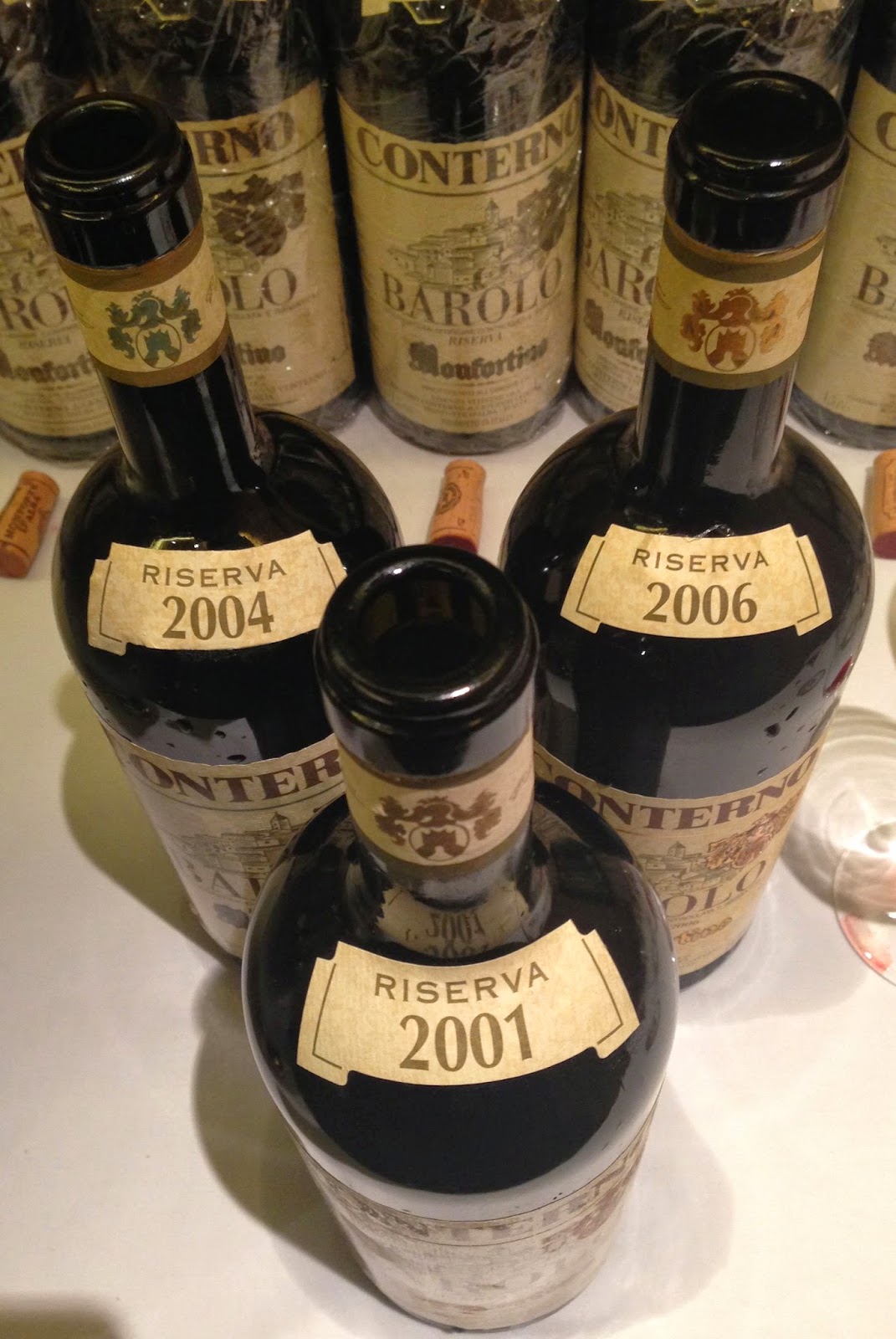 Perfection for me, having had this several times from barrel and then bottle and now magnum I think this is a spectacular wine with such charm now but a definite if perfectly balanced structure behind. Like many great wines I see no obvious reason why this will shut down (as the 1999, 2001 & 2006 have/will). It cries at you to “drink me”. Profound. 19.75-20pts

2006
I love the uncompromisingly “Barolo” nature of this wine, so very classical, it has everything that you could want from a wine that will be at it’s very best in the secondary and tertiary stages of its life. There is tar and treacle as well as some wonderfully textured tannins. 19pts

And that as they say is that…as if prove were ever needed of how can Monfortino is and that this fact is not going to be changing!