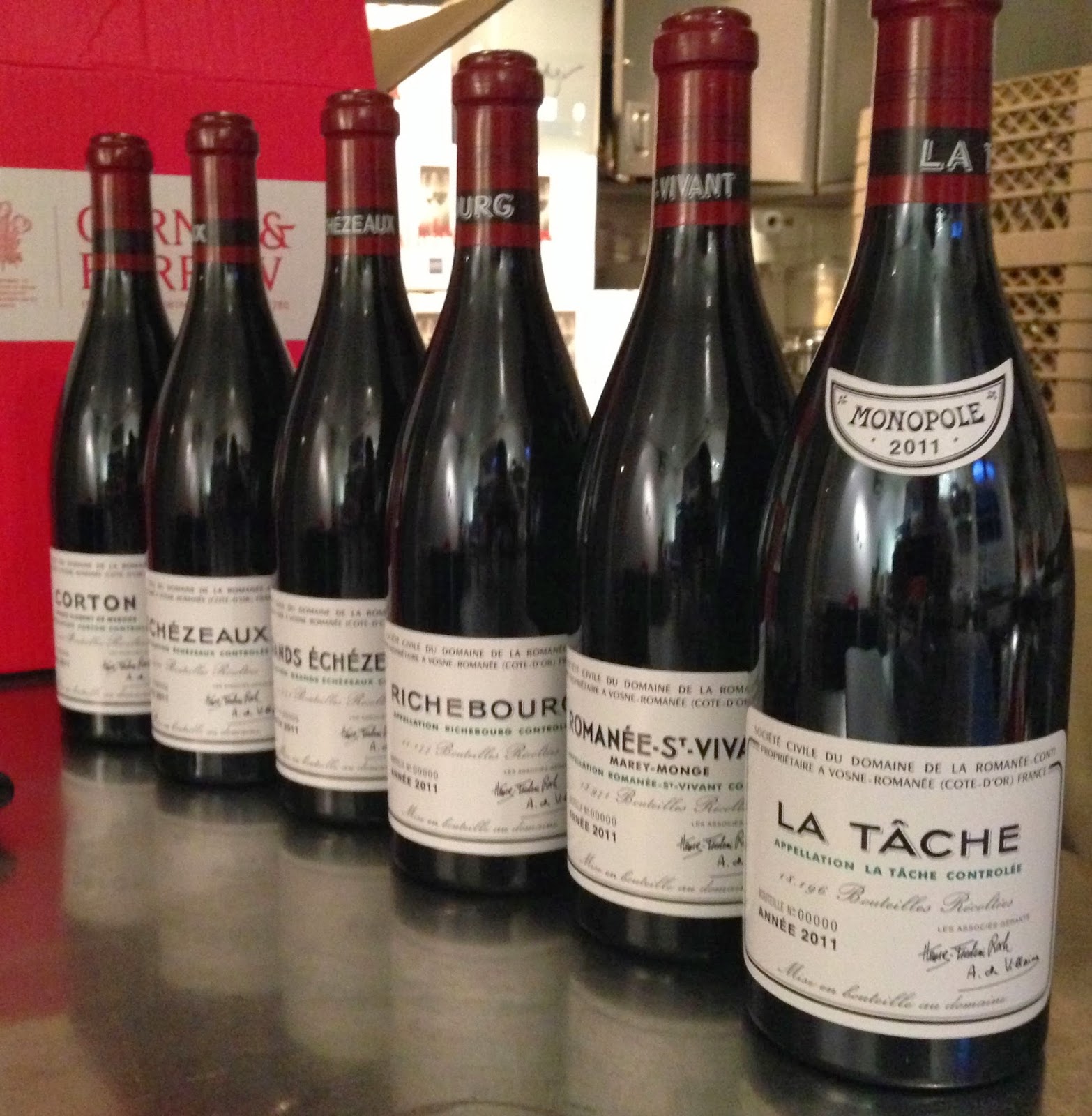 Friday the 7th February was the day for one of the annual treats - the Press Domaine de la Romanee Conti Tasting. I will write my views on the wines but as I work for the agent I am (very) biased. Mind you what I think is of little consequence to their success but I feel it is important, if only for myself, to try and note my impressions.


To following on from the 2009's and 2010's is quite a task. It is very fair to say that there isn't the sexiness of the 2009's or the out and out class, poise and structured precision of the 2010's but these wine stood up very well. Very Pinot and with good balance and grace. I would imagine they will hit their plateau before either '08, '09 or '10.

A small note for accuracy I tasted at between 7.45-8.10 am as I was also checking the bottles for the tasting. We always serve them very cool, as they would be served at the Domaine. Given the name of this blog it is important to note that there is a 1er Cru Cuvee Duvault Blochet in 2011 but that it will only be sold domestically in France (the same happened with the 2004). A shame if a slightly understandable one…may be one day I can organise a tasting of all the DB's.

There simply wasn't the time for long notes, so actually they are more comments:

Corton Grand Cru - Comfortably the most Corton of the three that have been produced. A gritty yet somehow classy structure. A darker fruit character. Very poised and impressive - 17.5

Echezeaux Grand Cru - Impressive this year, sometimes I feel it gets a little over shadowed but I really liked it here. Pure primary red fruits after the Corton's darker ones. A little spice in the mix also, both open and ready as well as potential serious, interesting to follow - 17.5
Grands Echezeaux Grand Cru - I said last year that after 14 years of tasting this wine on release I was finally starting to understand it, this continued in 2011. It was more masculine than Echezeaux, a little more obviously serious also, there was a fruit character that showed more richness and darkness than Echezeaux, again quite a sleeper (like '10), one to watch - 17.5-18 (this may prove conservative)
Richebourg Grand Cru - Darker fruit, as always more brooding and bigger with definite grip, a wine with a very wide drinking window. Very rich and also a little drier. I always find that I feel guilty for not being more positive with Richebourg - 17.5-18.5

Romanee-St-Vivant Grand Cru - Overt and really quite expressive, somehow looser in structure, also more sweetness. Feminine and pretty as ever but the depth continues to increase each year. There is no need to argue about it but people do tend to be in the Richebourg camp or the Romanee-St-Vivant camp and I am definitely the later - lovely, lovely wine that it would never be a shame to drink. 18-18.5

La Tache Grand Cru - Quite extravagant, lots to "see", amazing depth especially on the palate. Rich but not heavy, lasting spice. Managing to do the high notes of RSV but with the underlying depth of Richebourg, impressive wine - 18.5-19

Romanee Conti Grand Cru - It may sound silly but it is a "feeling" and a texture you get with Romanee Conti as much as a taste or aroma. It almost says "I'm all here but I'll come out when I want to". Exquisite balance and poise and plenty of structure but not an obvious type of structure - 19

With Lunch afterwards a it has become a tradition (long may it last!) to taste the Montrachet which this year was painted as more of a "Watercolour" to the "Oils" of 2010. There is often a hedonistic edge of Botrytis about the Montrachet and there was a little of that but the impression you are left with is more of balance and a real understanding that you mustn't try too hard in 2011. 18-18.5

Only another year to wait then…. 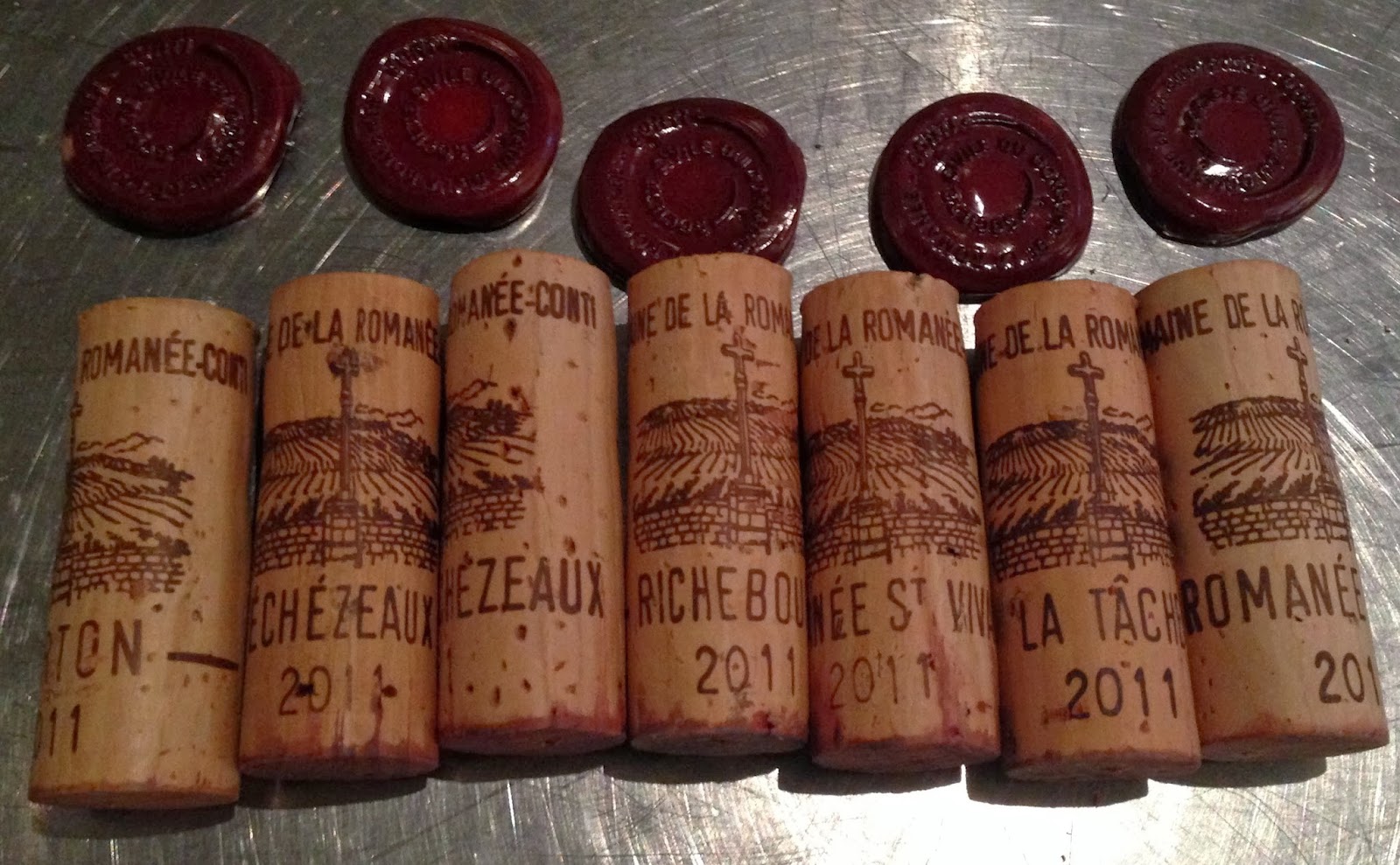