In a "follow-on" from a similar tasting of 2008 White Burgundies (see here) a slightly different collection of ten current and past members of the trade and a few collectors joined together to taste 25 white Burgundies from the 2010 vintage. The first half of the wines were tasted at our hosts house and then the remainder at the really great Trinity Restaurant (another diner I have had at Trinity can be read about here). All wines were just poured from bottle and tasted as they are. The one exception is the Chablis which had been double decanted. The wines were tasted in 3's or 4's and within their communes. There are lots of vintage reports about the 2010's it is viewed as a very good to excellent vintage for red and whites.


Flight 1:
Bourgogne Aligote, Coche Dury - If you love white Burgundy and haven't had wines from Coche Dury then you really are missing out. This is the first time I have had his Aligote, in short the nose is pure Coche which means "struck match" and mineral intensity as well as very refined oak. The palate and finish was pure Aligote...green, gooseberries and tart, nice. 16/20.

Flight 2:
Puligny Montrachet 1er Cru Combettes, Sauzet - A kind contribution from an absent friend. was quite closed initially but there was density here, a little of that late-harvest richness then a more savoury mid-palate, a little oak too but not too much, quite easy and not far off ready to drink. 16.5-17/20
Puligny Montrachet 1er Cru Folatieres, Francois Carillon - corked - a real shame as I have had this a few times and enjoyed it.
Puligny Montrachet 1er Caillerets, de Montille - Clean and possibly an little neutral to start but then does open out a little, some lemon shortbread. Actually in good balance, I liked this, impressive. 17/20
Puligny Montrachet 1er Cru Clavoillon, Domaine Leflaive - Generally the least prized of the Domaines 1er Crus. This stole the show in the Puligny round (by 8 votes to 2) was was both taut and big at the same time, plenty of fruit under a currently savoury structure, some really good lemon freshness. 18/20 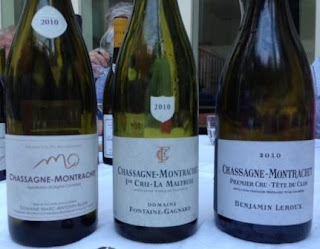 Chassagne Montrachet, Marc Antonin-Blain - Not a terribly clean example, green fruit then a goey more evolved palate and texture, not scored.
Chassagne Montrachet Tete du Clos, Benjamin Leroux - The "winner" of the Chassagne selection. Easily worthy of 1er Cru and a good one. A big wine with savoury richness and a very well integrated and quite large wood component. I would probably have been in Meursault if it had been blind, very good 18/20
Chassagne Montrachet 1er Cru Caillerets, Jean Noel Gagnard - Almost a slight spritz here I thought, a little spice and then pears and peaches, a dry and almost tannic finish, just a little awkward. 15/20 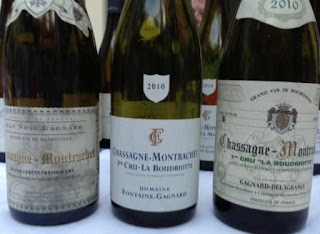 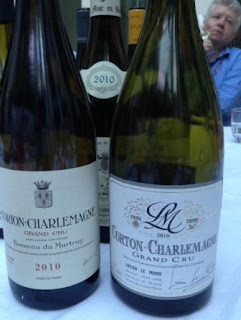 Corton Charlemagne, Bonneau du Martray - This got a very mixed review, I really liked it in my biased way and felt it showed well, I've never seen Bonneau criticised for being "too big" but it was here. I felt the opposite, all in check and good. 17/20
Corton Charlemagne, Lemoine - Richer and more oaked, a little too much for me (as a small aside the bottle had the biggest punt I have ever seen), spiced with good acidity which it needed, a "volume turned up wine" not necesarrily very Corton Charlemagne like. 16.5/20

Flight 4a:
Chablis Grand Cru Preuses, Dauvissat - As mentioned above this had been opened at 5pm and double decanted. It was very pure, very chablis and faultless but therein there lies "the slight" the problem, there just wasn't the excitement you might want, this is not to be overly critical and it was still very good. 17.5/20 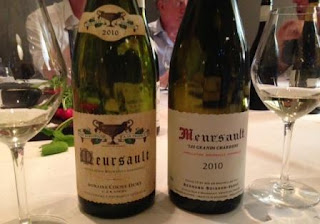 Meursault, Coche Dury - This lacked the Coche nose that was expected and actually was possibly not the best bottle of this, not corked though, it was just a bit loose on the nose and on re-visiting did start to show bruised apples etc 16/20 but tempting not to score it as I imagine the true reflection is much higher.
Meursault Grands Charrons, Boisson Vadot - One of the most talked about producers at the moment and from the 4-5 wines I have had, justifiably so. This was a very Coche like nose a dash of reduction but mostly a struck match and quality smoked oak. Good fruit under it to, not massively subtle but very much a drinkers wine. 17.5/20 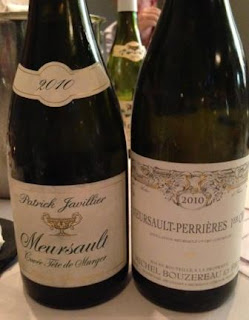 Meursault Chevaliers, Boisson Vadot - Not the rich opulent nose of the Grands Charrons but I would say certainly a step up in poise, fruit weight and refinement very impressive and one of the wines that was multi-dimensional. 18/20 Meursault Tete de Murgers, Javillier - This got slightly split reviews it certainly had more opulence, but not oak, more exotic fruit flavours and more expressive almost new world-ish. I liked it's different approach. 17/20
Meursault 1er Cru Perrieres, Bouzereau - This was decent but had a slightly distracting bed of acidity that was a little hard to see passed. It was a greener type of fruit too, still ripe but with a zing. 16/20 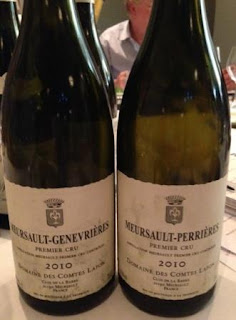 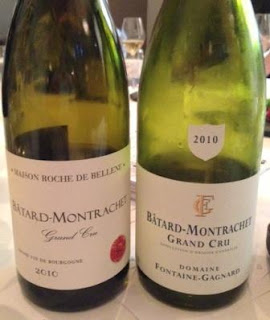 Batard Montrachet, Fontaine Gagnard - Grapefruit was the first thing that sprung to mind here, a little hollow also but that all sounds too negative, it was decent but didn't really have the masculine depth of Batard for me. 16.5/20
Batard Montrachet, Roche de Bellene - More texture and depth that the first on the palate but still quite closed. Good but not really Grand Cru quality for me. 16.5-17/20
Batard Montrachet, Leflaive - Very good as you would expect but a little like the Fontaine Batard it was almost too refined, may be these 10's just need time to add some weight. Also a little less oaked than I might expect from Leflaive Batard. There was definite class though. 17.5-18/20
Batard Montrachet, Gagnard Delagrange - This was the most "old-skool" of the Batards and possibly all the wines. More saline on the nose, almost a little tannin too, a little dry but with grapefruit (but not tart). Not at all over the top, would be an interesting wine to follow. 17-17.5/20 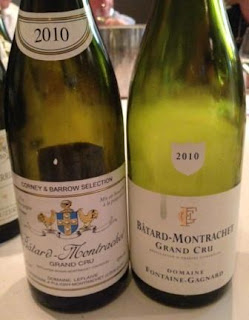 Conclusion on 2010 Whites:
I was left a little subdued and slightly confused. The Lafon Perrieres, the Leflaive Cavoillon and the Boisson Vadot's (for contrasting styles) gave some excitement but generally I expected a little more focus, zest and excitement. A good vintage? Yes and to my mind better than the 2008's BUT I think the main lesson for me was that in White Burgundy generalising about a vintage is next to pointless. From producer to producer the styles are different, the use of oak and the time of picking so crucial that it is more a house style one needs to find than a vintage.

There were a couple of reds shown too. Firstly (open) was Dry River Pinot 1996 - was really good very full fruited, both red and black fruit there. It had a nice aged quality and is great now. Served blind was Romanee St Vivant 1990, Louis Latour, wishing to get the embarrassment out the way early I was actually moving towards older northern Rhone, the only doubt I had was the depth of the wine in colour and on the palate. Some went for southern rhone other Burgundy but it was a novelty rather than profound wine, fun though.

And that was that, a fun evening, generously organised and hosted with great food and a lot of chat...what vintage next time...?