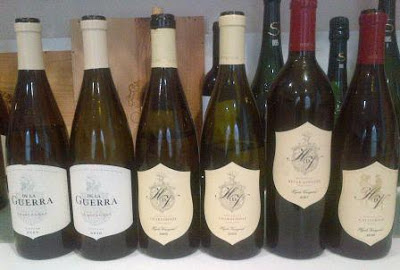 In the same room in which Aubert de Villaine was awarded “Decanter Man of the year” a couple of years ago we had a great dinner to showcase the wines of Hyde de Villaine. The beginning of this venture came in 2000 when the de Villaine family from Burgundy and the Hyde family of Carneros, California, decided to work together on a family run project in Carneros. Larry Hyde, Hyde Vineyard’s manager, is cousin to Aubert de Villaine’s wife Pamela. Aubert is very well-known in the world of wine as Director of Domaine de la Romanée-Conti and co-owner of Domaine A&P de Villaine in Bouzeron in Burgundy’s Côte Chalonnaise. So this combination of very varied skills and experience, has a lot of practicality, logic and most importantly family inspired drive about it. In fact with the exception Stéphane Vivier, the winemaker from Burgundy, the entire organisation is family.
The evening started with a pre-dinner drink of De la Guerra Chardonnay 2009 & 2010 in the drawing room. The De la Guerra is the young vines of the Chardonnay, the style is refined but forward aimed at being accessible early. The 2009 vintage was a cooler one and the 2010 more rich and typical of California. Both drink very well now.

We then went downstairs for dinner and after an introduction from Adam (Brett-Smith) it was time for Aubert to give a little historical insight into the property and for Charles "AJ" Fairbanks to introduce the next pair of wines. But first Charles said that he felt the project was about making "Californian wines with a Burgundian philosophy". The first pair of dinner wines were Hyde Chardonnay 2008 & 2009. Both come from approximately 30year old plots planted from 1979 onwards and interestingly are planted the "wrong way round" i.e north south when the normality of the time was east-west. So the two wines; the 2008 was from a warmer/more normal vintage, it showed lemon shortbread fruit and a savoury yeasty edge to it, rich but not heavy. The 2009 was cooler as a vintage and this shows. It was a real star, a little closed initially on the nose it opened out and shone brightly. Very much a burgundian style, all about the texture and elegant depth, delicious. That pair was matched with braised winter vegetables with roasted chestnut and buttermilk dressing which worked well. 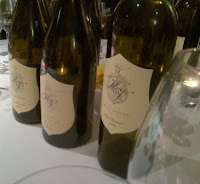 With the main course of Guinea Fowl filled with trompette mushrooms and spinach we had the next pair, namely of Belle Cousine 2007 and 2008. Belle Cousine is named after Pamela de Villaine for reasons that might be obvious from the above. The blend is generally Merlot predominant with the remainder being Cabernet Sauvignon, the specifics of these two are 60%/40% Merlot/Cab for the 2007 and vice versa for the 2008. Charles spoke of the fact that they always look to pick a little earlier than their neighbours as they view the acidity as being very important and also the freshness. This 2007 was lovely, black fruited and balanced, a little tar and an easy structure with good complexity, it will develop well and has elegance as well as full fruit. The 2008 was clearly a "warmer-climate" wine, more forward, rich and opulent. More lush and a little more unctuous too. I asked Charles if there was a little more oak, he said not but that the one year extra of age on the 2007 had allowed the oak to totally integrate. It was a fascinating pairing and the 2007 in particular is a wine I feel the need to own, a perfect "change of pace" wine.
With cheese the Californio Syrah was next, 2006 and 2008 were the vintages. This is the smallest production wine they make and in fact was never planned from the outset but the Syrah they produced was very pleasing so why not? The plot is 15-20 years old. The 2006 and 2008 vintage are similar stylistically in terms of climatic conditions. In introducing the Syrahs Aubert coined a new tasting term, to me anyway, in describing the African market spices he finds in these wines as "souk". There is a combination of production methods here with 2006 and 2008 being made from a combination of both open and closed vat batches. The wines contrasted each other well, the 2006 had a bit of the animal about it with a slight funky stink (in a good way) as only Syrah really can. The 2008 being a purer fruit expression at this stage. Both had an "intensity and an energy" as Aubert put it.
The atmosphere of the evening was great, lively and lots of debate and interest. If I had to take one white and one red away to drink I would go for HdV Chardonnay 2009 and Belle Cousine 2007 for their excellent balance and simple enjoyments. I think it is very fair to say this tiny estate is only just starting to reach where it will go and as a result remains a little under the radar...that in itself is very exciting!