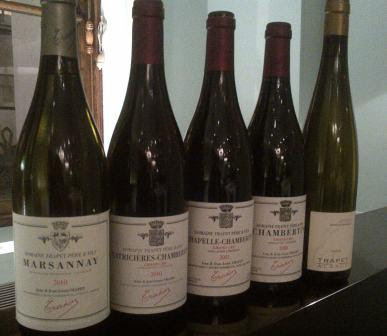 1776, the new restaurant at the back of well-known city spot, 1 Lombard Street, played host to a launch of C&B’s newest exclusivity in Burgundy, Domaine Trapet. I say new but we have worked with the domaine for decades it is just that previously we shared the representation. The evening started with Delamotte Brut NV from magnum, one of my preferred ways of starting any evening! With both Jean-Louis and Andrée Trapet joining us for the evening we had 5 wonderful wines ahead of us. We started the meal with Marsannay Blanc 2010 accompanied by Black Truffle Risotto and Parmesan Crisp. Marsannay is a small commune, 220 hectares, but not one to be dismissed lightly, there is real quality here. This wine was first made in 1993 from a 50 acres plot. The style is taut and energetic, the 2010 was tasting and drinking very youthful but there is flesh to be added to the bones. A good bracing start. 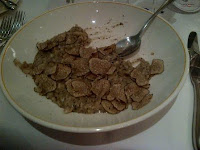 Jean-Louis then spoke about how he felt you had to have high density of planting, 12,000 plants/hectare, and old vine rootstocks to really make the most of terroir. Jean-Louis is one of those people you meet from time to time who clearly makes time to think about what and why things need to be done. His summation of wine is based on the idea of  “three meetings” that of soils and vine, grape and vigneron and finally bottle wine and glass (the bit we all love!). He feels that when making wine you have to be aware of all of these stages to get a complete wine. As a taster we now had Latricières-Chambertin Grand Cru 2010. Any fear that this would be too young to appreciate disappeared as soon as I put my nose near the glass, the fruit was brilliant, clear, bright and clean, I put “heavily fresh” in my notes. There was real depth but at the same time it begged to be tasted. There was structure there on tasting but it was so easy to drink and enjoyably so. Very fine. This wine was the very first parcel of Grand Cru that the family bought in 1904. Latricieres has a microclimate with a fresh cooling influence. Further adds to my feeling that 2010 is a very very good vintage. 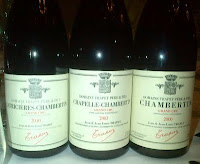 We then had two mature or maturing vintages of the Domaine’s other Grand Crus - Chapelle-Chambertin Grand Cru 2003 & Chambertin Grand Cru 2000 – both served with roasted Veal noisette with mixed root vegetables, gratin dauphinoise and crispy leeks. The Chapelle as a vineyard, Jean-Louis commented, has a skinny surface of stones and you have to be very gentle in working it, as a site it blooms and flowers first reflecting it’s warmer situation. The wine had a decadent richness and a slightly degraded “2003esque” nose with a dash of leather and tar. Over the evening it evolved and “freshened up”. Having been harvested in August it is clearly atypical but delicious at the same time. The Chambertin is something very special. As a site; the top is white Marl, the middle well drained and the bottom is deeper. This all adds significant complexity. The 2000 was at a lovely stage, one where it develops in glass. It is just getting into stride, a balance of fruit and savoury, with underlying but graceful power. Very impressive I would never want to decide which of this and the Latricières to own, at such differing stages of life they are both stunning. 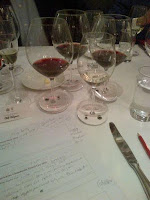 Then we had a real rarity at a C&B dinner, a pudding - Apple Tarte-Tatin and vanilla ice cream – with Sporen Gewurztraminer 2008 from the Trapet Estate, Andrée’s family estate, in Alsace. As with Burgundy this is farmed 100% Biodynamically. Sporen is a Grand Cru planted principally with Gewurztraminer and Pinot Gris but Trapet actually produce both Gewurztraminer and Riesling. The Sporen Gewurztraminer 2008 was delicious, unctuous and with medium sweetness it was both attractive and serious, went very well with the food and left everyone wondering why “Trapet Alsace” is not better known…it will be!!
If you get the chance to go to 1776 then do, I have focussed on the wines here but the food worked really well and the atmosphere was great! A cracking dinner.
Posted by Will Hargrove at 07:35