Just a few notes on some smokes:

Vegas Robaina Unicos - bought in Spain, I don't know the box code but certainly a young smoke. I have always wanted to like the Vegas Robaina cigars, who wouldn't, but I have struggled. This was a rich, medium to full smoke with lots of dark coffee, espresso and some dark chocolate, the problem I had was that there was no development from that profile so whilst perfectly decent I was more interested in my book that the cigar which is not how I like it. It may need some more time but I foundit a little crude and simple, say 87-88 out of 100. This is in-line with the other VR's I've tried so with there being so many great other smokes out there maybe I will just Park my interest in them for the moment. 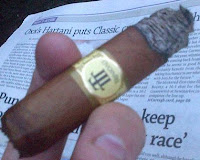 Trinidad Robusto T - Also bought in Spain, a smoke I have had a few times. I am a big fan of the Reyes from Trinidad which is a great 25-30 minute smoke, similar in length to the this cigar but much thinner. I smoke quite a few Robustos but they are not necessarily my favourite size, I like a slightly narrower ring gauge. This was a lovely cigar, some leather and strong tea, very balanced, no coffee aromas and little spice, it is at the opposite end of the flavour scale from something like a Montecristo Edmundo. Very classy and not overly young (not sure of the box code as it was bought as a single). The biggest surprise about this cigar is that Habanos SA, the sales and marketing body who look after Cuban cigars are discontinuing it. They have always had a bit of a problem with Trinidad as it is one of their premium brands but in truth it has never escaped from the shadow of Cohiba so it has come to be seen as a touch over priced. Trinidad as a marque is not being discontinued, or so we are told, so it seems very strange to get rid of the most popular, in Habanos' eyes, size. I think there will pretty much always be a Robusto from Trinidad it is just that it may appear under a different name at a later stage. I certainly hope so on this showing.

Partagas Short - Almost the last from a box I have long been enjoying, this was a little loose in construction but good all the same, a nice relax after the working week with a bottle of larger while trying to sort of the contents of my shed!!
Posted by Will Hargrove at 05:16