Last Thursday night I joined a group of six other wine merchants/traders for a tasting of 2008 White Burgundies followed by a cracking meal. The format was simple, everyone had to bring a 1er Cru and a Grand Cru from 2008. We went, loosely, from north to south and tasted in pairs. First up was Chablis. 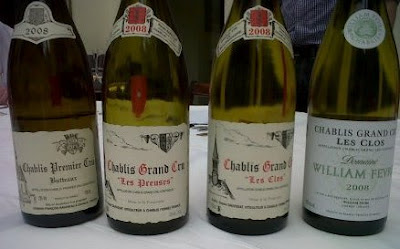 Chablis 1er Cru Butteaux, Raveneau & Chablis Grand Cru Les Preuses, Dauvissat. I really liked the Butteaux, rich, full, waxy and serious with good length on re-tasting later I might have been a little over enthusiastic (first drink syndrome) but either way it was very Raveneau and very enjoyable. The Les Preuses was, to me, more closed, more primary, green apple and a classical Chablis profile. The second pairing of Chablis were both from Les Clos - Chablis Grand Cru Les Clos, Dauvissat & Chablis Grand Cru Les Clos, Fevre. Of the two I was definitely in the Dauvissat camp. The Fevre was decent but had an edge of obvious oak that I am not mad on when it comes to Chablis, it was also a little more openly flattering than you necessarily want at this stage. The Dauvissat was excellent and the pick of the four Chablis for me. Spiced white fruit, lovely texture and unctuous on the palate but taut at the same time. It was now Corton time. 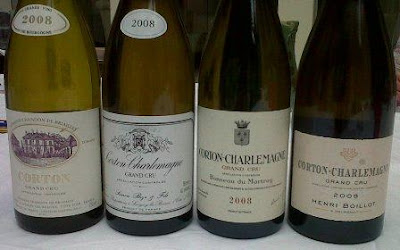 Corton Grand Cru, Chandon de Brialles & Corton Charlemagne Grand Cru, Bize - were the first pair and couldn't have been more different. The Corton Blanc was weird with a yeasty nose and an almost red fruit character, it may not have been clean but either way it just wasn't very good, as a Burgundy anyway. The Bize by contrast was very good, although not obviously Corton-Charlemagne in style to me. It had a smokey, bacon fat richness but also lots of fruit, a generous wine that I think will age well in the mid term. Corton Charlemagne Grand Cru, Henri Boillot & Corton Charlemagne Grand Cru, Bonneau du Martray - were next. The Boillot sadly was not right. Not corked just muted and lacking poise and tension, a shame as a few round the table and had it and enjoyed it. The Bonneau du Martray (watch out for bias) was very good with refined, focussed balance, not generous at the moment but all there with good length and a classical profile, one of the more long-haul wines of the night. 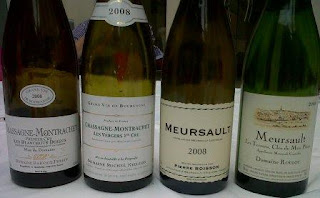 The next pairing was the one that I was most looking forward to as Chassagne is probably my weakest village in terms of Burgundian tasting experience. The two wines were Chassagne-Montrachet 1er Cru Blanchots Dessus, Darviot & Chassagne-Montrachet 1er Cru Les Vergers, Niellon. I liked both but especially the Darviot which showed green apple acidity but was then more rounded in the mouth before having a nicely dry finish and good length, appreciable now but certainly with a long future ahead. The Nielon is from quite young vines and it slightly showed, there was a sweaty old skool edge to the nose which I liked and a citric profile but it lacked a bit of depth. Meursault was up next - Meursault, Boisson Vadot & Meursault Tessons, Roulot. The former is made by a chap who did viticulture with J-F Coche-Dury's son and has become, it is rumoured a great friend. You can see that there may well be some collaboration going on here. The wine was wonderfully rich with the almost perfect young Meursault nose, smokey, nutty, expressive but also with a lot of structure, you could wallow in it now but it will age well. The Roulot was good too but a little more clumsy and not as poised, it was a little savoury with a note of cinnamon, very decent. 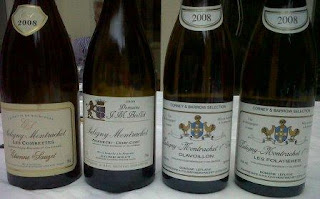 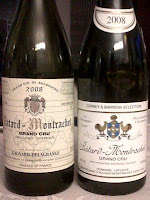 We had taken quite a while to get to this stage so it was decided that we would have the Grand Crus with food and what food it was, delicious lobster kicked us off with The Batard's- Batard-Montrachet Grand Cru, Gagnard Delagrange & Batard-Montrachet Grand Cru, Leflaive. These two impressed, the Gagnard Delagrange  was focussed but rich and the Leflaive whilst a little more evolved than I might expect was classically Batard in character with broad shoulders and a no nonsense character. From the richness of Batard it was now time for the Chevalier-Montrachet's. Having just had the Leflaive Batard it seemed sensible to kick on with the Chevalier-Montrachet Grand Cru, Leflaive. It was in rich opulent form, expressive but with more depth and refinement than the Batard, the richness was more than I expected. 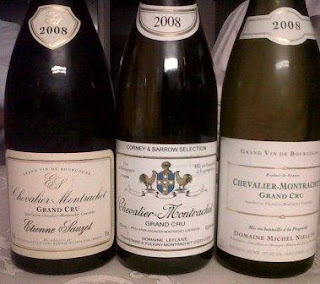 By this time we were on to the biggest plate of razor clams with bacon that I have ever had, delicious. The next two Chevalier's were Chevalier-Montrachet Grand Cru, Sauzet & Chevalier-Montrachet Grand Cru, Niellon. For the former I have a good score and a note that says "refined, rich, classy element. Lemon edge, taut, composed." and of the later I wrote "a strange but not unpleasant note of cucumber (not my shout but a good one), elegant, nervy, very fine". So this was the tasting side of things over. Our very kind host then dug into the Eurocave and got out some older bottles but before discussing them, do I have a view on 2008 White Burgundies? I thought the acidity was whilst good not as high as I expected. I think this is a slightly awkward "inbetweeny" time to taste as the wines are neither very young nor nearing true maturity. It did make me think that it is a good vintage and one to follow but as ever with white Burgundy these days it is a vintage to be careful with. I found the actual tasting surprisingly hard, my vocab is not so good with whites as reds anyway but the wines are more easily judged in side your head than on paper. As with all wines it is best and easiest  to judge a wine by drinking a glass/bottle/magnum of it! 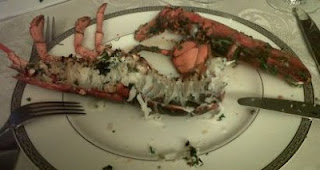 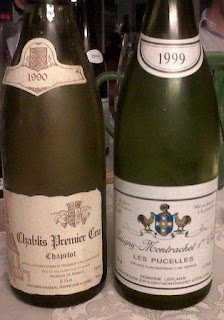 And so the older wines and what wines they were too. Puligny-Montrachet 1er cru Pucelles 1999, Leflaive & Chablis 1er Cru Chapelot 1990, Raveneau the Pucelles was delightful, elegant, at a wonderful but still relatively youthful stage, lighter in colour than many of the wines tasted earlier. I have, as mentioned in earlier blogs, had a massive amount of joy with the Leflaive 1999's, the Bienvenues being my white wine of the year for last year, they seem to be aging brilliantly. The Chapelot was even more heavenly though with a wonderfully complex nose, honeyed waxy palate and a savoury bite to the finish...serious kit!! These two whites were served with the best Turbot I can remember having. There was to be one red wine Morey-St-Denis 1er Cru Clos de la Bussiere 1999, G.Roumier, sadly I had to make a move after only half a glass but it struck me as a lovely, lovely wine, still in its youth but with a lovely combination of red and black fruit and that great balance of density and freshness. What an evening it had been, great fun, lots of interest and as ever lots of good chat, thanks to the host and well done to the chefs!
Posted by Will Hargrove at 07:35