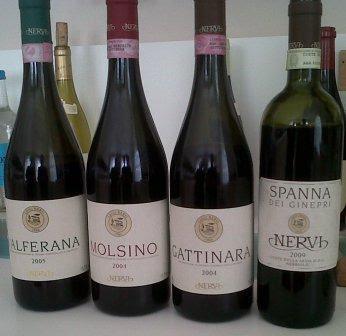 Until yesterday I couldn't remember ever having tried any wines from Gattinara. As a bit fan of all things Piedmont and Nebbiolo this was an unsatisfactory omission. The chance to taste the range of Nervi wines popped up yesterday, I was keen to grab it with both hands. All four wines are from the estate's own grapes and those grapes are 100% Nebbiolo. The ageing is all in very old (some too old) botti. Gattinara was known well for making long-lived expressions of Nebbiolo in the very northern part of Piedmont about an hour and a half north, north east of Barolo. The area in Gattinara under vine is now considerably smaller than it was as the cities of Turin and Milan proved a bit pull in terms of the workforce in the area. Nervi was set up by Luigi Nevi in 1906 and has one of the best reputations in the area. The wines I tasted yesterday  and re-tasted today are pictured above, they were tasted from right to left.

Spanna del Ginepri 2009 - Spanna is the local name of Nebbiolo in Gattinara. This is the "entry level" wine of the estate. It has a sweet leathery spice to the nose, savoury but with balance, a great restaurant glugger to be slightly patronising. When tasted again today it had stood up well retaining the sweet bruised fruit.

Gattinara 2004 - The main wine of the estate and from the very good 2004 vintage, there is a savoury character but in a pretty way, quite delicate with as menthol lift, impressive. When re-tasted it was again holding up well, a tarry menthol character showing and encouragingly the freshness had been maintained

Molsino 2004 - Molsino is a single vineyard site in the shape of an amphitheatre the middle of which faces south, south west. It is not always made as it is sometimes de-classified "down" into the Gattinara. There is a saline character here (something I like in Nebbiolo) and at the same time a little more richness of texture and intensity.  The re-taste today revealed a more meaty almost stock-like character but still enough poise, very good.

Valferano 2005 - This is a very small site on a different iron-rich subsoil (Valferano means Valley of Iron). The style is more lifted and less dense although some of this could be the vintage and is very different from the other wines. Fleshier in texture. The second day tasting was most revealing here as the minerality came flying out, very hard to describe, marked terroir here.

I was impressed yesterday and remain so today.
Posted by Will Hargrove at 08:46