So on with the Robusto sampler 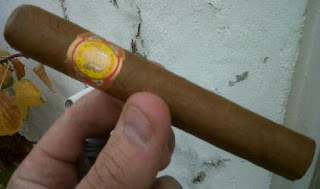 experiment/investigations, weekend just gone saw two sticks of the exact same dimensions. I always think of Robustos as 5 x 50 but both of these are a tad thinner at 5 x 48, it is a great size. The first up was El Rey del Mundo Choix Supreme on Saturday afternoon, I have always wanted to love these but never been that excited. First problem was that despite the great look of the thing it had a very tight draw, after about 5 mins of tugging hard on it I chose to try a plan. I could feel that the “blockage” was under the band so I removed the band and “lopped” an inch off the head, problem solved although the smoke was now 4 x 48 but never the less it meant I could assess the tobacco. Light bodied, more tea than coffee with a hint of nuttiness and creamy honey on the palate. This is a high quality tobacco and a great reminder of how good lighter bodied cigars can be. I will have to try another to get the full affect but this was mellow but not dull, 89-91 I’d say.

The next smoke was Romeo y Julietta Exhibicion No4, I’ve never

had this before but after a big Sunday lunch I decided it was time. Medium bodied, no more than that, with a core of dark (80-85% cocoa) chocolate and strong coffee with a dash of milk. This was fairly box pressed which I avoid if possible but the flavour was good. My problem with this smoke, and it is a bit unfair as it is a youngish smoke, is that it “didn’t go anywhere” it was quite monosyllabic. I will try the R&J wide Churchill soon and compare notes but the one I had on holiday in the summer (which means I may have been more relaxed and positive) was better than this. I must smoke another Exh No4 but currently 87-89.

Looking forward to trying more already…
Posted by Will Hargrove at 00:34