Last thursday was very much a Prum day. Dr Katharina Prum arrived at our offices in mid morning and led a fascinating and detailed tasting for the team talking about the history of this great (over-used word but not here) estate, the vineyard holdings, the wines and how they go with food. It was a great tasting. 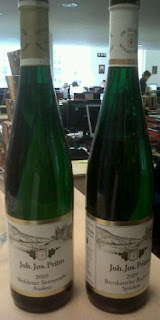 Shortly afterwards Adam (C&B MD) and I dashed Katharina off for a, supposedly quick, lunch at the excellent Gauthier in Soho with two customers. We were very well looked after and after a bottle of Champagne (Gosset 2000, very nice too) we had two wines to have wit the food. We almost all had the same food as Katharina - Risotto followed by salmon - as we all wanted to see how the wines and food worked.

First up was the Bernkasteler Badstube Spätlese 2009 which was delicious, precise, full fruited, primary of course but in great form, it worked well with the rich Risotto. During lunch we covered all sorts of issues, two I was keen to ask about were, decanting and ripeness levels. Decanting it has appeared to me does the wines a lot of good and Katharina agreed that when possible it does and that at the estate they will decant if there is time, the wines Katharina also likes to serve very cool so they can evolve in glass. On the ripeness levels I asked why it might be that in general I find my taste in Riesling is towards the Kabinett and Spätlese end of things? Katharina said that in younger wines that made perfect sense but that as I try older Auslese I would realise that there is so much intensity to the Auslese and a little less sweetness as they get older...I must try more older Auslese then (can`t wait..finding them is the problem!). As the dinner later showed the vintage has a lot to do with it too.

Next wine was the estates very top "normal" production wine (there are auction wines but that is another topic) and this was another 2009, the Wehlener Sonnenuhr Auslese Goldcapsule. The Goldcapsule refers to a tiny production of grapes selected in the vineyard for their sublime quality. The intensity of the fruit, soft white and tropical is staggering given the low alcohol (7% ish). These are amongst the world's let alone Germanys most attractive, long-lived and extraordinary wines. The amount of ripe fruit means that the "sweetness" is so natural that it goes brilliantly with the food, the Salmon, was delicious but all the better still for the wine. With dinner to follow (see below) we didn't extend lunch much further.

And to dinner, at the world renowned Nobu (Old park Lane), Katharina despite being incredibly well travelled had not been before and we were all very excited. The room of 60 people were in for treat.

As an aperitif we had 2010 Kabinett, there was only one Kabinett in 2010 as the year was more biased towards the richer styles. This worked really well, it is clean, fresh and primary but very mouth watering. The meal itself started, after an introduction from Oliver Hartley and an overview of the wines from Katharina, with assorted Sushi and Sea bass Tiradito with these two we had two contrasting Kabinetts - 2009 Bernkasteler Badstube and 2008 Wehlener Sonnenuhr - these two vineyards are about 3 km apart and have differing styes. The vintages two are very different, 2009 more rich, rounded and extravert, the 2008 more classical and taut, this showed in the wines with the Bernkasteler after being a little closed opening up to more rounded fullness. The Wehlener by contrast was racier and had extreme poise. the combinations were great with clean flavours in the sushi and a little spice from the Tiradito going especially well with the 2008.

Katharina next spoke about the 3 upcoming Spätlese - Bernkasteler Badstube 2007, Wehlener Sonnenuhr 2007 then Wehlener Sonnenuhr 2003 which we had with Lobster Salad with spicy lemon dressing, Rock shrimp tempura with creamy Spice sauce, Black Cod with Miso. 2007 is a very classical vintage with poise elegance grace and balance, similar in many way to the most recent release 2010. 2003 by contrast but in keeping with the rest of europe was a freak year of low rainfall and very high temperatures. The 2003's Katharina feels will age very well (as the 1976's have for a similar reason) as there is structure and acidity it is just not apparent because of the opulent fruit. This trio were brilliant. To my mind the Badstube had rich texture on the palate was a touch closed and reductive on the nose, no bad thing, may be not perfect yet, the Wehlener was one of my wines of the night, rich yet mellow, highly strung but inviting, very classy and delicious especially with the tempura, a match made in heaven. the 2003 I think surprised everyone with it's balance, it was an extrovert but not an outlandish one and great with the Miso Black Cod.

Katharina was back on here feet again, no rest here, for the final three wines the first two - 2004 Wehlener Sonnenuhr Auslese & 1998 Bernkasteler Lay Riesling Auslese were served with Beef Kushiyaki then the 2003 Wehlener Sonnenuhr Auslese Goldcapsule was served with Exotic Fruits. The 2004 vintage was more akin to 2007 and 2010 in being poised, balanced and delicate. I thought the 2004 was a true star, light colour and just opening out, really beautiful. The 1998 was richer and fuller with a bit of development as you'd expect. The match was a tricky one and whilst they went well I preferred both wines after the food more than with, just one of those things. The Goldcapsule 2003 was some finish though, very expressive but you could see there are years and years of development and intrigue to come, not one to drink too early despite how wonderful it is now.

The day of 11 Rieslings was over for me...a real shame, great memories. I loved Prum wines before the visit but do so even more now.
Posted by Will Hargrove at 00:33