Not bad for a Monday 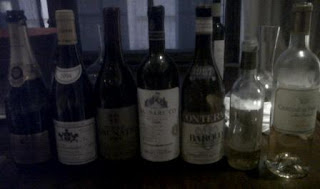 A rather unusually good Monday night with a couple of colleagues/friends and a mate at No1 Lombard Street – we were very well looked after by Matt, great food, service and care for the wines, but I am afraid this will be all about the wines rather than food.

We started with Delamotte Blanc de Blancs 2002 which has just been released, it is tight right now as you would expect and really want it to be. Still delicious it is best kept another 2 years before being in no rush to drink, at about the same price as Grand Marque NV this is a great Champagne. We then moved on to Puligny-Montrachet 1er Cru Clavoillon 2004 from Domaine Leflaive, decanted, this was great, I wondered how open it would be, it was at a lovely stage, gunflint on the nose and then good fruit – I was pleasantly surprised by how good it was.

One of the main reasons for the gathering was to show some great older Piedmont wines, these were supplied by my mate and Barolo Guru. All three were in immaculate condition and showed three things brilliantly: A fully mature Barolo, then a great Barbaresco and great Barolo, the latter two alongside each other was a great contrast…and so to the wines:
Barolo Brunate 1964, Marcarini - Brick red hue, lovely nose with a hint of ginger, it is developed but not tired at all a great bottle for the age. Lovely. I have had a lot of luck with older Marcarini including 1978 Brunate and 1970 Brunate...this made it three from three! Barbaresco Santo Stefano 86, Bruno Giacosa - Very good colour right to the rim, the nose was more Grand Cru Red Burg like than Piedmont, perfumed, gorgeous, rich but pretty, very good indeed, we agreed that it was at its peak, very elegant. Barolo Cascina Francia 87, Giacomo Conterno - A savoury, powerful wine with dark fruits, delicious, brooding, a dash of "frazzles" about the nose. Brilliant to compare it to the Giacosa, so different. Youthful colour. As good a 1987 as I have had from anybody anywhere (that’s not damming it with faint praise I hope).

We then had a pair of Sauternes de Fargues 05 which was balanced and very good, nothing like the intensity of the 2001 I have had recently but at this young age that’s a good thing, really drinkable. Alongside it we had a half of Doisy Daene 83 which showed really well, a little bit of marmalade and at a lovely stage but probably not worth keeping any longer than this (or may be that is just the format?). And that was that, a realy fun and relaxed evening of great wine and good food…will be doing it again…
Posted by Will Hargrove at 04:46