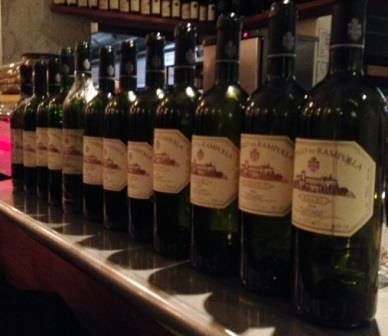 This was a cracking tasting of Sammarco and Vigna d'Alceo from Castello dei Rampolla. I am almost a month late writing it up. Hosted at Zucca on a Monday night organised by Mr S as ever with great back up from Sam Harris and Zucca, a great pasta after the tasting as ever!

Prior to this tasting these were wines I was very aware of but not experienced with - Castello dei Rampolla, one of Tuscany's benchmark properties, is located in Panzano's famous Conca d'Oro. Rampolla's neighbours include Fontodi. The di Napoli family has owned the property since the mid 1700’s. Alceo di Napoli inherited the estate in 1965. In the early days, Rampolla sold their fruit to Antinori. In 1975, Rampolla began making their own wines under the guidance of Giacomo Tachis.


This tasting looked at the two flagships wines of the estate - Sammarco is Cabernet Sauvignon, Sangiovese and Merlot which saw it's first vintage in 1980 and was named after a family member "Marco" who died in a helicopter crash in the 1980's. Vigna d'Alceo which started with the 1996 vintage and is named after Alceo di Napoli who passed away in 1991 (cepage below).
Alceo di Napoli had always wanted to plant high-density vineyards with Bordeaux varieties, something that was unheard of in Chianti-shire back then. In 1988, di Napoli started his project. Importantly the land he chose had never been under vine before. Cabernet Sauvignon was planted in 1990 then Petit Verdot in 1991. After 1991 Alceo's children Luca and Maurizia (who have "driven" the estate brilliantly now) stepped-in to run the family estate. 1994 was when the estate converted to biodynamic farming, the d'Alceo plots had essentially been farmed biodynamically from the off. Currently d'Alceo tends to be 85% Cabernet Sauvignon and 15% Petit Verdot. The first vintages spent about 18 months in French oak barrels. Since 2007, d'Alceo spends 10-12 months in barrel, with only 10-15% new barrels, a decision Rampolla took to preserve more freshness and reduce the flavour impact of oak. More recently, Rampolla has moved increasingly towards larger 500 ltr tonneaux as well for the same reasons.
Anyway enough back ground. The notes and scores below are mine and mine alone. Generally they did seem to go with the consensus as it happens. All bottles had been double decanted in the 2 hours prior to the tasting, the wines were served in pairs.

Sammarco 1983 - Lovely colour, really quite red. Beautiful nose, bright, fresh, easy and gentle with cedar and red fruit. Soft palate, a shad chalky in texture. Overall soft and lovely. Could drink a lot of it! 94

Sammarco 1985 - Deep and quite saturated colour, slightly more closed initially. Richer, denser and darker than the 1983 in every way. More intense texture also, a little savoury and iron-like, a metallic density without that meaning to be a criticism. Had a more Cabernet character. No rush to drink this. Not so much my style and the score is not helpful as I prefer the 1983 but this is arguably a better wine. 93-95

Sammarco 1986 - A colour between the '83 & '85. A combination of coffee and bell pepper. Good weight. A little drier than previous wines really quite savoury and "stocky" on the palate. A little shorter also, better than I am making it sound!! 90-91

Sammarco 1988 - A little more saline (always a good thing in my book) and therefore more Italian. Very bright, real purity, lovely gentle sweetness, persistent and very long. I feel I should write more but as with great wines it is hard to describe why this is so good. Complete. 96-97

Sammarco 1990 - More lifted and higher-toned, more extrovert. Good. Less fruit persistence than the 1988 but a good good wine. More a nose and initial palate wine. A shade hollow possibly but that might just be because the excitement is front loaded. 92-93

Sammarco 1995 - More intense, different even. A toffeed sweetness to the nose, quite glycerol. Wears it's power less elegantly somehow. A little more modern, the toffee does link to mint somehow. Therefore it comes across as not as integrated as it might be. 89

Vigna d'Alceo 1997 - Richness, ripeness, intensity and density. Quite international. It's impressive and given that some 1997's are OTT this is good. It doesn't strike me as very Italian. There's an odd but not unattractive note of tomatoes - rich sweet ones. A wine that still needs time. Hard to score but warrants 92-94

Vigna d'Alceo 1999 - A little more savoury than the 1997. More Italian too which is good. It is quite intense but in a balanced savoury masculine way. The best of the Alceos to my mind and a wine with quite a future also. 94+

Sammarco 2004 - Tasted alongside the Alceo 2004 below. This was delicious, fresh red fruits not over done, a nice light touch to proceedings. Easy, almost less serious, very drinkable. Mid-weight. One of those wines that is approachable and balanced now but may well age and put on a little weight. 92

Vigna d'Alceo 2004 - Again red fruit with more acid and structure than the Sammarco 2004, rich but elegant, cherries and freshness but with weight. Will be a wine to follow. 93

Sammarco 2006 - A little bit too oak covered, hopefully this will integrate. Quite a tough and structured wine, masculine and needing time. There is a good texture I just think it was showing in a muted style. 90 (this may well be proved harsh)

Vigna d'Alceo 2006 - A big chap, tight, dense and again masculine now. Needs time for sure, muted but with weight to the palate. If this all mellows in balance then this will be quite something but there is a danger it may be a little clumsy. 92(+?)

Conclusions:
It was a fascinating and very positive tasting, the wines overall showed well, good temperature etc. The only wine I felt disappointed in was the Sammarco 1995 as I just can't see that it will integrate with the oak as it is already 19 years old. If people have different experiences of the 1995 I'd love to know. The rest all had a lot going for them. My overall impression is that Sammarco is a wine to buy blind and loyally, it will always be good and has lovely easy balance. The Vigna d'Alceo I tried to score as objectively as possible and actually looking though the notes I liked it but I feel it is a little bigger and more international in style than is ideal (to my taste) at the stage the wines are now…with more time this may well rectify. It is a good wine from a clearly exciting stable and the fact the oak is being lessened sounds great.

A great evening. Sammarco goes firmly onto my BUY list!
Posted by Will Hargrove at 03:10