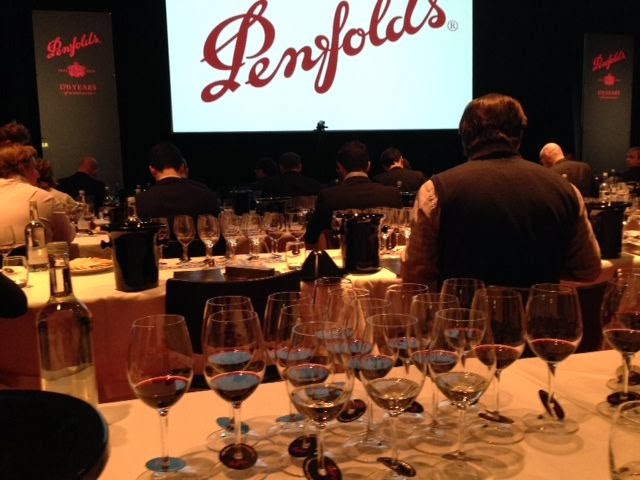 I've never been to one of these launches before so here are my notes on the Penfolds ‘Bin Series, Icon and Luxury’ collection wines launched in London this week and embargoed until Friday 28th Feb 2014. I'll be honest and say I didn't really know what to expect, I thought I would appreciate them but not be wowed. I was very pleasantly surprised. There was a live video link to Peter Gago, the Chief Winemaker at Penfolds which was informative and well pitched.

THE WHITES
2013 Bin 311 Tumbarumba Chardonnay – Very little oak shows, has a little sweetness but not cloying, open with a little spice, pleasant wine if not serious. 16

2011 Yattarna – From fruit across four states, the "best of what is available". There were comments that the wine has become more cool climate of late. This had an elegantly creamy tropical fruit character but without being at all sweet or sickly. The oak is very well balanced and just supports the fruit and texture, not over powering it at all. The texture is superb, impressive. 18-18.25

2012 Reserve Bin A Adelaide Hills Chardonnay - Described by Peter Gago as a real "show wine". Made from a range of vineyards across the scale. It was a dash reduced on the nose (I like that) and then had a lush but not OTT and rich palate. A little apple fruit and some lanolin show also. Not, for me, quite the depth and texture of Yattarna but very good. 17.5-18

THE REDS
2012 Bin 2 Shiraz Mourvèdre – A simple wine, crunchy, crimson fruit, a little too viscous, ok but not stunning. 15

2012 Bin 138 Barossa Valley Shiraz Grenache Mataro – Interesting comment on this wine that it is kept as it's component parts until it is bottled. Gago also commented that the 1998 and 2002 of it are lovely now. Cherry red fruit and a little white pepper. Tannin is there but balanced, good acidity. 16-17

2012 Bin 128 Coonawarra Shiraz – Spearmint notes, freshmint also but not "ugly" mint. Palate is a little taut and slightly dry but this is a good wine, finish is ok but not too long. 16.5-17

2011 Bin 28 Kalimna Shiraz – First vintage was as long ago as 1959. A classy complete nose, more traditional. The palate is impressive also and quite open. I noted that I'm not sure I should think it is very good but it is! 17-17.5

2011 Bin 150 Marananga Shiraz – A slightly green and clumsy palate that is almost aggressive. The nose is subdued. There just seems a real lack of charm. 14 (may be I should have checked other people's glasses)

2011 Bin 407 Cabernet Sauvignon – There were comments that the 1990 of this is excellent now and that there is not rush with the 1994, 1996 or 1998. A classical dark fruited nose but nicely lacking in being OTT. Good density. There is a dash of subtle mint and also some eucalyptus but it is all "in check". A slight dryness of tannin but not worryingly so. 17.5-17.75

2010 St. Henri Shiraz – Gago commented that this will rival the '90 and '71. I must be a heathen as I know this will get (and has got) great write ups etc but I just don't get it. It is impressive but for me it is just all too much. So, my score, totally on my opinion, would be 16-16.5 BUT I totally get that those who know their Aussie Shiraz look for different things so may be 17.5-18 is fairer. Either way my opinion is not going to matter to any wines success so there we go. My reasoning is that I found it a little too inky and dense for me. The nose is saturated and powerful. The digestibility would be a question for me. Intrigued.

2011 Magill Estate Shiraz – Inky rich but with a lifted nose also. The aromas come out more and more with air. Does have freshness and despite a slight hole in the mid palate (which may well disappear) it is good. 17-17.5

2011 RWT Shiraz Barossa Valley – A lifted nose, lovely, has an expressive sweetness but stops short of being too much. Quite a big chap and will it integrate? Impressive and the almost floral edge makes me give it a thumbs up. 18

2010 Bin 169 Coonawarra Cabernet Sauvignon – Gago commented that this wine has a more contemporary feel than the 707. This wine was also given Cabernet of the year by James Halliday. Very very Cabernet nose, not overly dense, good balance has a classical dryness to the tannins. Good wine 17.5-18

2009 Grange – 98% Shiraz 2% Cabernet - "Like 1999 a bit of a sleeper" (Gago). Very shiraz in style but manages to meld density with freshness. Oak does seem prevalent but there is nothing to suggest it won't integrate well. There is charm, ripeness and balance in there. 18

2010 Bin 170 Kalimna Shiraz Block 3C - A commemorative wine for the 170 years of winemaking although interestingly it was made one other time, in 1973. The site (Single block 3C) this was from does tend to make it into Grange. Drier and more restrained nose than Grange 2009, has a lovely moreish texture. My note said it is more of a Syrah than a Shiraz. 17.5-17.75 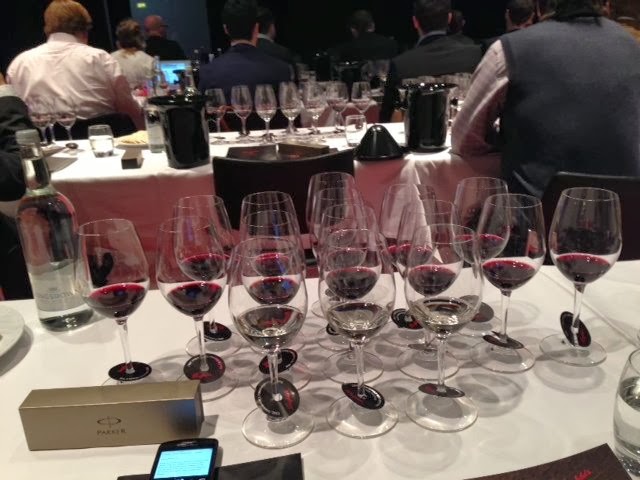