It has been a couple of weeks now since the release of Salon 2002 but it was a couple of tremendous days so I am very keen to get it down on the blog. I'll openly declare bias as I work for the UK agent but I have always been a massive fan and rate Salon 1982 as the finest Champagne I have drunk.  The 1982 is a vintage I will come back to. For some other Salon & Delamotte (Delamotte is Salon's sister house and never to be under-rated) notes please see the blog from Barcelona nearly two years ago. 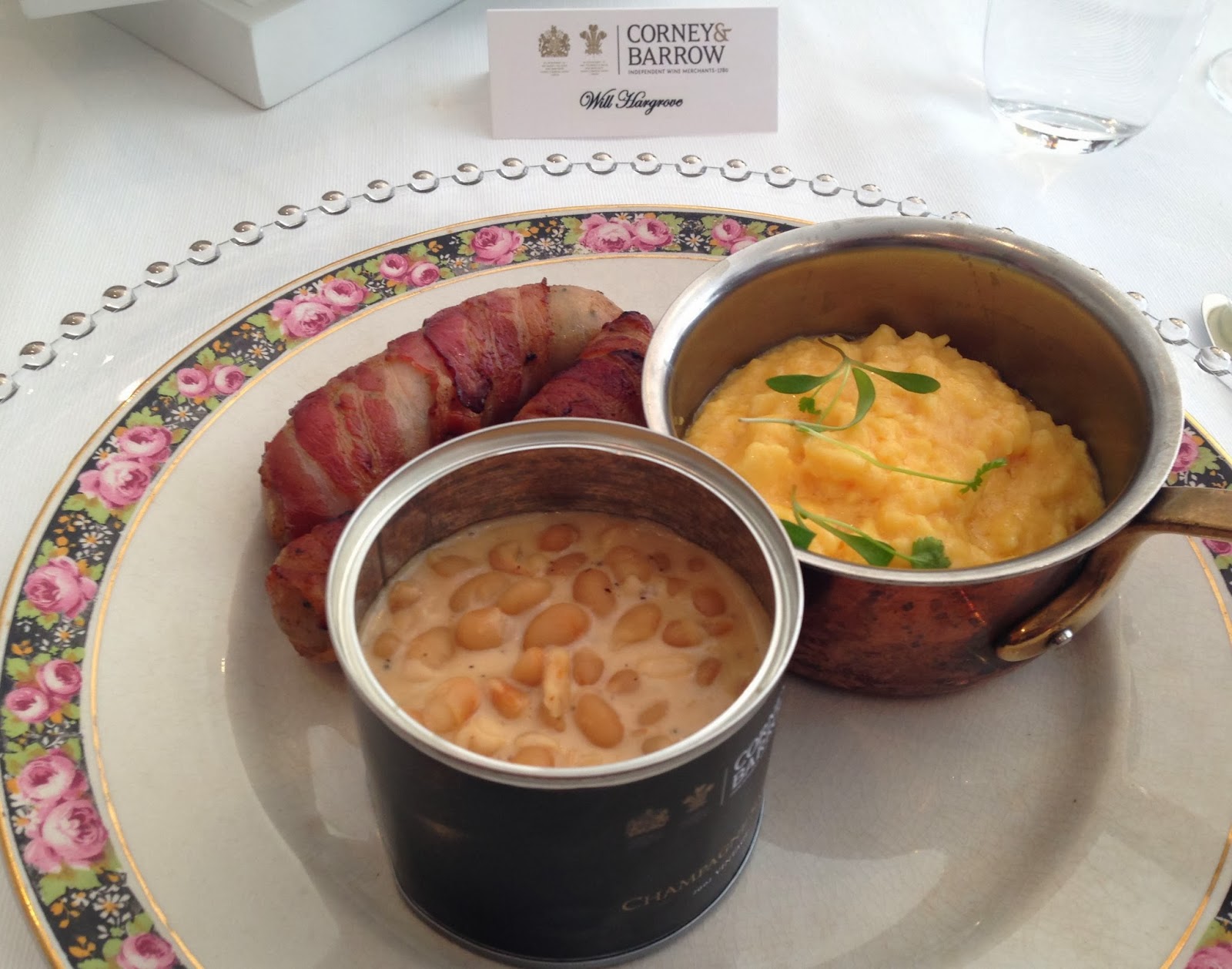 So the launch started with an English breakfast, the back drop to this being that the Salon 1999 was launched with Fish & Chips, we wanted to stay quintessentially British. The breakfast aperitif (now that's how to live) was Delamotte Blanc de Blancs NV from Magnum. If I had a house Champagne this would be it, so drinkable, generous yet precise and focussed, very flexible. After everyone had gathered it was time for Didier Depond (see Video below) to officially launch the Salon 2002, only the 38th Vintage of Salon. He spoke very well and I'll leave you to hear his words. The wine (and Salon is as much a wine as a Champagne) was excellent. You'd expect this but then expectation can be the mother of disappointment, not here! Didier made the comparison to 1982 and I can totally see where he comes from, the 2002 is much more in line with 1996 and 1982 for me than the more generous vintages like 1988 and 1990 (possibly 1997 also). There is a very fine biscuity nose (very thin elegant biscuits!), then small white flowers, the palate has a lovely combination of volume and intense minerality and almost savoury edges, the saline element is terrific too. Stunning. Very much a keeper though, plenty to see now but also so many reasons to forget it for 5-10 years, at least. To put it in context against the other vintages not already mentioned I would have the 1985 and 1999 as being more taut, 2002 has just the right balance of minerality and potential generosity.

The breakfast featured beans in a Salon tin made with Delamotte Brut, the wine carried it off well and went brilliantly with toast and marmalade. Salon is a terrific food champagne after all.

There was a great party in the evening at which the same two wines were served. There are quite a few clips in the video from this evening - including yours truly in a white dinner Jacket (the theme being the 1920's when Salon was created)...

Various over events followed the following day but come the evening it was time for a select dinner to look at a few vintages of Salon and Delamotte in the context to food at Sketch in the West End. I had not been before but have to say I enjoyed it tremendously…careful food to match the wines all served in a tremendously effortless and un-intrusive way, the conversation flowed as much as the wine did.


Delamotte Blanc de Blancs NV started us off, as ever, with some Canapés. Once we were all seated it was time for a starter of Pan-fried Scottish Scallops with Delamotte Blanc de Blancs 2004. A wine that was released on to the market only about a year ago. It's a beauty, refined but generous. I feel that the only downside to 2004 for Champagne and especially Blanc de Blancs is that it followed the hyped (rightly so) 2002 vintage. This worked well with the Scallops and the wine itself will be brilliant to drink over a long period, endless comparisons with the 2002 and 1999 (if you can find it buy it! or at least tell me where!) will only add enjoyment as long as one remembers they are different wines and it is not a competition.

The next course of Sautéed Red Mullet was delicious with the Salon 2002 and Salon 1999. As I mention above the 1999 is a "sleeper" and along with the 1985 remains a very savvy buy. These two wines, 2002 & 1999, played with each other and proved a good test for the taster. The 2002 was a little more coiled up and taut than it had been the previous day but this is more that likely my taste buds not the wine. The minerality and cleanliness but whilst retaining character is quite something. The 1999 is so correct and balanced it may never have the extrovert nature that with some with the 2002 but remains complete and impressive.

Roast Corn-Fed Chicken was up next and sat on a bed of sweetly, mildly curried puree, it worked well with the food as a contrast. Salon 1995 is a wine I have an emotional attachment to as I went to the launch in Biarritz many years ago. On this showing I was very impressed, however, the style is slightly different to my mind, slightly more generous and a little more toasty. It divided opinion, some found it less Salon-like I found it a highlight. What's that thing about expectation? Well, the 1995 exceeded mine. Salon 1983 was the other wine with this course, served from two recently disgorged (for the occasion) magnums. The 1983 has always been a little bit of a mystery to me, it can be superb (as these two magnums were in different ways) and it can be a little flat and loose, even flabby. Didier was very honest in admitting that the 1983 is consistently inconsistent. But that is wine, it is not a standardised product and if this happened with more vintages you may have an issue but here it just adds intrigue. The first magnum (and Didier is a massive magnum fan, just wait for the 2008 Salon - that's all I am saying) was electric, mature yes but citrus fresh, the second was more as you would expect, great for 31 years of age, a little more coffee and yeast but very good.

And so to the last course, aged Comte with Delamotte Collection 1964 from magnum. The "Collection" idea with Delamotte is to have a few bottles and magnums that are disgorged to order and show the incredible potential of the House. Now I will declare one thing I have written before. I am more a fan of bottle aged Champagne than lees aged Champagne but that is purely a personal preference. The 1964 was three people around the table's birth year which is always fun. The wine is also not a Blanc de Blancs as the vast majority of the Delamotte's will be. There was a time in the 60's and very early 70's (though I need to check my notes) when there was a Brut Vintage. This is no longer the case. The rich flavours worked well with the cheese's salty tang.