Now I've been lucky to have a few rather splendid meals and wine line-ups in my time (far more than I deserve if I am being honest). This was "right up there".
A 12.30 meet time and a seat at the "Experience" table at Royal Hospital Road was a good combo. Jan (Konetzski, Sommelier) looked after the wines brilliantly and as always Clare (Smyth, Chef) had orchestrated a brilliant menu. The food is at the bottom of this blog and was simply brilliant.
Proceedings kicked off with a magnum of Le Mesnil Blanc de Blancs Grand Cru 1989 from Bruno Paillard. I used to buy Bruno Paillard NV in France years ago and always loved it. I never knew he had any holdings in Le Mesnil this was a lovely magnum in great shape, at a lovely stage of it's evolution, a little bit of weight from the age but still the focused precision of Le Mesnil. 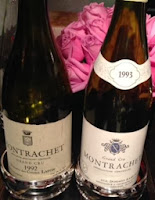 From here we went to Prum Wehlener Sonnenhur Auslese GK 1949, this was of course fully mature with a definite aroma of Lapsang Souchong and herbal tea, a slightly dry marmalade as well, it has become quite dry but the fruit was still there, fascinating. The partner to the Prum was Auslese 976 from Muller which was amazingly fresh for such a dry and hot vintage, it was soft, mellow lemon and lime with a little light honey edge to it. Really impressive, of the pair I found the Prum more intriguing but I think more of the group preferred the Muller by a shade.
White Burgundy now took centre stage with a Pair of Montrachet's. Montrachet 1992, Lafon had an almost lemon spritz and a lighter colour then there was a mocha note that weirdly I usually associate with older, late disgorged Champagne. I liked it. The Montrachet 1993, Ramonet was more evolved with a dry intensity at the same time as a little honeysuckle, it was good and very enjoyable but possibly not the very best showing of that wine.
Now we had a Red Burgundy extravaganza with three great wines both being represented by the 1991 and 1999 vintages. Two vintages that have a real purity of fruit focus. Each pair was done blind and each time the consensus (and certainly me) got it wrong. 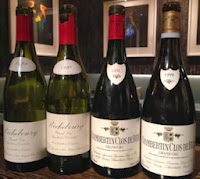 Grands Echezeaux from Domaine de la Romanee Conti was up first. 1991 first, this caused me problems as I know this wine quite well and rave about it on a regular basis as being a (under the radar) gem. This was a looser, less poised and less precise showing, more savoury than "normal". The 1999 was weightier, more dense, just richer actually. This, may be, doesn't quite have the class of the 1991 (on usual showing) but would be great to try again in 3-5 years or so. May be it just wasn't a DRC day as the pair didn't quite sing as they have done.
The next pair was Clos de Beze from Rousseau. Not a wine I know very well but both were impeccable. The 1991 had staggering purity (in fact the clarity and colour of both Rousseau's was a delight in itself), real focus and a tight red fruit that made this a very exciting glass, there was the early signs of the tiniest bit of maturity but the character was still primary (if that makes sense). The 1999 was cracking, amazing depth and seriousness but at the same time had red fruit and clarity, if you own this you should be delighted.
And so the last Burgundy pair was upon us and with Rousseau and DRC drunk what would be the last name? Leroy and namely Richebourg. The 1991 was in "wine of the day" territory. My notes are contrasting in a way but it just goes to show how multi-faceted the wine was. Both savoury and sweet with depth and opulence also. Blackberry fruit , delicious with a little bite, stunning. Refined and with freshness, in a word "complete". Obviously the 1999 followed and was a little more forceful but also completely "left", cloudy and without any pretence whatsoever. There was menthol but also a herbal deliciousness, soft succulent and also young, a very splendid wine now with lots more to come.

What one now needed was Port! Quinta de Noval Nacional 1967 was the bottle in question and once Jan had used the Port tongs we were "in". It was simply staggering, a wine seven years older than me and still in many ways primary, if mellowing. I thought it was simply brilliant, so poised, so harmonious, a puppy in many respects but as with all great bottles it was showing well now. If I had a bottle when would I drink it? I genuinely have no idea, it has everything so drinking it would always and never be a mistake if that makes any sense.
Our host never lets a lunch go buy with one Sauternes and on this occasion it was two wines that I have had before Chateau Yquem 1976 & Chateau Climens 1971. The former is intense, rancio, rich and not over sweet, hedonistic and like liquid Tarte Tatin and Creme Brûlée combined. The Climens is more elegant, less rich, a lovely glass, they are a perfect foil for each other.
I must list the food as the dishes were glorious, I think we all might have picked different favourites but really there was no weak link.

Ragout of Hare with pappardelle and chestnut

So there you have it a simply brilliant lunch with perfect food and exquisite wines. "Memorable" doesn't come close...
Posted by Will Hargrove at 12:07