Beef and Bordeaux at Hawksmoor...

With the wine lover who set up this great Lunch leaving London for a while a Bordeaux orientated dinner was called for! Everyone brought a bottle our host brought several!
So to kick things off it was Beef tea which sparked a conversation about the joys of "Bovril & Sherry". It was delicious in a savoury and salty way. The first two whites were then poured 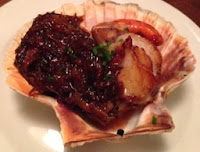 Cervaro della Sala 2001 which was the lighter and more focussed than the Cervaro della Sala 2007. It was a really fascinating contrast as you would never have had them that way around. The 2007 showed a little bit of yeasty oxidation from what was a hotter vintage. Next up on the food front was Scallops poached in Red wine with Short rib & mash a dish I thought was seriously delicious. We were onto a pair of New world Chardonnays now: Cakebread Reserve Chardonnay 2008 betrayed its 16% in my opinion and was nicely harmonious with the oak, that can show at times, being well integrated. The second wine was Leeuwin Estate Art Series Chardonnay 2008. I had never had this before and I was impressed crazy though it sounds I was solidly in Chablis 1er Cru, the only reason I use to justify this is that the bottle was under screwcap and had a very slight spritz. 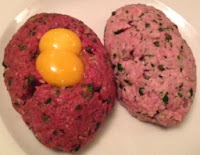 We were then into the reds with the Steak Tartare - Beef vs Veal course. Beef won easily to be honest, more richness and better texture plus the egg works better. The two wines for this course were Rauzan Segla 2004 and Clos du Jaugueyron 2004, both from Margaux. The Rauzan had a good classical nose and then a slightly short finish, I liked it but I've found many other 2004's more quaffable and that was the case with the more lush and sweeter Clos du Jaugueyron. The food courses did not need to get bigger but they certainly did with a rather vast Beef shin macaroni. That we ate with Clos du Jaugueyron 2000 & Leoville Barton 1990. The former did perfectly well with a slightly savoury edge and a slightly tough structure, it just needs time. The Leoville Barton by contrast was open, mellow, complex and delicious, really very impressive. Perfect now.

So now it was time for the "main course" of Bone-in Prime rib, Porterhouse, Hawksmoor Sausage, Beef dripping and chips. This was eaten slowly (as fast as was possible by this stage!) with five Bordeaux. Beychevelle 1988 was charming and poised, more open and obviously enjoyable than I associate with 1988's. Tertre Roteboeuf 1997 (my bottle) confused people blind but then FrancoisMitjavile's wines do, it was rich in iodine and a little tar but also had the trademark bruised fruit. Cos d'estournel 1989 was expressive and expansive with a savoury freshness and a showy persona, a little exotic. The Pavillon Rouge de Chateau Margaux 1998 was pure and primary, not overly complex. That is not the way you could describe the last red - Chasse spleen 1955 (re-conditioned in 2007) - when tasted blind we were all thinking 1980's or may be 1970's but certainly not the 50's. There was a lovely saline, bacon fat nature to the wine but still sweetness of fruit and no brown tiredness.
One last course remained - Suet sticky toffee pudding with Clotted cream. A nice light and refreshing ending! The two wines, both in halves, contrasted each other with the Lamothe-Guignard 1989 being a little weary and dried out, drinkable but not so charming. The Lafaurie-Peyraguey 1988 was almost the opposite, fresh lithe and with good focus.
Very little eating happened the next day!!
Posted by Will Hargrove at 10:06