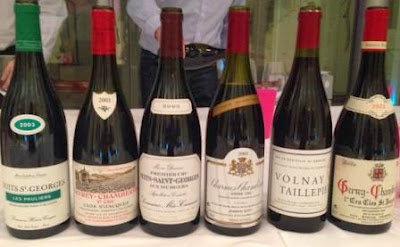 This was a very interesting tasting that followed on from two similar but different "exercises"; 2010 White Burgundies and 2008 White Burgundies. The format was similar in as much as we did half as a tasting without food and then the other half at Trinity Restaurant in Clapham. The difference came as this was two vintages (2003 and 2001) and  also red Burgundy rather that white. The 2003's were all 1er Crus, the 2001's all Grand Crus. There was one exception in each flight both caused by the same person…oh Woo!!

There was much debate about scoring and whether it was supposed to be in context of the vintage or not…I went with not and tried to just rate them overall.

Beaune 1er Cru Clos des Ursules 2003, Jadot – Quite a rich, brownly fruited nose, a little stewey which was as many expected. It was quite savoury already and dry on the finish. This may well have been ok when very young but is pretty uninteresting now. 13/20
Monthelie 1er Cru Les Duresses 2003, Lafon – Deep in colour, slightly lacked clean focus but in fairness had weight without any stewed element, got better in the glass and would have been one to decant. Not necessarily Pinot purity but a good wine. 15.5/20
Volnay 1er Cru  Taillepieds 2003, d’Angerville - Deepish in colour, a little raisined on the nose but not unattractively so, a little bit of freshness and some licorice on the palate, quite good. Had enough refinement. 16/20 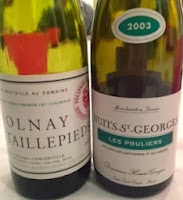 Nuits-St-Georges 1er Cru Les Pruliers 2003, H.Gouges Corked and not only a little bit!! No Score.
Nuits-St.-Georges 1er Murgers 2003, Meo-Camuzet - Frazzles and bacon fat, a totally different shape and size to the earlier wines, more northern Rhone than Burgundy, a decent wine but not a charmer at all. It is easy to say so now but I'd have said "turn the winemaking volume down" in such a vintage. 14/20 (as a Burgundy), 16/20 (as a wine)

Gevrey Chambertin 1er Cru Corbeaux 2003, Serafin - This was tasted later on but is recorded in context here, it was soft fruited, juicy, nice, a soft touch that suits the ingredients. 16.5/20
Gevrey Chambertin 1er Cru Clos St Jacques 2003, Fourrier - A slightly menthol note on the nose but a good one generally, red fruit peering out through a little bit of cheesecloth, impressively primary. My note ends "I like this". Never a bad comment. 16.5/20
Gevrey Chambertin 1er Cru Clos St Jacques 2003, Rousseau - Lovely fruit especially in the mid palate, then a nice tautness. Redder fruit than the others, classy actually, made you forget the vintage. 17/20
Charmes Chambertin Tres Vielles Vignes Grand Cru 2003, Roty - Bizarre at best. Nose quite decadent and high toned with a saline character. Then on the palate a lack of charm let it down, clunky and OTT in extraction and dry fruit. All a bit forced. 15/20

To start dinner we then had three Chablis from Dauvissat:

Like a beer at the end of a day tasting "Primeurs" in Bordeaux they were bliss. Are the wines of Raveneau and Dauvissat still a shade under appreciated given the prices for what can be more ordinary (in terms of Grand Cru white) a little further south? I think may be they are.
Chablis 1er Cru Vaillon 2008, Dauvissat - Lovely, open and generous, crackingly ripe but also mineral, properly delicious. 17.5/20
Chablis 1er Cru Le Forest 2008, Dauvissat - Clean and very classy, many seemed to prefer this to Vaillons but actually, right there right then I preferred the generosity of the Vaillons. I'd be delighted to own either! 17/20
Chablis Grand Cru Les Clos 2005, Dauvissat - I have had this before but then it was from magnum. It is full on and rich, drinking really well now, it has a bit of oiliness to it and very real Chablis ripeness. A keeper? I am not so sure but a lovely wine. 17.5-18/20

And then into the red 2001's:
Volnay 1er Cru Clos des Ducs 2001, d’Angerville - An element of softness, almost too mellow and easy, poised. Not too much depth  but very fine and good. May be the elegance that 2001 can give to the Cote de Nuits can be a little light for the Cote de Beaune, who knows. It was lovely but not that serious. 17/20.
Clos de la Roche Grand Cru 2001, Lignier-Michelot - My notes here are only really notable by their brevity, saying only "good, silky, rich & good". 17-17.5/20. 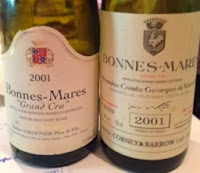 Bonnes Mares Grand Cru  2001, Groffier - The first of a Bonnes Mares pair that caused much discussion quite a lot of it based on bias (both ways). The Groffier was spectacular, very Pinot, extrovert even gregarious, open and full, ready and really quite sexy. One of the "real drink me now" bottles. 18/20
Bonnes Mares Grand Cru 2001, de Vogue - The vote showed that of the "Bonnes Mares for drinking now" Groffier got the nod (me included). The de Vogue had a saline edge (I love that, it's the Barolo man coming out) it was coiled up (for which read closed if you like), dense, taut even brooding, all there and serious. The potential is great (IMHO). Now 17.5/20 could be 18.5/20 easily. 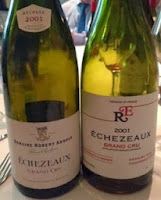 Echezeaux Grand Cru 2001, R.Arnoux - Quite dense and fragrant, red primary fruit, a dash jammy may be or just a bit hi-octane, tarty, good stuff if not massively serious. 17/20.
Echezeaux Grand Cru 2001, Engel - One of the wines of the night by consent, very fine, dense but never heavy, quite savoury or certainly finishers that way. It is in the second stage of development, a little browner and as above more savoury, not salty but nearly, moreish which is always a good sign. Really good. 18.5/20
Ruchottes Chambertin Grand Cru 2001, Rousseau - Gorgeous, soft and succulent but with real focus. Very fine, not overly rich, refreshing even, which takes some doing at this stage, does have a savoury edge but is at stage one, may be one and half of its life. You could drink a lot of it. Pretty special. 19/20
Clos Saint-Denis Grand Cru 2001, Dujac - A very interesting selection alongside the Rousseau. This was more dense, had more volume, quite rich, higher-toned, succulent, almost purple fruit, delicious and a treat any day but not with the refinement and class of the Rousseau, a sexy bottle of wine. 18-18.25/20.
Charmes Chambertin Grand Cru 2001, Dugat-Py - Checked and then not tasted. Not in good shape. 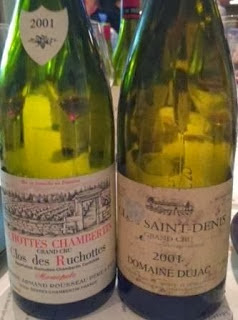 The really brilliant food was as below. It is a very generous kitchen, they don't just over load you with food, there is finesse, but they also don't leave you hungry and needing bread. A great restaurant. You should Go!

Saddle of Hare, Hot Pot for the table, Brussel Sprouts and smoked bacon

Many thanks to Mr H our host and organiser!