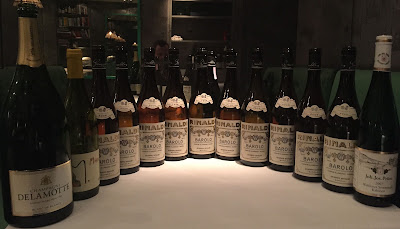 There is a sort of sibling feeling to this particular evening in the form of this - Brunate - Le Coste vertical. In reality this tasting was planned first and the other evening queue barged. We were 8 people, Eric (who had done all the hard work) myself and six wine lovers. The venue was a repeat - Medlar Restaurant. Chris Delalonde and the team doing a great job as ever. The upstaors room there is a real asset 6-12 people with lots of space.

Champagne to commence as we all assembled. Delamotte Blanc de Blancs NV En Magnum was a terrific start…this magnum having been disgorged in 2014. There is a easiness but also a freshness, good purity and just elegant drinkability about it. 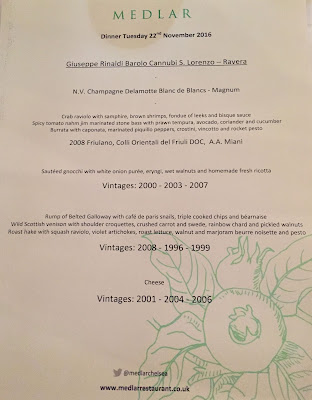 The menu was a nice compact choice, as above, I went as below:

We actually started the dinner with a white of Eric's. I have had Miani a few times and it has to be one of the great whites of Italy.

Miani Friulano 2008 - A cracking wine. I think if I were to have had to guess blind then I may have been in serious dry white Bordeaux country. There is a lovely waxy texture and a nose of dried gym socks (one's own socks before this is seen as negative!). The fruit is more yellow than white. Mellow maturity but no lack of drive. Spot on now.

And so, it was time for the meat and drink of the evening. This wine is a blend of two vineyards - Cannubi San Lorenzo and Ravera made from 1993 to 2009. From 2010 it is essentially called Tre Tini as it now includes some Le Coste from what was the Brunate-Le Coste before there was a ban on more than one Cru name appearing on any label (see the other post for a little more info here). For better pics and some data on the wines do see Ken Vastola's site Finewinegeek - Rinaldi. All these Barolos (excepting the 1961) wines were opened around 3pm and gently double decanted at 5.30. The flights are more in vintage style that pure age range, this seems to work better - especially, in my view, for wines from Piedmont and Burgundy.

2000 – This had a very heady initial richness that quite quickly degraded into a bruised nature. There was a little mushroom quality, some iodine and smelling salts. The shame was that the palate had none to the quirky (not necessarily positively so) nature of the nose. It faded quite quickly. I’d be intrigued to try again.

2003 – A good surprise here, good richly intense red cherry fruit and good energy, no sense of the heat other than in a good depth. A good, quite bold structure with good grip. There is a slight lushness but this is kept in check on the palate. A good wine that is starting to peak.

2007 – As with the 2003 this was a good surprise. The fruit character was again around the red cherry area but with more vigour and freshness. This has a good future, I don’t think it will close down, it is what it is and is all the nicer for it. A good wine with which to introduce someone to this estate. Very consistent with other bottles I have had.

2008 – I keep my love of 2008 as an underrated Barolo Vintage very badly hidden. It is a cracking year, it might not have the verve and all-rounder status of 2004 and 2010 or the uncompromising nature of the 2006s but it has typicity and charm in spades! This wine has a persistent tenderness, the fruit combines red and black with saline and earth, very Nebbiolo. It is a wine that is very balanced, very happy in it's skin. A long future and an elegant one. If you see it, buy it, but dont miss out on trying a bottle soon.

1996 – I find 1996 in Europe almost always has a strictness, an acidity and a sternness, not necessarily a mean nature but certainly a lean one. This is no different. The nose has a slight tar and toffee character and whilst the feel of the wine on the palate is true enough there is a lack of fruit. It may well makes great “old bones” as they say  but the contrast in lack of charm with the 2008 is stark. May be I am being harsh.

1999 – Was a very good example of classically proportioned Barolo, in third gear maturity-wise, some brown fruits and degradation to go with enough deep red fruit. Saline and frazzles come through. Not a waste to drink now but no rush. Good good wine.

2004 – This was always going to have a task on its hands to come close to the Brunate - Le Coste 2004 of the previous tasting. It was very good, nice vigour and drive – good young red fruits with some black in the background. Very well balanced, still primary, “splendid” appears a few times in my notes. I’d be sitting tight for 5 years before trying this again. Just as it should be. V.nice!

2005 – Saline and dark cherry, a really odd note (not negatively so) of cool sausage meat. I have found wet raw steak a useful note at times. Good acidity and a good wine, simpler than the 2004 but almost equally enjoyable on this night. Not to be overlooked.

2006 – A deeper wine, a more savoury wine too, a line to the 1999 possibly? There is a sense of leather and tobacco and tar, not a fruit wine, there are hints to the Monfortino style. Properly uncompromising and all the better for it. Splendid.


2009 – It was good to have this here as it is almost the polar opposite of the 2006. Fruit and red fruit at that, juicy, lighter, fresher. I think this is a nicely tender and unpretentious portrayal of a tricky vintage. There is an easiness about the wine. Leafy and fresh.


Once you're in the the flow of things...

Wehlener Sonnenuhr Kabinet 2007 – Eric had brought this along as a refresher and it worked well. I remember “demolishing” a case of Prum’s Graacher Himmelreich Kabinet 2007 some years ago – it seemed to almost drink itself! This was the same, extrovert but fresh…delicious

Barolo 1961 Rinaldi – It was very generous of Edward to have brought this along. An amazing bottle before you even get onto the contents, 720ml and hand blown, extraordinarily heavy. The wine was fully mature as you’d expect, rich but ferrous with a iron and stones feel, the texture carried the wine. There was a sense of fruit rather than fruit itself. Fascinating. A wine from another era!

And that was that...with these two tastings done I feel I know the estate and the wines better. I will continue to buy them and to drink them whenever I can. I feel the younger vintages (2007 onwards) will last and age well but ceratinly repay exploration early as the balance is superb! For instance a bottle of this wine from 2011 recently was gloriusly vigourous.

Keep up the good work Beppe and family!