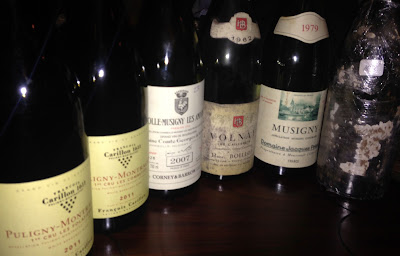 This was a fun Friday night dinner at 67 Pall Mall, the wine club I've joined. Great glasses, good service and decent food mean that I imagine more and more blogs will be coming from there. It's featured already on the DJP blog. The evening was to introduce two great wine lovers - Jordi and Rajiv - to  each other, it was terrific that Neal Martin could join so it became four members and six bottles and lots of chat. 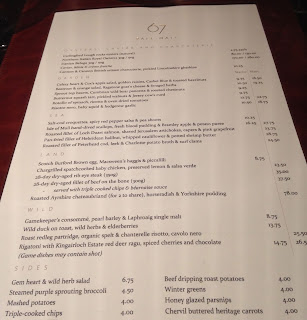 We started with a pair of whites that I brought along, knowing that I wouldn't be able to compete with the  maturity of the reds. The pair were:

Puligny-Montrachet 1er Cru Les Combettes 2011 and Puligny-Montrachet 1er Cru Les Folatieres 2011 both from Francois Carillon. This was the second vintage of Francois' estate. I chose the 2011's over the 2010's or 2012's as they are more open and just lovely to drink now. Interestingly the Folatieres seemed to slightly steel the show. The Combettes was more opulent and "tarty" initially but possibly a little simpler. The Folatieres, in contrast, was a little leaner, more saline, classier, very balanced. Will be interesting to track these over time. 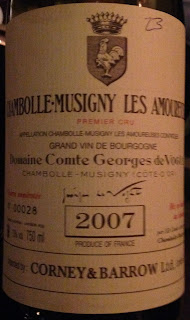 So, onto the reds, Chambolle-Musigny 1er Cru Les Amoureuses 2007 from De Vogue was up first courtesy of Rajiv. We felt it would need the most air so we wanted to get it in the glasses first. I love 2007's as I have said many times. This though is a more serious interpretation of the vintage. There is quite a lot of body here and a richer texture, the nose is more refined and 07' like, a little orange peel. It is a wine to be patient with as was shown by coming back to it at the end of the night when it had softened a little.

We were then firmly into the "Jordi-Zone" with the mature bottles of which there were, very generously, three. First up was Volnay 1er Cru Les Caillerets 1962 from H.Boillot. The nose here was degraded and sweet, opulent, with a whiff of green spices. The sweetness stayed and the texture added to this somehow. Often wines like this have a flattering opening and then turn savoury of even bitter, not so here, just a lovely fully mature bottle of sweet, floral, Volnay.

Musigny Grand Cru 1979 from Domaine Jacques Prieur was next and given that I am getting to know the Domaine Jacques Prieur (DJP) wines more and more this was an exciting prospect. The siting of the DJP Musigny is something I commented upon in this post. None of the older Burgundies were decanted, just popped and poured. The nose here was initially quite reticent and the texture a little nervous but all this settled down and ultimately this was voted WOTN. There was a masculine purity but also a refined saline edge as well, this made for both intensity and moreishness. A little spice and funk by the very end, all in all a cracking bottle of proper mature Burgundy. 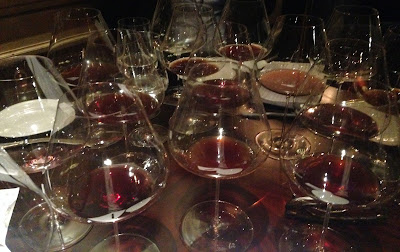 Then Jordi decided we needed one more bottle, no arguments of course, Vosne-Romanee 1er Cru Beaumonts 1989 from Leroy it turned out to be. This was rich, full of iron and minerals, there was an intensity to the colour that suggested it was far younger (mid or late 90's even), it had a showy, almost exuberant side. There is a spice too but never overpowering, a lovely wine that is, may be, 5-10 years from its peak...

This was a splendid evening with some great bottles being drunk amongst good chat in just the way I like it. Respectful but not deferential - these are made to be drunk. Having them from good glasses and served in small but regular pours does, of course, help.

I have a strong feeling this wont be the last time this little gathering occurs!