A meeting of "The Lads" – Ronaldinho, Chewy, Irish Peat, Halifax, Wattsy, Teardrop and Step-toe - was called to celebrate the birthdays of the first two mentioned. The venue was selected as No 1 Lombard Street and the brief was that the line-up, beautifully orchestrated by Halifax (aka Nobby), had to be top draw. Not a problem with this bunch.

As we gathered we started, post Peroni for some, with a magnum of Salon 1997, this was drinking superbly, nice focus but easy to enjoy, a dash of saline and citrus, no weighty biscuitiness which was not needed at this early stage. A cracking start.

The menu that lay ahead of us is below, with some pictures at the bottom of this blog.


The two birthday boys have probably drunk more Ramonet than other mere mortals so a trio from this great estate was our starting stalls: 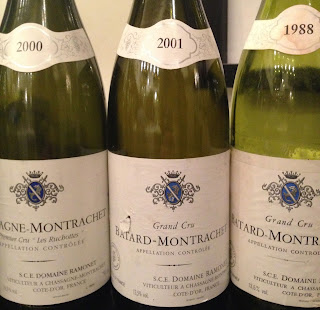 Chassagne-Montrachet 1er Cru Ruchottes 2000 - quite bold and opulent with richness and breadth. This struck me as a little more Meursaultesque than Chassagne-like but I think that is more the vintage than anything…nice wine.

Batard-Montrachet Grand Cru 2001 - slightly harsh to say so but this was the weak-link of the trio. It was not prem-oxed or anything but was looser than I think we expected. There was a striking note on the nose of fresh mint. It may be just suffered by comparison with the others.

Batard-Montrachet Grand Cru 1988 (2 bottles because, well it was rather splendid) - This was an absolute joy, stunning. My tasting starts with "feck me" it really was that good. Superb balance, sweetness, a shade of lovely reduction - simply excellent.

From Ramonet to Mugnier for the first brace of reds…which were served blind, leading to the usual abusive "you know nothing" exchanges that have become the particular forte of this wonderfully direct group - sensitive sorts need not apply!

As a pair these were beautiful wines, such lightness of touch and confidence required to turn out wines like this that will gain weight with age but are stunning now: 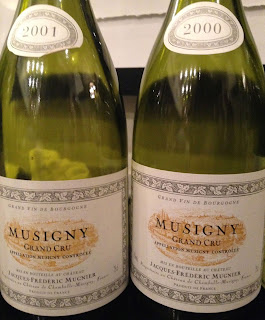 Musigny 2001 - this was one of those rare occasions where Nobby got things spot on by saying this was "ding-dong". Primary, red fruit, so pretty, roses, wild strawberries, really focussed but fruited too, delightful. Definitely want to have this again...

The quality of those wines took me straight back to the  Bonnes Mares 2008, Mugnier that I had 15 months ago in Chambolle-Musigny - a quality producer without doubt. On the topic of quality producers the second red Burgundy pair was from two rather special names - Rousseau & DRC.


Ruchottes Chambertin Grand Cru 1993 from Rousseau was incredibly youthful, very focussed with rich red fruits throughout, my scribblings have the word "lovely" about four times, I certain felt it showed more primary character than a 22 year old wine would normally, quality and poise, excellent.

La Tache 2000 from DRC was next, as we had this and the Rousseau side by side I think we all felt the Tache was the older wine. The texture was the odd thing, a little murky and bruised. There was acidity there and I liked the fruit character, which admittedly had nothing like the purity of the Rousseau. It was a odd showing for La Tache, lacking focus, I looked at my notes from the fairly recent La Tache "decades and decades" dinner tasting and there is some similarity. Anyhow, this group would never let a disappointing bottle change the mood. The next pair, of magnums, quickly had smiles all round. 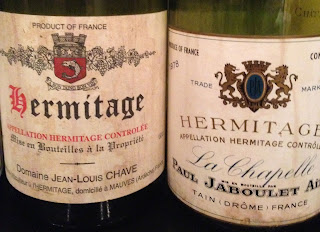 Hermitage 1990 from Chave was first up and was instantly a success, amazingly managing to combine meatiness with almost primary fruit, a dash of graphite but real energy. It's a good thing it was a magnum as there would have been a fight for more, a stunning wine. Several round the table saying it was a good few years behind the bottle format of this wine. Following that was always going to be tricky but Hermitage La Chapelle 1978 from Jaboulet had a damn good stab at it. It was at a different stage which was a superb contrast. Saline, iodine, some good grip and grunt, "pips and all" was a phrase someone used, there was lovely lack of compromise about this. Beef stock but good fruit too, a superb wine. As I write this I am two days away from heading to the Rhone -  a region I am loving more and more…these wines are amongst the very best reasons why.

We then hit a double "corked bottle" speed bump. Both Trotanoy 1982 and a magnum of

Figeac 1982 were corked -  a real shame. We had a brief squabble about whether you could taste "round" the cork but moved on swiftly and with good reason. A magnum of Margaux 1983 awaited. This is a wine I have long wished to have, something of a legend. There is a lovely lush texture and then a quiet extrovert, expressive character with a dash of spice, this is still youthful in magnum but is simply splendid. The expectation was high and it delivered. 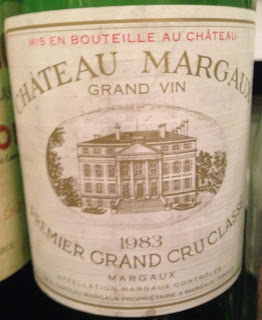 The next wine, which was served blind, will be amongst the most memorable of the year without any doubt. It was effortlessly complex on the palate. The nose was far less remarkable, a little neutral to me but apparently it smelt like a "rotting hedgerow" to one of our number. Either way (the polite version of "whatever") the palate somehow managed to combine; bovril, marmite, butter, pastry, Tarte Tatin, nuts and more. It was not bone dry by any stretch, I loved it. It was revealed as Rayas Blanc Doux Liquereux 1950 - Ronaldinho's birth year - special. Vouray Mouelleux Reserve 1976, Foreau was possibly more conventionally brilliant, smokey, briney, real richness, lovely, lovely wine. A very dry and hot year of course. I have reading (and hopefully drinking) to do on this producer. The wines quality was as marked as my ignorance of it. 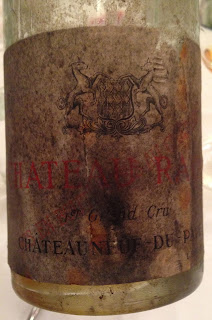 A Russell and McIver bottling of Cockburn 1955 followed and is a reminder, if we needed it, that mature Port is a category nobody should be forgetting about, this was long, precise and clean, not heavy, but full of gentle Christmas spices. A real highlighted even in this sort of company. 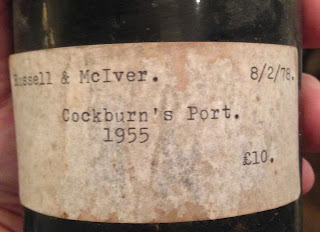 With the room, that we had sensibly been tucked away in, needed for dinner we were politely moved to the bar area where a couple of "glamourous super-subs" were opened: 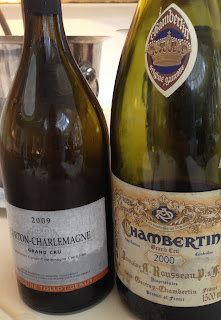 The Corton-Charlemagne Grand Cru 2009, Tollot-Beaut reminded Nobby of "Egg Custard" or may be he was just pining for his train back ooop norf. It was broad and good, nicely savoury to balance the ripeness of 2009. It did slightly struggle for attention with a magnum of Chambertin Grand Cru 2000 from that chap Rousseau. The Chambertin, unsurprisingly, was superb, rich, balancing sweet fruit, saline and savoury seriousness perfectly…

And with that the box marked "Mission accomplished" could be firmly ticked…great bottles, great people, great abuse…who's birthday next?