This is the first of three posts from the biennial meeting of the various Domaine de la Romanee-Conti agents from round the world. On the second morning we tasted the 2012's from bottle with 1 hour in the glass before tasting.

Domaine de la Romanee-Conti 2012’s
I have not commented on the colours here for two reasons, I am not good at it and in all honesty I do not feel it tells you a great deal at this stage.

My over-riding impression is of wines with a wonderful balance of fruit density and proper/serious structure, I imagine the vast majority will close down a fair bit in the next 2-3 years, this appears to me to be a vintage for the long term, like the 2010’s. While there will be charm early I think these wines need and demand time (more so than 2007, 2009 and 2011 for instance). 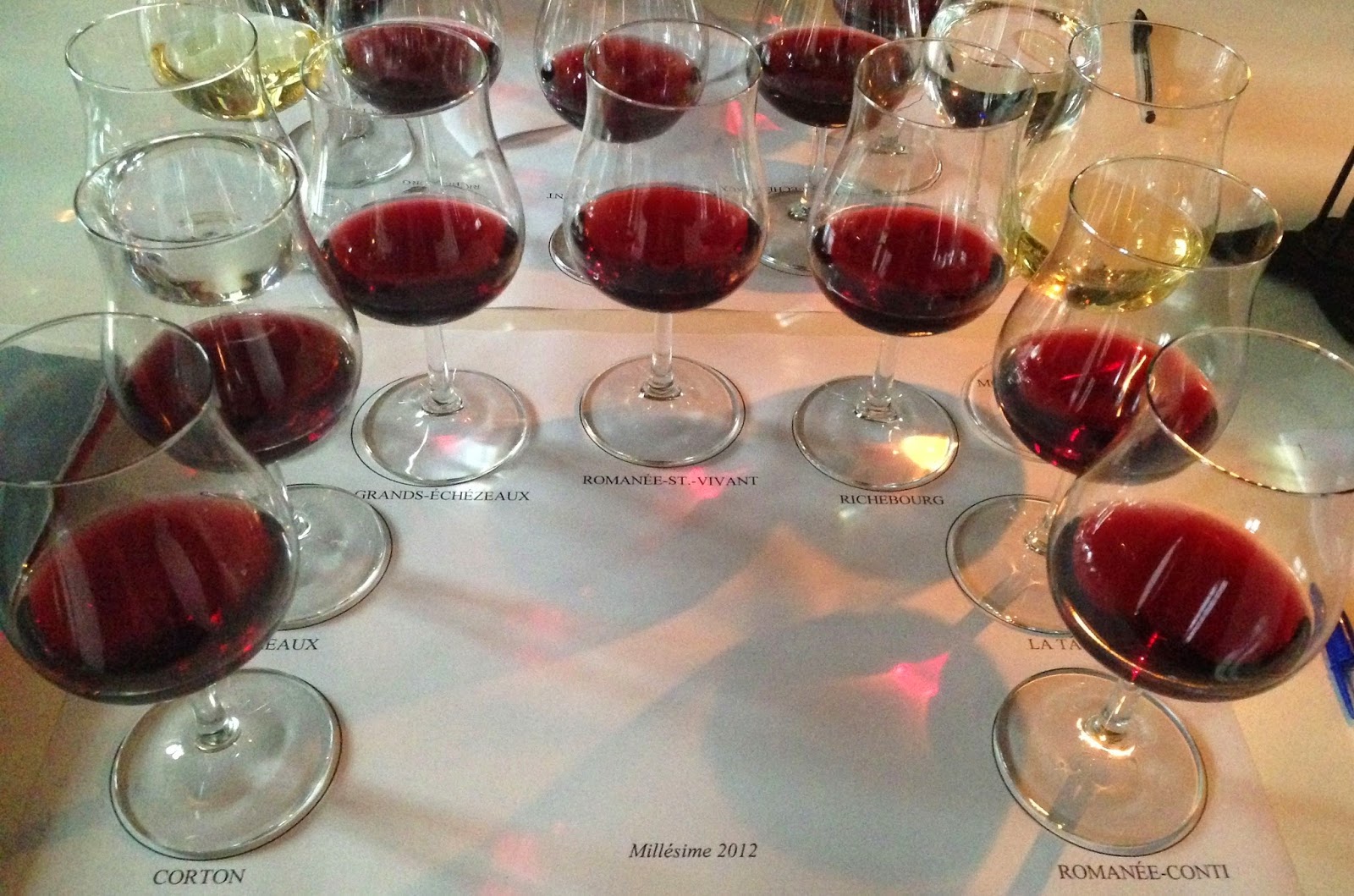 No Vosne-Romanee 1er Cru “Duvault-Blochet” was made in 2012 (nor in 2013). You may think given the name of this blog that this would be a disappointment but in honesty I like that it is not made each year. One day I would love to sit down and taste them all...

Corton
Charming, quite dark fruit, the nose is true to Corton but with charm. You can feel the whole bunch vinification. The palate at this stage does not have the density, nor depth, of fruit that you get from the nose. There is good grip but it is not overpowering. Complexity will come with time for sure.
On re-visiting at the end of the tasting and with more air the forest fruits were coming out.
Score: 17-17.5
Drink: 2020-2030

Echezeaux
A shade reductive, which I like, lovely "complete" nose with an earthy element, multidimensional. There is fruit and as usual for the Domaine's Echezeaux it is red, it releases more and more with the air and swirling. The palate is red fruited also, more delicately but it grows. There is a good structure, not harsh but definite, very grown-up. I like this a lot, a very good Echezeaux.
On re-visiting at the end of the tasting and with more air it became more decadent and of course less reductive, the fruit is ever so slightly degraded, real complexity – I’m very impressed.
score:18.5+
drink: 2021-2034+

Grands Echezeaux
Less animal and more primary than Echezeaux in character, though less expressive, may be the most muted of all the wines in this tasting. Very complete, quite brooding and serious, alluring and academic.
On re-visiting at the end of the tasting and with more air it made me think that this will go more to the savoury end of the spectrum in time.
score: 18 – 18+
drink: 2022-2032+

Romanee-Saint-Vivant
I seem to love this wine more every year. I also feel the purity of fruit character is the closest to that of Romanee-Conti itself. Mellow yet precise red fruits hit you. There is a light freshness of orange peel as well. Easier to assess and easier to love than Grands Echezeaux. To counter the red fruit there is a gentle white pepper spice that I often find in Romanee-Saint-Vivant, it never overpowers but always balances the fruit. Very poised and attractive on the nose. It is though the seriousness of the palate that I think really marks the outstanding quality of this wine. Whilst the nose makes you flirt with it the palate makes you sit up and pay attention. There is a depth of minerality on the palate that lifts the complexity of the wine and makes it so moreish, a persistent and fine structure here that almost goes unnoticed but is there as a serious frame to the lovely fruit. As might be obvious I have really rather “fallen” for this wine.
On re-visiting I was delighted to have all the above confirmed, this is a superb Romanee-Saint-Vivant – seriousness to balance the attractiveness.
score: 18.5 – 19
drink: 2022-2035++

Richebourg
Tasting and reveling in the differences between Romanee-Saint-Vivant and Richebourg is one of the greatest parts of any tasting with the Domaine’s wines. Darker-fruit, more cherried and with some damson there is a certainty about Richebourg a rugged confidence, just short of swagger and so it is here. The palate shows a little less weight of fruit than the nose, not quite so brooding, more charm. The structure is clear but ripe.
On revisiting I found the biggest difference of all the wines, some animal a little graphite and cool savoury minerality as well as a good structure, may be the sleeper?
score: 18 - 18.5+
drink: 2024 – 2036++

La Tache
I got a tiny note of “grain” or as I noted, popcorn “unpopped”, immediately the glass was swirled it went. La Tache is so often the “confident senior sibling” and so it was here. The glass that was most empty at the end of the tasting. I find this often the hardest to describe but then tend to waffle. There is an earthy power, some links to Echezeaux here, that is very La Tache, this is expressively complex, more “sharp minded Bon Viveur” less the “intense academic”…There is a lovely structure a little mouthwatering dryness that leads to a dash of pepper, pink not white, herbs and gentle spice. With more air it gets more complete and harder to describe, this is a serious La Tache for the long term but as ever it is also charming and welcoming.
On re-visiting the above was just confirmed.
score: 18.5-19+
drink: 2022-2036+

Romanee Conti
The lift of fruited excellence that you see in Romanee-Saint-Vivant with some of the earthy complexity in the background that was evident in Echezeaux and La Tache, lovely. A striking balance of black and red fruits, powerful and brooding yet not too closed or too tense. This is serious, a keeper. There is sweetness but it is kept in check with a persistent and definite, if lightly worn, structure. To say the integration of the fruit, structure and texture is perfect is too technical but so true.
On revisiting there is so much depth and complexity, near perfect.
score: 19.5+
drink: 2024-2040+

Le Montrachet
The colour is confusing as everything is there, flashes of green, yellow, gold even. Real power and almost a spritz of youth. There are notes of brine and lowland malt mixed with white flowers and yellow fruits that stop just short of the tropical. The palate is so lively, so driven and focused, as was commented there is an almost Corton-Charlemagne tension like, verve and drive to the attack then the tongue is left in no doubt that this is Montrachet. There is an impression of sweetness and a textural weight to come. My hand written notes finish with “Epic potential”. This may well be a legend…so sad that there is so little but may be that plays a part?
score: 19-20
drink: 2019 – 2032++
One additional observation:
Were I to pair the reds on the basis of similarities of overall character it would be easy to my mind:
Corton with Richebourg
Echezeaux with La Tache
Romanee-Saint-Vivant with Romanee-Conti

As always, a privilege to taste the whole line-up and even more so to do it in Vosne-Romanee itself.
Posted by Will Hargrove at 06:51