Zucca then Golf then... 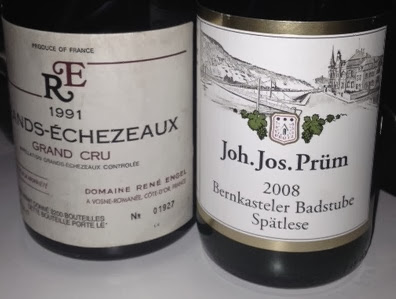 A slightly chaotic blog this one but a few memorable wines have been drunk so here we go.
Starting with a delicious dinner at Zucca with a great wine lover. Two good bottles were opened. A very nice, if still simple due to its age, bottle of Bernkasteler Badstube Spatlese 2008 from Prum and then a serious bottle in the form of Grands Echezeaux 1991 from Rene Engel. The Prum was decanted which is necessary at this early stage, still simple it had lovely ripeness and vitality, really wakes up the taste buds. There is a long life ahead for this, I would probably next look at it again in 3 years time. The Grands Echezeaux was really something, nothing like a wine of 22 years old in honesty. I would say this was just starting to hit the second phase of it's life, vibrant and complex but still with forceful fruit really beautiful. 1991's along with 1993's really are lovely. The Truffle pasta and then Mallard went brilliantly with these wines. 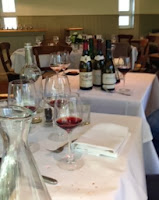 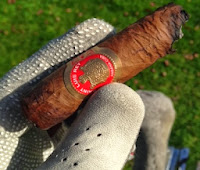 The following morning it was off to the Wildernesse Golf club in Sevenoaks for a round with friends as their guest. We got lucky with the weather and after a good front nine things sort of fell apart for me this meant it was cigar time. I got out a nice mellow, easy, morning Robusto - Saint Luis Rey Regios from 2012. The round was really enjoyable and after a quick beer we then ventured off to The Vine, also in Sevenoaks for some lunch. The food was spot on, all the dishes tasting delicious and working well with the wines. We hadn't really co-ordinated much and ended up with four reds. They were an interesting selection starting with Charmes Chambertin 2005 from Tortochot, not a producer I know at all. The wine was primary but not closed, clear and clean red fruit with a tiny bit of tannin. Many of the 2005's do appear to be showing more than was the case 6-12 months ago. This is a wine that will age well but I don't see it being an epic. Lovely, relatively simple and a nice drink. Next up was the oldest bottle of the day and both the most unique as well as interesting. Troplong Mondot 1962 is not something you see everyday. I have to admit to having a real mental block over this estate. I am, in polite terms, not a fan. I find the wines they make now to be a little monstrous in character and extraction and just not the sort of thing I like to drink. This though was very different, elegant and with red/black fruit, poured straight from the bottle it drank well immediately and over the next 30 minutes, much longer and it might have faded but it was both fascinating and impressive for a vintage that is decent but not a patch on it's predecessor. The last two reds were both red Hermitage. The first Hermitage 2008 from Tardieu-Laurent, this was my offering and before you think why such a young Hermitage? I'll explain. In 2008 the plot that this wine was from was harvested even later than Chave and the elegance of the wine really impressed me recently so I thought it was time to re-visit and share it. It showed well, very primary but with a lovely feminine red fruit in amongst the more "butch" darkness, it was good but then I was somewhat trumped by the next wine! Hermitage 1998, Chave. Absolutely delicious, only really getting into 3rd gear but very easy to appreciate. I love the wine at this stage because it was mellow but is in now way either primary or older, just in a zone of loveliness, really superb. So two young wines that showed well and two more mature examples that were delicious, you can't ask for much more than that. 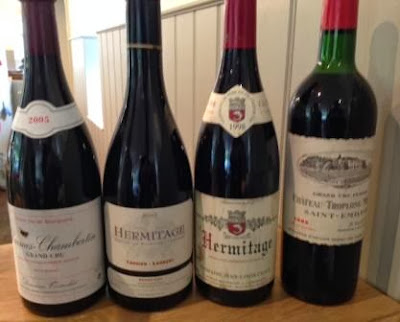 After a couple of days of normality it was time for another wine merchant friend to come over. This just means more bottles to open! We started with Hattenheimer Pfaffenberg Riesling Spatlese Jubilee Label 2009 from Schloss Schonborn which is a wine I have followed for some time as I think it offers stunning value and lovely richness. This showing did not disappoint. I am trying desperately to leave some for a little while but not managing it very well at the moment. The next bottle was infanticide, Chablis Grand Cru Les Preuses by Nathalie & Giles Fevre, even decanted it didn't give a way a great deal but did have a lovely texture and was very try to Chablis I just kind of wish I hadn't opened it. On to red and a wine I know very well, Barbera Cerretta 2008 from Giacomo Conterno which was great with Mrs H's brilliant, if labour intensive, chicken pie. It just has guts as well as elegance and fruit, tricky combination to pull off. We then went onto one last bottle and I have to say I was really impressed. The wine in question was Slowhand Pinot Noir 2009 from Muddy Water in Waipara, NZ. The clarity of the red - strawberry and raspberry but in no way bitter - was staggering, not far off the kind of character you get from Felton Road. I will certainly be having more of that! 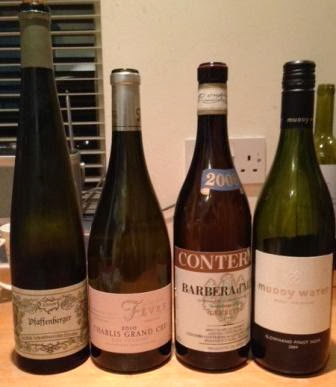