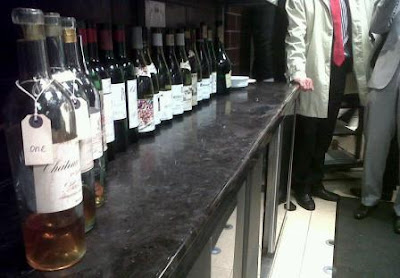 Given some of the truly memorable lunches and dinners that I have been lucky enough to go to and the fact that I am only 35 it may seem a little premature to say the below was one of the great lunches of my life but frankly it just was and I am confident it will remain that way. I have been trying to think of how to write it up. There was just so much good food and truly exceptional wine over the nearly 6 hours that it would become tedious or worse arrogant to write it as one great long meal. I think I will do the food then the wines. The menu was selected by "Newcastle" who had done a lot of work on it and provided all the wines. To say this meal was ALL down to him is totally correct and is something I am very grateful for. So the food:
To start Pressed foie gras with peppered Madeira jelly, smoked duck, Peach & almond crumble...you can see this with the Prums...simply delicious and in the best of proportions. 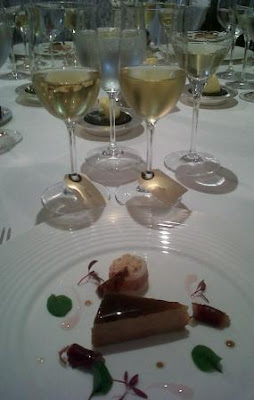 Up next was Stuffed pig’s trotter with veal sweetbread, parsley, Dijon mustard, warm apple sauce & ‘Waldorf salad’ with reds, don't panic we went back to whites which was a great tactic for a long meal, one for the note book. This was simply amazing, I am not going to describe it as I am too greedy with great food to make notes but it was spot on! Then back to whites we had one of the extreme highs - Fillet of turbot with truffle linguine, Scottish langoustine & cep - which for a bit of an Italianophile like me was stunning, a bit of everything in the dish...with the dry, and German, whites behind us we were into carnivore territory, Roasted grouse, foie gras, savoy cabbage, girolles, liver pâté & bread sauce the wines (two burgs and another wine as below) with this course were fascinatingly diverse and therefore I paid slightly less attention to the food...I can't say that for the next course which was brilliant, very traditional and simple, all the better for it, the sight of several of us gnawing on the bones must have been amusing, the full dish was - Côte de Boeuf, bone marrow, sauce choron and red wine jus from here it was - Selection of cheeses - to mop up the brilliant reds and get started on the Port. I have to say I am not always a fan of cheeses in the middle of a marathon meal but this worked. A brief interlude to wipe the palate came in the form of - Green apple, basil & lime sorbet & wild strawberries - before the Sauternes came along with a brilliant - Caramelised Tarte Tartin of apples with vanilla ice cream - that was the sort of pudding you could eat until you're ill.
So with the food described what about the wines? We started with a magnum of 1995 Comtes de Champagne Blanc de Blancs Tattinger, I had never had this vintage before, my only comparison is Salon 1995 that I know pretty well, I am a fan of the 1995's they aren't the 1996's in classicism but have a wonderful apply acidity and freshness, I really enjoyed this perfect apertif.
A pair of Prums followed - 1982 & 1983 Wehlener Sonnenuhr Riesling Auslese Goldkapsel - we had all the wines after the Champagne blind. Both of these two were in great condition and tasting younger than they are. I think my thoughts were that the 1983 was a Auslese GK and the 1982 was a straight Auslese or even Spatlese. In age I had the 1982 as being 5 years older than the 1983. I am happy with these guesses as it is, at least, logical. The 1982 was wonderful, slightly drier and a dash more tangy, but the 1983 was magnificent - the best Riesling I have ever had - everything you wanted from the Mosel and with decades ahead of it. There was a theme that happily went on through the whole meal here...all the bottles absolutely sang, a rarity.
We went to red now for the first time with a trio of wines in Burgundy glasses - 2002 Romanée-Saint-Vivant Grand Cru, DRC, 1990 Clos de la Roche Grand Cru, Dujac & 1955 Barolo Riserva Monfortino, Giacomo Conterno - The first two were clearly red Burgs and I was relieved to call the Monfortino as Barolo, I went for a second tier producer (wrong!) and a wine from the 1960's may be '64 or '67, good enough for me. In fairness if you have had old Nebbiolo then it was not hard to spot, it was also almost orange really really interesting, I loved it. The two Burgs were much harder, I had their ages way out thinking the 2002 was more like a 1990 and the 1990 more mature still. Also if I had to spot one of them as DRC wine then I would have gone with the 1990. They were both very good and clearly Grand Cru. I do find that 2002 reds in general are more prone to the farmyardy style and more "degraded" than many other vintages of 9 years old tend to be, this is not to say they have aged prematurely as the intensity is there they are just far more like that. The opposite of the less serious but brilliantly precise and youthful 2001's. The 1990 was a serious wine, impresive.
We are now staying with Burgundy but moving to the white side of things with - 1996 Meursault Perrières 1er cru, J-F Coche-Dury, 1996 Meursault Perrières 1er cru, Comtes Lafon & 1988 Montrachet Grand Cru, Domaine Ramonet - this was a fascinating trio. The best showing I have ever witnessed by a Lafon, I've just been a bit unlucky over the years. The Coche was brilliant, isn't it always (?), although it was suggested by others not to be as good a bottle as we'd had previously but only by a fraction if at all. The Montrachet had an amazing almost Botrytis nose that I've often found in my fairly limited Montrachet experience, it appears to come from the fact that Montrachet is often very late picked, a dash of overripeness. The acidity was good on it though and staggering to think it is 23 years old. We had these blind and my guess was that they were all Grand Cru, they certainly had the quality, - one Chevalier one Batard and one Bienvenues Batard - or such like, age wise I was early 1990's so 1990 or 1992 as they were clearly from a fine vintage. I kept my glass of Montrachet and it got better and better. 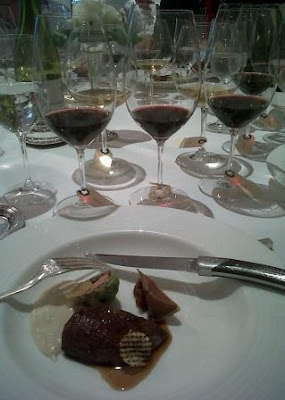 The next pair were Rhones and Guigal's at that - 1998 Côte Rôtie ‘La Turque’ &
1996 Côte Rôtie ‘La Landonne’ - These were on cracking form and I nearly made a mistake I have made before but stopped myself and said Rhone. The mistake is that there is something in the oak used by Guigal on these top wines that always makes me think of Haut Brion, anyway know that I know it can be quite helpful because when I think it is one or the other you can quickly tell which from the texture these are undeniably great and impressive wines, I am not sure if they are totally my thing but I have limited experience and there is (or should be) a place in every top cellar for this style and character. Very youthful even at 13 and 15 years of age, almost primary.
The next four wines I think have to have formed the best quad of mature Bordeaux I have ever had in one sitting - 1970 Château Petrus, 1966 Château Lafeur, 1964 Château Latour, & 1955 Château Mouton Rothschild - The Petrus was in some way the odd one out it was youthful, funky, almost tropical in character a truly remarkable bottle but somehow less Bordelais that the others. The Lafleur was exquisite in every way...perfect Pomerol at a perfect stage in its evolution. The Latour was just so Latour and I love it for it...very Pauillac, ultra classical and better than it should have been and then for the Mouton 1955. It was very well pointed out around the table that when Mouton was made a first growth (1973) this was the sort of wine that the decision would have been judged on and I can see why the upgrade came. It was vibrant, fresh, almost with that mint element still there, rich but not heavy a masterpiece. I have to mention the vintage now as I have has several 1955's recently - Trotanoy, Haut Brion amongst them - it is a seriously good and reliable vintage and the sort of year that makes me wonder what the Bordeaux of today will taste like in 56 years time.
A bottle port- 1983 Quinta do Noval Nacional - was an impromptu addition. I have never had Nacional before and as port was what first got me into wine, simple names and not many vintages, I was excited. With the taste buds waning a bit I made a strong mental note to remember this, it was supremely good, rich but balanced young but so ready as well as having years ahead of it...I must drink more port! It's a steal after all.

The final three wines were - 1947 Château Climens, 1938 Château d’Yquem & 1935 Château Filhot - a specialist subject of our host and a growing interest of mine hence next blog on 2009 Sauternes. I was a little past note making but loved them all. I made two mental observations. Firstly, that the Filhot was amazingly good and far bolder than I could imagine their wines now becoming as them seem to have gone for a lighter style now, not that this was heavy but it was intense. Secondly, that it was hard to tell which of the other two was Yquem which is normally relatively easy. Having had a few Climes now 1971 and 2001 amongst them there is no doubt that Climens is staggeringly good. All this has to be put in context though with '47 a great vintage and '35 less so and '38 even less so.
A truly exception lunch was over but not before we met the chef and saw the full line up in the Kitchen. The service and style of the whole team at Royal Hospital Road was superb. I am sure that I write for all the guests (Halifax and Suffolk featured her as before), we were 7 in total, when I say thank again to Newcastle for his generosity and organisation...the only problem now is whatever next?!?! A good problem...