Solaia @ Massimo's thanks to "Sussex" 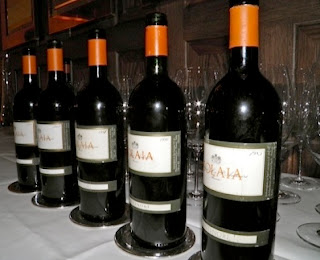 Sussex (referred to in other posts) decided very generously - he supplied almost all the wines with a couple of bottles from the UK agents - that a Solaia Verticle at Massimos (pictured below) was a good idea. You won't find me disagreeing with that. For several reasons; I've very little experience of the wine, that is a fair sized omission for an Italian-wine-ophile, several of the people going are good buddies and thir 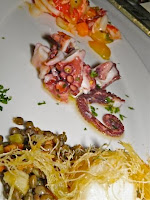 dly I've not been to Massimo's before despite several people saying I should.

The evening started, as is only sensible!!, with a Jero of

Krug Grand Cuvee. But not just any Jero, this one was signed by Olivier Krug. It was still quite taut very good for getting the hunger going but will still improve, youthful but very Krug. This was served with a selection of Mixed Crudo, all delicious. We then had the first of two Italian whites an oaked but balanced and good 2009 Miani Banel Sauvignon Blanc, it had good dose of freshness but also a waxy element. The second white was, richer but not with the desired freshness, a 2008 Jermann IGT Were Dreams. Interesting but no more than that. The two whites were served with Lobster with cherry tomato salad Crispy scallops with lentils and delicious Octopus. 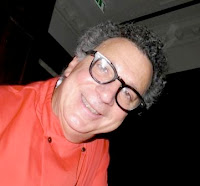 We then moved on to Pasta with Ragu and the first flight of Solaia’s – 1990, 1997 & 2004 – The 1990 was a little funky, sweaty and a little bricky a good bit of proper Italian decay but then actually went t Bovril aromas a little too quickly. It may well have been great straight out the bottle but the more air it saw the more it lost any fruit. The 1997 was one of the two wines on the night that was a little closed and angular but that did improve in glass (the 1996 being the other), I liked this without there being any major wow factor. The 2004 (from magnum) was a very proper wine, quite decadent and lush but also tightly structured, a bit of green pepper, very Cabernet…impressive 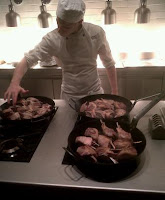 With the delicious secondi Piatti - Rack of Lamb (see right) with spicy fregola, chickpeas and passion fruit sauce – we then had the 1994 & 1996 – the 1994 was the most pleasant surprise of the evening and apparently is a wine Piero Antinori often uses when showing off the estate. It had superb balance, was really moreish, complex and at a lovely stage. The 1996 was, as mentioned above, a little more taut but it did over time give more aroma away, it was the one wine that really needed the decanting.

The last trio was 1978, 1982 & 1985 with cheese. The 1978 was the one wine of the night that had elements of tertiary character, it had a more Burgundian feel (relatively speaking), very balanced and elegant. The 1982 was disappointing, a slightly strange confected nose of almost marshmallowiness and then a dried out finish, this is a little too negative but against the 78 and 85 this was the lesser wine. The 1985 was interesting as there were two bottles but one very much better that the other, luckily I had the better one and it was lovely it had a weird note of almost toffee without being sweet, good length and very slick, not quite the balance of the 1978 but very good. 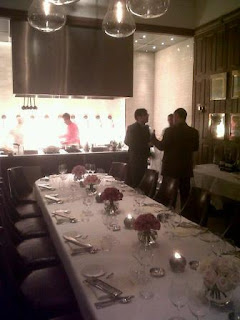 The overall feeling in the room was that the 1978 was the pick and the 2004 had great potential. I love the 1994 for its balance and would love to try the 1985 again. My overall feeling on Solaia from this one tasting (that is not enough for a definite view) is that it is a very good wine but not necessarily a great one.

I haven’t majored on the food or venue but both were excellent, the private room comes highly recommended as the cooking is all done in there against you.

Thanks again to “sussex”