Monday at The Square.... 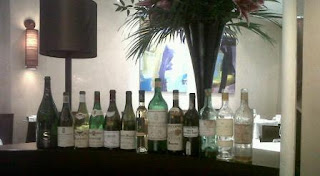 Back in November I wrote up an amazing tasting/dinner at the Devonshire Arms Hotel, a truly legendary line up was assembled. I hadn't thought anything remotely so good would come round again but...on monday myself and three others assembled as guests of a very kind customer to drink and eat at the renowned "Square" (www.squarerestaurant.com). 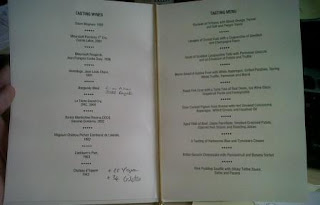 The food (from the tasting menu with one or two tweaks) was sublime and service excellent but this is all about the wines...before we were seated at the table we had a magnum of..

Salon 1988 - Up north we had had the '88 from bottle and it was the star Champagne of the night. This was, as you'd expect a bit tighter and more mineral and had a lemon freshness, really good and so clean as always with Salon...a great start.

From there we were on to two white Burgundies, one of my favourite wine types and both from Meursault and both from superb producers. Meursault-Perrières 1er Cru 2001, Lafon - this was a little muscular especially for a 2001, quite broad and savoury, very good but it struggled alongside what is an early contender for white wine of the year - Meursault Rougeots 1er Cru 1996, Coche-Dury - this was such a complete wine, a nose of flint and "struck match" then brilliant fruit but all with good acidity and a brilliant finish. There are plenty of examples of expensive wines being more style over substance or over priced but with Coche-Dury (and it is not cheap at all) you really get the best. There is no such thing but if there was Meursault Grand Cru this is what it would taste like.


The next wine - Hermitage 1991, JL Chave - was served on its own (as in with no other wine, there was plenty of food!). I am something of a heathen when it comes to the Rhone. I like the wines with age for drinking but have never found tasting them young easy or fun. This was very savoury and masciline, I loved it. I would say it must be at, or approaching, it's peak but there are no signs of any decline...impressive

We were then back to Burgundy again La Tache 2000 this was a real treat. I get to taste DRC more regularly than most (working for the agent has it's major advantages!) but actually drinking bottles is very rare. I think people believe DRC needs ages to mature but this is, in my opinion, not the case, the wines age amazingly but are almost always accessible in youth as well. The nose on this La Tache was a touch closed but soon opened up to reveal a wonderfully complex palate...it is still a "puppy" but bloody good now, if I had any i would look again in 3-4years. So having had one corked bottle a replacement was sought - Chambolle-Musigny Les Amoureuses 1er Cru 2002, Roumier -this was still primary in it's fruit and very fresh a classy bottle with a lot more to come. I find some 2002's have already started to attractively (and a bit prematurly in places) degrade but this was not like that.

Bordeaux was up next - 1982 Pichon Lalande (Mag) - I have not had this in magnum before but I would say it is the perfect format for this wine now, I found it to be on great form, at a lovely stage in it eveolution, great fruit but also maturity, really good claret!


I had wanted to take a bottle along and I selected - 2002 Monfortino Barolo, G.Conterno - on the basis that it would be interesting and different to the others. I decanted it in the morning at 8am and then back into bottle. It showed well but needs even longer decanting than I managed, there is real grace here and power but more a power of density than concentration - more young Grand Cru Burgundy than young Cote Rotie for instance. It will outlive me and is best left for now.

Our host has a real soft spot for Sauternes so this is where we went next with a wine I have never had before and may well never have again - Yquem 1943 - it was decanted briefly before serving and was at stage I love, honeyed and toffeed with a tart freshness on the finish, real creme brulee flavours. We then went to 1934 Gilette & Yquem 1988 - I made no mental note of the Gilette other than that it was very good, more youthful in colour than the 1943. The Yquem 1988 was brilliant, I have not has the '88 before, the '89 and '90 steal the attention but the '88 is so fresh and balanced that in my opinion it is so near those other two vintages that it is something of a bargain.

The finale just before coffee was 1963 Cockburn which slightly lost out to the stunning Sauternes but it was youthful for a '63 which is a good sign. And so a lunch that started at 12.30 ended at 5.45 with a mad rush to a cab before the non Londoners missed their train northj, they made it! A wonderful day... 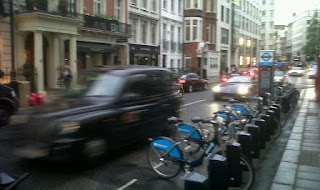