So a meeting of "The Lads" was called to celebrate Irish turning 50. The line up being Irish, Halifax, Ronaldinho, Woo, Monty (new name on account of hints dropped) and myself. We were sad to unavoidably lose the presence of Chewy but we drank to him and I am sure he'll be back with a bang next time.

This group is a joy. A few of the previous outings can be seen below, were I more IT savvy then maybe there would be a section of this site dedicated to the group...the same could be said of the May trips group.

The venue and co-ordination was chosen and orchestrated by Irish. Kitchen W8 is a great spot and one I have always enjoyed - if you've not been you must go. The brief was a simple one "bring a great bottle or two and NO meaningless volume". I tell you what, it worked as you'll see. But first the menu which was faultless - pics at bottom of this post.

So let's start at the beginning, Halifax (aka Nobby) is almost always in charge of the Champagne which is fine given he has good stocks and loves it BUT has the one downside of being served first, Nobby is almost always late! Only 15 minutes this time so having discussed the state of the world over a glass of water and got the first of Ron's dodgy jokes out the way we were on.


There was an element of "blindness" to almost all the wines. Louis Roederer 1988 from magnum was just splendid. We were on the money vintage wise having been in the 1988 to 1990 range but we were almost all leaning towards a Blanc de Blancs - Taittinger and Salon both being put forward. It was lemony with a little biscuitiness in the mix, no nuts, brioche and toast, great energy, delicious now, will age well but I can't imagine liking it more than right now! The magnum size had a positive effect without doubt. We were off and running in style 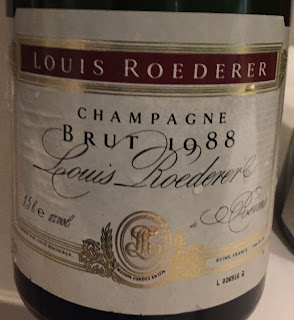 With one notable exception we went wine by wine rather than pairs which meant we could concentrate on getting things properly wrong. Meursault-Charmes 1er Cru 2002 from Lafon was up next and bang on the money. A little reduction, some petrol, good generosity, very good, focused but proper and perfect from now on, a taut density and easily of Grand Cru quality. 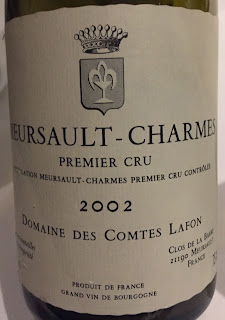 I decided to go early and get it wrong next, I said Grand Cru Chablis and from the mid-late 90s. I was, kind of, wrong for the right reasons but mainly because the wine was quite cool. It was a cracking bottle of Montrachet Grand Cru 2001 from Sauzet. Once up to temperature it was marmalade, tangerines, rich, with good minerality underneath and opulence (essential in Montrachet I'd say). Lanolin, iodine and full, those that kept a little in their glass just kept getting more and more...lovely. 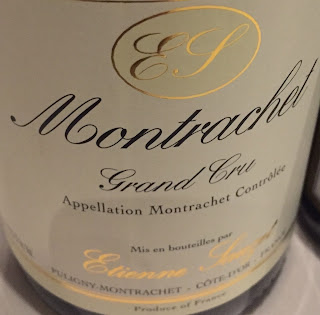 What came next was the - ludicrously generous - focal point, even in this company. First we had Hermitage La Chapelle 1990 then Hermitage La Chapelle 1978, both these bottles and the next one having come from the estate in original individual wooden cases last year. The 1990 was stinkingly rich on the nose, full, I noted that you could smell the viscosity, whether that is possible or not, I know what I mean, rich bacon fat, so sweet big and bold but balanced and digestible, almost raisined, some soy and aniseed. A brute but a dam good one, mightily good. The 1978 was by contrast all together gentler with a more tender sweet maturity, leaves, forest floor, strawberry leaf and then tea and wood smoke, a delight. A really balanced wine, Burgundian if anything...so poised. 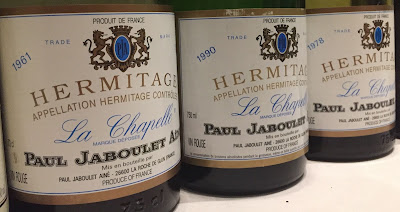 The Hermitage La Chapelle 1961 that followed managed to combine all the best bits of both these wines. It was perfect to have then in this order. Having a bottle of this in perfect shape is a dream come true. I was laughed down for suggesting that there was a time or mood when I would pick the 1978 over the 1961. I maintain there is, the 1961 has everything you could want. I just loved the tenderness of the 1978 as well. Looking back to the 1990 I see this as having the structure and DNA of the 1961 rather than the 1978, it has that incredibly rich sweetness. My note for the 1961 was easy to write; "Pine, resinous, oils, savage, a brut, wild, uber-concentrated degraded berry fruit, bovril and sweetness...super...wild, hickory smoke, grip...stunning...complete, Indian spices now, ferrous...magnificent!" 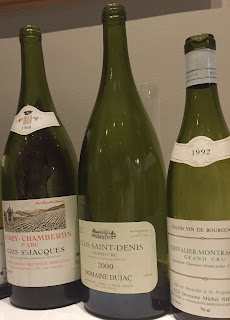 Where on earth do you go from that? Well one thing is for sure, you get the hell out of the Rhone...Burgundy it was and more specifically Clos Saint-Denis Grand Cru 2000, Dujac from magnum. I really enjoyed this and was pleased it was a magnum as it just begged to be drunk. Degraded sweet and feminine. Waxy with palma violets, and some tangerines rind. We were pretty rubbish trying to get this blind as we were in the 1980s mainly, it had an open knit maturity, attractively so. 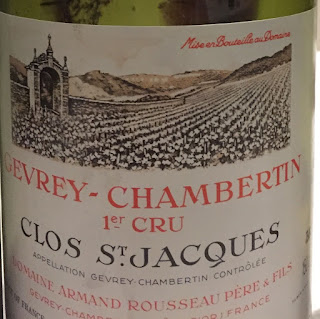 Another Burgundy mag next, any Rousseau wine is a treat and in magnum even more so -  Gevrey-Chambertin 1er Cru Clos St Jacques 1988 was everything you would want and expect. So good in fact that it blew a fuse in the restaurant. This was tightly coiled with red fruit power, poised and persistent and with stunning depth. None of the tougher, acidic nature you can get with 1988. Just a super super wine - a treat. A little bit more about Clos Saint.Jacques.

As cheese was ordered we went back to white and a crackingly interesting pair of whites. Firstly, Chevalier-Montrachet Grand Cru 1991 from Neillon, then the very same wine from the following year - Chevalier-Montrachet Grand Cru 1992, Neillon. The 1991 has absolutely no right to be this good, none at all. Oyster-shell and a tinge of green serious focus, spicy with a little nuttiness, some stemginger and a little lanolin, the definition of an over-performer. The 1992 was altogether richer and more decadent, a little reduced, unctuous and superb, spot on with the cheese, toffee apples and hedonistic maturity.

Just the perfect time now for a sugar lift. So where better than Yquem and the 1953 specifically. I've had very few 1953s but those I have had have usually been in verticals courtesy of Jordi. This had an expressive and fully mature nose, creme brulee with a slightly burnt topping. There is a rancio sweetness to this, lifted like PX sherry but then with a drier more intense middle, slightly burning caramel. 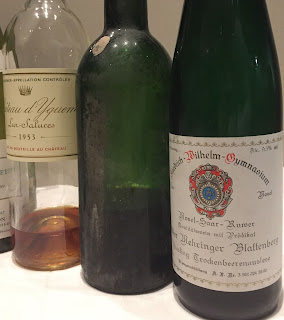 The next wine - Mehringer Blattenberg 1989er Trockenbeerenauslese from the wonderfully named Friedrich-Wilhelm-Gynasium - was an amazingly good contrast. So incredibly zippy and energetic, intense yet light as a feather, an amazing liquid. Lemon and even line freshness...superb.

Then the final bottle, fittingly a birth year wine for Irish - Taylor 1966 - which had been double decanted that morning. Marzipan and full raisined sweetness but a nice medium weight, it just got better and better with air...we had the predictable "why don't we drink more Port" conversation. With that and the sound of a hoover doing its business we managed to depart before anyone arrived for diner! 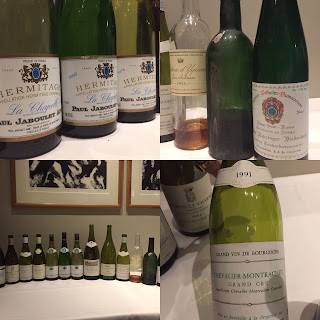 Another splendid few hours spent with great bottles and great people...long may it continue! It is exactly what wine shouldbe about. Here's to the next 50 Irish!