Back in May I made the annual trip to see Roberto Conterno and taste the new releases at Cantina Giacomo Conterno along with a few other wines (I love my job) you can read about that trip HERE. 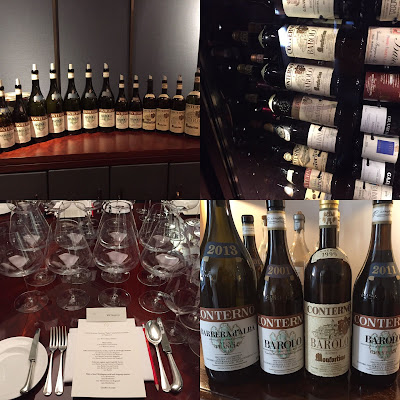 One of the things we discussed with Roberto and his, ever helpful, assistant Stephanie was getting them over to London, this we finalised while we were out there, setting dates for July. They had a very busy time while they were here and I have briefly put notes at the bottom of this post about the wines we showed at a press lunch and a private customer dinner.

One of the main things I wanted to do, with not a hint of self interest you understand (much!), was to get some customers together for a small (we were 12 people) Paulee at 67 Pall Mall. The team there, headed by Gareth, did a great job with endless Zalto Burgundy glasses and lots of pouring. 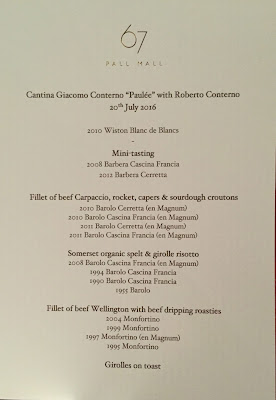 The team in the kitchen did exactly as asked and came up with a simple and non-clashing menu as below. In the nicest possible way I don't think we even noticed the food much!

People were asked to bring along a magnum or two bottles of a wine of Roberto's. I did a little bit of "steering" on the selections and we came up with a cracking combo. 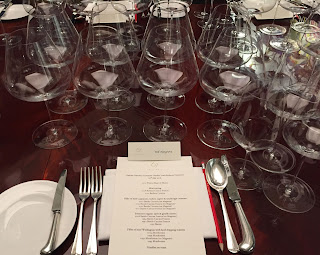 As the guests assembled we started with some Wiston Blanc de Blancs 2010 which is drinking very well right now, a nice combination of zip and a little toastiness showing, the sort of thing I will regret not tucking a few bottles aside of to see what it is like in 5 years or so.

Flight 1 - "Nobody puts Barbera in the corner"
Ok so that's a naff title for a flight but as Roberto never tires of saying "you are not opening a bottle of Barbera or Barolo of even Monfortino...you are opening a bottle of CONTERNO". The Barberas are given every bit of love and attention that the Barolos are and I would say (well I would wouldn't I) that the Conterno Barberas are the most consistently high quality you will find anywhere. I wanted to use this as a chance to show not only the two sites but two different stages of evolution:

Barbera Cascina Francia 2008 - this is a wine I know very well, moreish and becoming more savoury, good mellow grip and dark but not deep fruit. There is a lot of balance here, pretty seamless. Quite serious as Francia always is.

Barbera Cerretta 2012 - this is, like 2008 above, from a cooler, more classically Nebbiolo vintage. The vibrancy of the violets and dark cherry fruit is superb. If I was to drink any Conterno without food as an "aperitif" it would be Cerretta Barbera. Cool stoney minerality seems to get in there too.

Flight 2 - two by two...
So this is a cracking way to get to know two sites. I was keen to show these as they are two different vintages and then the two sites. The site differences showed very clearly. The vintages did too but a little less so. I think this is often the case with great producers.

Barolo Cerretta 2010 Magnum - this is the first Barolo from the site, 2008 and 2009 both being released as Langhe Nebbiolo (the 2008 is stunning right now!). This has a super-charged feel, rich and fruited and with a big structure, there is density and concentration here, lusciousness even sucrosity. This will be fascinating to follow.

Barolo Cascina Francia 2010 Magnum - my note for this features the word "serious" twice. There is a density but this is a linear wine, with drive and poise. I like this a great deal, it is just as I would want it to be, introvert, saline, tight and proper.

Barolo Cerretta 2011 Magnum - this really typifies Cerretta for me, it is friendly and approachable, begs to be drunk. Sweetness and succulence. There is a very Nebbiolo character but also a warm vintage intensity. If you own this it would be a great shame not to try it in youth.

Barolo Cascina Francia 2011 Magnum - my note just starts "Superb wine". Delicious fruit, good grip and drive that makes this less overt than the Cerretta. Reassuringly savoury and grippy but with fruit that roles over the tannin, great balance to the nose, red, black, soil and salinity. You can really sense the input of what would have been the Monfortino barrel.

It was every bit as good a flight as I hoped, as expected the 2011s are showing more now but the 2010s would appear to have it all.
Flight 3 - One site, four vintages...
If I was asked to name my favourite vineyard, from a pure drinking perspective it may very well be Cascina Francia. Now planted to 9hectares of Nebbiolo (to give you a perspective Clos de Tart is a little over 7 hectares and La Tache is around 5hectares) and 5hectares of Barbera.

Barolo Cascina Francia 2008 Magnum - I am a massive fan of 2008. I really feel that those who may have bought Barolo in 2004 and 2010 (the most lauded vintages) but not 2006 and 2008 have made a mistake. 2008 is a vintage of sweetness and elegant feminity but with no lack of classicism, 2006 is the older brother to 2008, grip and texture, a wine of sternness and complexity. Roberto was very interesting on the 2008 as a growing season mainly because there was a seven-day spell towards the end of September when the temperature fell to zero...this was about a month ahead of the Nebbiolo harvest. Somehow this seems to have left wines with less obvious tannin but no lack of complexity. This wine is a lovely example of Cascina Francia, fruited but not overly so, red bramble like hints with brine and leather grip in there.

Barolo Cascina Francia 1994 - this was "gone", badly stored I am guessing, like bovril and PX sherry then tobacco leaf. It is a wine I have had before, a few years ago, it is ok but not much more. In Roberto's own words "from 1995 it is pretty difficult to find bad vintages".

Barolo Cascina Francia 1990 - A wine I know pretty well and last had with Roberto when I visited back in May. It is also a wine I have had a few other times over the last 5 years. Saline, soy, degraded darker fruit and some bacon fat are real signatures of this wine. We did while tasting this superb wine get onto talking about 1989 vs 1990 and I remarked that I'd never had the 1989. There was also no Monfortino in 1989 which would seem odd for a vintage that many label as a comfortable 5stars. The reason is that only 4000 bottles of Barolo was made from the Cascina Francia vineyard due to a hailstorm. It remains I wine I crave to try.

Monfortino 1955 - now this is an experience and one I have had a couple of times before. Notably here during a splendid lunch. This was good showing. From 20 years (ok 19) before the Cascina Francia site was bought. Frazzles, bricky, briney nose with richness. There were a couple of funny conversations over this wine but the over-riding memory was that Roberto simply commented how totally ludicrous his predecessors would have found the idea of people in London enjoying this wine nearly 61 years after it was made! 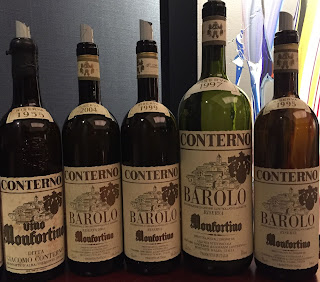 Flight 4 - Mighty Monfortino...for now and for later...
Monfortino is an iconic wine in the correct sense of the word i.e. because it has proved itself to be a beacon for Barolo and not because the estate or someone in marketing department calls it such a thing. Iconic status can be difficult as it comes with expectation. I genuinely believe that the Monfortinos of the last 15 years (01, 02, 04, 05, 06, 08, 10 & 13*) are amongst the greatest. * The 2013 will be just Monfortino (i.e. no Barolo Cascina Francia), a move not seen since 2002. Simply put, the quality is that good.

Monfortino 2004 - one of only about 5 or 6 wines I have given a perfect or near perfect 20 out of 20 to. That was when I tasted it at the estate back in May 2011. It is a wine I have had a few times since and it is profoundly good. Such drive and persistence, grace and at the same time fathomless structure. It has red fruit as well, no deep dark monster just a great wine. I wouldn't change a thing about it.

Monfortino 1999 - a slightly volatile example compared to the ones that the note below refers to. The was good, rich and full with a lot of salinity.

Monfortino 1997 Magnum - This is a cracking example of a mature Monfortino. It has soy and a little ginger as well as nicely degraded fruits. Of the Monfortinos from the last 30 years this is the one to drink right now. I think it will age well but why would you?

Monfortino 1995 - This is a leaner vintage for me, not quite the round degraded elements that you can find in the 1997. A little stricter. I have a feeling it will make a good older wine, I have nothing but gut feel to base that on.

It was a wonderful evening - to get the chance to sit and discuss this many wines with Roberto and hear the passion was incredible. I'll leave you with one comment from Roberto, said in the most heartfelt way imaginable "We do not make wines for other people, it is only in making wines for us that satisfy us, that we can be satisfied, that is what drives us".

All that really remains is, as ever, to thank Roberto (and Stephanie) for the time, energy and wonderful wines...I am looking forward to my next trip to the Langhe already!

Also in the same visit we hosted both a press lunch at the office and a dinner at Sartoria in Mayfair. On both occasions we showed the same four wines, my notes below: 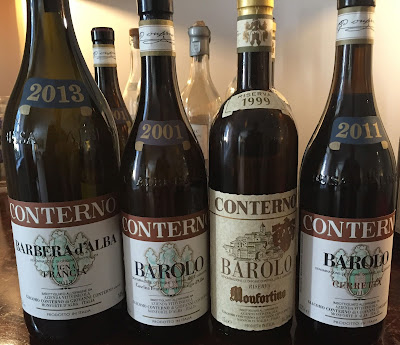 Barbera Cerretta 2013, En Magnum - "Intensity" and "pleasure" are the watch words here. This is a great vintage for Barbera, expressive and rich but with the necessary acidity and focus. More extrovert than the 2012 mentioned above. To my taste this will be in the zone in 2-3 years. Very true to its site.

Barolo Cascina Francia 2001 - Saline, salty, a zesty texture with bacon fat and soy, mellow fruits, some ginger appearing. This is just shifting from 3rd gear into 4th. Classical - 2001 being a serious vintage of intensity.

Monfortino 1999 - This is a very typical Monfortino for me, a vintage you "Chew", rich but vast, full and focused at the same time. Hard to write a note for actually. I have always liked this wine.

Barolo Cerretta 2011 - More clay here in this site and it shows there is a lusher texture. Notes from all three times (including the above) are very consistent. Vibrant energy.
Posted by Will Hargrove at 04:38