Last Wednesday saw the London Press tasting of the 2014 d'Angerville wines. A repeat, in format, of the 2013's at the same time last year. The setting was Home House in the West End. The order of the day is to taste the 2014's in the same way one would typically do so in Burgundy, i.e. to finish with the white. The aim for me here is to give my own, admittedly biased, views. But a few words from Guillaume d'Angerville to start seems fair.


"We had a superb potential crop ahead of the June 30th hailstorm. The hail reduced the volume of the crop, but quality was preserved and is intact. The wines are classy and powerful, clean and complex at the same time" October 2015.

That Volnay should have seen hail again in 2014 really was unbelievable. The last full harvest having been 2009. This is true of all of Burgundy but the exaggeration of difference was by far the most savage around Volnay over this time. So to the tasting:

Pommard 1er Cru Combes Dessus 2014 - Darker fruit character and some lovely, proper grip, depth two but not crudely so, sweetness joins on the mid palate and leads to a good long finish. Impressive.

Volnay 1er Cru 2014 - Bright red fruits and considerable focus. Lovely drive through this and some grip but less than the Pommard before it. Very correct and pure.

Volnay 1er Cru Clos des Angles 2014 - Ripe nose, markedly so, more sweetness and life. Then a very grown-up grip and structure, makes you pay attention. Red fruit yes, but seriously so. Very impressive, the best Angles I have had and a surprise in a very positive sense. 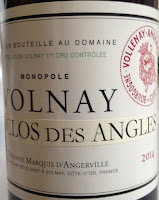 Volnay 1er Cru Fremiet 2014 - A little deeper of fruit, some darker fruit making itself known. Freshness balanced by a little more flesh, you could even say a little rounder or lusher. More density and tannin also.

Volnay 1er Cru Caillerets 2014 - A little more muted on the nose, which could be seriousness. Then the palate is actually more giving before again being a little tight. You get a sense of more power and strength but no real feel for whether this is the character or a phase. A little less flesh, intriguing.

Volnay 1er Cru Champans 2014 - Darker fruit, to try to quantify it I'd say 30% red and 70% ripe black fruits. There is a lovely streak of saline to this as well. All in all it suggests a little more savoury character and seriousness than some of the crus at this stage. Sweeter creamy fruits on the palate slightly contradict this. Good overall structure and a very impressive Champans.

Volnay 1er Cru Clos des Ducs 2014 - Crimson fruit on the nose more akin to the Taillepieds than any other site. A little graphite and almost stem-like character too. The acidity, grip and fruit in good balance.The savoury edge of Champans also shows but with a mineral (stones) follow through rather than heading towards savoury decay. Serious but appreciably good even now.

Meursault 1er Cru Meursault-Santenots 2014 - Salted white fruits, lean (by which I mean focussed) with a briny energy. The palate shows more ripeness and depth. Best of this that I have had. The impression here (backed up by the 2012 at Lunch, see below) is that this white is being taken more and more seriously.

Over-riding impression - The 2014's here are serious in quality but appreciably enjoyable even now. It strikes me that 2014 plays to the strengths of Volnay, red fruited drive and lift with grip and stuffing tucked away to be deployed later. The sites I think showed as clearly as ever and certainly more so than tends to be the case is a vintage of more consistent heat. I can't see that these will close down either for too long or in too serious a way. Large, wide, drinking windows. 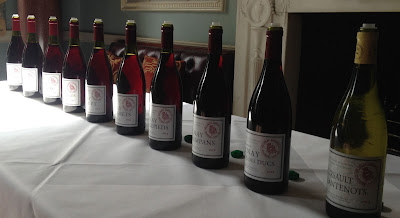 Having tasted it was time for a few bubbles before lunch, that honour fell to Wiston Blanc de Blanc 2010. Made down near worthing this is a property to watch and 2010 manages to combine clear ripeness with a good amount of poise. Lunch was designed to play a good second fiddle to the wines and so it did. I could have eaten quite a lot of the middle course which was delicious with the five reds.

The wines, as with the tasting, were all served cool and poured nice and early (without any decanting) so they could develop in the glass. 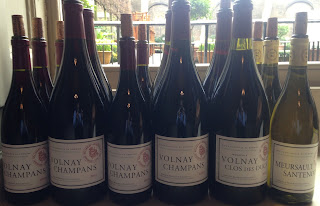 The first flight was a trio of Champans all of very different vintage character:

The d'Angerville parcel in Champans is the largest holding with 4hectares of the 11 and right in the middle, Guillaume observed that the rows in this site are very long, as long as 300metres at times. It is the one site he feels you would show someone the wines from if you were to try to explain the typical Volnay.

The 2009; the last "volume" vintage, with yields of 36/38hl/ha, did show the "Sexiness and class" that Guillaume mentioned. The coolness of serving helped emphasise the saline side but there was a nice subtleness to the darker fruit as well. The class was so evident on the nose with the sweetness and more extrovert side on the palate, lovely. 2011 was a vintage that was overshadowed by the 2010 that preceded it. A "lovely pinot vintage" with a very early picking date. There is a drive to this and a clear red fruit side with the focus being elegance and vigour over lushness. I liked it and found it moreish which is always a good sign. 2012 was the most heartbreaking of vintages with a quarter of the normal crop and Guillaume observed that the wine had been concentrated by nature. This was immediately evident by the colour, much darker. Guillaume also observed there is a compressed nature to the wines, like the 1999's he said. I loved this finding an odd note of ripe graphite, for me there was a nod to the northern Rhone in its masculinity but then freshness drove through on the palate and I immediately wondered what I meant. The word "serious" appears three times in my note. A special wine for being true but Atypical at the same time.

The next flight saw a different comparison, that of site rather than vintage. Both served from magnum it was Volnay 1er Cru Champans 2007 alongside Volnay 1er Cru Clos des Ducs 2007. I have been enjoying a lot of red Burgundy 2007's the last few years but if truth be told the first one I really loved was Champans 2007. This wine has a lovely mid-development now with good fruit but a lovely cheesecloth side, like the rind on a brie. The palate is far more fruited with good sweetness and that all important "drink me" moreishness. Clos des Ducs is more forward here than almost any other vintage I can think of and I am lucky enough to have had a few. It is going to age well but when it tastes this delicious now you can to a degree start to wonder what you might be waiting for. Great balance.

I slightly gave away, above, the fact that the Meursault 1er Cru Meursault-Santenots 2012 was rather good! There is a nice whiff of reduction, gunflint, to this that just, for me, adds seriousness and counter-balances what is a lovely ripe yet restrained palate. I would struggle not to drink this if I had it at home but can well imagine in 2-3 years this will be even better.

And with that the lunch came to a nice close. Cracking wines and much fun. One of Burgundies big names showing exactly why that is so.
Posted by Will Hargrove at 11:19