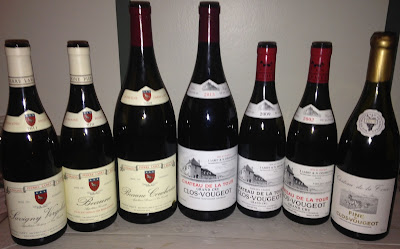 It was great pleasure back on the 3rd of February to host a Dinner with Francois Labet at No 1 Lombard Street. A venue I've used several times for events we have done with people like Peter Sisseck, Domaine Trapet, Tenuta di Biserno, Phelan Segur and many, many others. It is a good venue in a good central location.
Francois is best known for running, in every way, Chateau de la Tour, the largest owner of Clos Vougeot which in turn is the largest Grand Cru in the Cotes de Nuits. This dinner was to showcase both this estate and Domaine Pierre Labet, DPL, with Pierre being Francois' father. The wines under both labels are made at Chateau de la Tour with the same fastidious attention to detail. The DPL vineyards, which is 16ha in total, are farmed organically where Chateau de la Tour, 6ha, has been run Bio-dynamically since 1992.

The aperitif before dinner was Savigny 1er cru Vergelesses 2011, a flattering and expressive wine from a vintage I love drinking now. The site is opposite Corton-Charlemagne and is one of those that people are looking at more and more seriously as they are with Pernand Verglesses, Auxey-Duresses and St.Aubin.

We then made our way though for dinner of:

We kicked off the dinner wines with Beaune Blanc Clos du Dessus des Marconnets 2010. Francois described 2010 as the vintage of reference, for both reds and whites. This was tighter and more serious than the Savigny, with a vibrant citrus note and is clearly a wine that there is no rush with.

Beaune 1er cru Coucherias 2009 in magnum was up next and had a lovely decadent richness, it opened up more and more in glass and is more rich than heavy.Francois is a fan of whole bunches and this is 100%. I think this works really well, especially in the riper vintages. 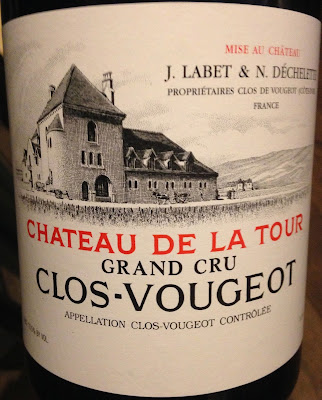 As we moved to the main course we were solidly into the Clos Vougeot zone. Francois knows the Clos, which was created in 1098, inside out. These wines are always ones that, for me, need time to shine their brightest but what I think has become really a great feature of almost all great red Burgundies is how brilliant they are young which is why I was delighted Francois chose to show the Clos Vougeot Château de la Tour Classique 2013 from magnum. It was juicy and generous with good balance and purity. There is a certain easy cool, stoneyness with a crunchy fruit. I picked up a marked note of digestive biscuits at the end. This is a good interpretation of a vintage that some people might have slightly underestimated. The Clos Vougeot Château de la Tour Vieilles Vignes 2009 that we had next is made from the parts of the holdings that were planted in 1910 so you could certainly add a "tres" in front of the Vieilles Vignes. The nose is quite muted and closed, there is a warmer vintage feel here in the decadence of the serious, darker fruit. There is a density to the sappy fruit character. Whilst a tad closed this is classy. Clos Vougeot Château de la Tour Vieilles Vignes 2002 was stunning to put it simply. Combining elements of the 2009 and 2013 but adding the beginning of the secondary aromas. This is really starting to go through the gears. The sort of wine you wish you could just wallow in a bottle of with simple food and no rush. A gorgeously sweetly degraded fruit and a dash of saline…delightful. For those that like factoids - 1986 was the first time the Vieilles Vignes was made and 1987 was the first year of 100% whole bunch fermentation.

Fine de Bourgogne, Clos de Vougeot 1979 - I can totally understand those who see Fine or Marc de Bourgogne and think "oh no, a by-product of vinification and a bit of easy money" BUT this is a little different as it is an exception not a rule. I had no idea there was such a story but then I should have realised as I had never heard Francois mention he does a Fine because essential he doesn't. The 1979 is the only time. The reason being that there was a small second harvest in 1979 in November, I think due to the fact there had been hail damage earlier in the season. Anyway these grapes harvested in November would only have been any good for litres and litres of very acidic rose so they made an Fine instead. Just three barrels and only bottled 3 years ago. It was really rather splendid, I didn't write a note - I was not in note taking mode by this stage.

A really special dinner with terrific wines and lovely insights from one of the most modest, but not to underestimated in any way, men of Burgundy. I will leave you with a link to two very generous bottles Francois opened back in 2009 - 1990 and 1959. Oh to taste many of the wines from tonight in 50 years time!!
Posted by Will Hargrove at 08:02