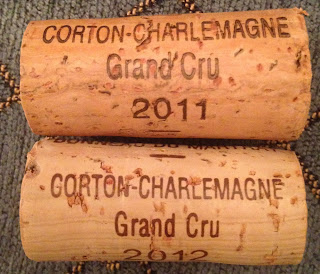 A few weeks back before everything got ever more manic with Christmas and the pre-Burgundy season (January) workload we were delighted to have Jean-Charles le Bault de La Moriniere of Bonneau du Martray in town. We spent two hours listening to him and firing questions at him while we tasted two reds and three whites. It was a special afternoon. As usual I will state my fairly considerable bias now, this is the 15th vintage I have worked with. Having said that there is arguably no other 100% Grand Cru estate that is under-recognised like Bonneau du Martray. The older vintages of this great estate are stunning and that includes years with no right to be so like the 1987 and 1994 that I have had several times. The 1992 is one of "the" white Burgundy drinking experiences. There have been intermittent "premox" problems but these Jean-Charles feels certain are due 100% to cork supplier (i.e. there are "good" and "bad" batches as the Domaine had separate suppliers - a common practice) and limited to 1995-2005 in my view. There is nothing before and nothing since where I have seen any problems. I say this from a stand point where my drinking experience is greater with this estate that almost any other white Burgundy estate.

I do not intend this to be a long post, I have written on these wines many times in the past and whilst I am honest enough to say I do not always understand the red Corton or give it the time (in maturity terms) in may well need, I love the Corton-Charlemagne for it's preciseness and moreishness - I always want another glass/bottle/magnum and ultimately that is the measure of a wine being great.

As in Burgundy we went red then white:


Corton Grand Cru  2009 – Lovely tight freshness, it is too early but there is a lot to love about the minerality here. A wine to look at again in 4-5 years and well beyond.

Corton Grand Cru 2014 – (cask sample which the Domaine do not like to do) I simply summed this up as “Vibrant”, there is so much energy and purity…will be exciting to follow. 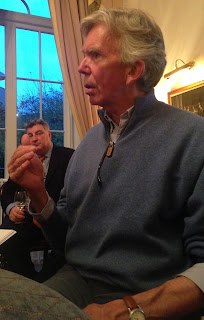 Corton-Charlemagne Grand Cru 2011 – I love this wine. It showed so well. There is just a wonderful balance, opulent but so true to the Domaine. Some lemon short bread and easy persistence. Hedonistic even.

Corton-Charlemagne Grand Cru 2012 – Wow! This has so much potential. Coiled like the tightest of springs with a whiff of reduction and then so much power to the palate – this demands patience! It is a real shame that this crop was so small but may be that is where the magic comes from.

Corton-Charlemagne Grand Cru 2014 – (cask sample again) Focussed and fine with lots of minerality and so much drive, a little lime and saline too. Superb.