Champagne Salon & Delamotte with Didier Depond for the IMW 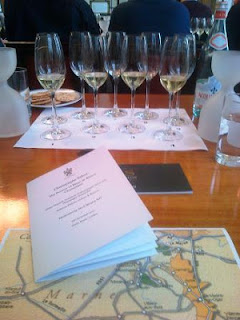 I went to a tasting organised by The Institute of Masters of Wine at Trinity House entitled “Salon – the pioneer of Blanc de Blancs Champagne”. The tasting focussed on the sister houses of Champagne Delamotte and Champagne Salon. Both houses are now owned by the Nonancourt family and are in turn under the umbrella of Laurent Perrier. Didier Depond, President of both Salon & Delamotte, presented five vintages of Salon – 1999, 1997, 1988, 1983 and 1976– together with four other wines from Delamotte - Blanc de Blancs NV, 2002, 1996 and 1985 "Collection". Also at the top table was Mark Bingley MW as moderator and Rebecca Palmer representing importer Corney & Barrow.

Delamotte
As a house Delamotte was established in 1760 and is therefore 252 years old. The focus is very much on the Chardonnay grape and and on only Grand Cru vineyards. The only wine that can not be called Grand Cru is the Brut NV as it contains Pinot Meunier, for which there are no Grand Cru sites. The reserve wines are kept in stainless steel. Delamotte owns 30 hectares in 3 villages and buys 30-35 other hectares it needs for the small total prodcustion of 800,000 bottles. The wines all go through 100% malolactic fermentation. So the tasting...

1. Delamotte Blanc de Blancs NV (disgorged in Jan 2012, base wine is 2005). In many ways the "Star" of the company, Asia & Japan specifically go crazy for this wine, it is a firm personal favourite. It spends 48 months on the lees and has a dosage of 6.5g/litre. The wine comes from sites in Le Mesnil, Oger and Avize. I found it lovely, pretty, balanced with white fruits and flowers. Refined is a good word here, the stone fruit and citrus with a refreshing finish make it a perfect aperitif as well as good with Asia food.

2. Delamotte Blanc de Blancs 2002 (disgorged in Oct 2011). A slightly toastier nose than for the NV. Light nutty elements, almond, the fruit more dried than fresh. Tightly in check with very slight notes of apricot and dried banana. Great length. This was better and better on returning to the glass...a class act needing time to be at it's peak. From 2015. Didier commented that 2002 in yielded and style is similar to that of 1996.

3. Delamotte Blanc de Blancs 1996 (Magnum, disgorged June 2006). I think I am right in saying that this particular vintage was mostly sold to Japan. The initial impression is of a more unctuous, nuttier, richer and deeper wine all round. A wider more rounded feel about it, some honey and greek yoghurt, apricot again and fruit that is more tropical. Almost like two wines in one, more restrained and tighter on the nose, more exotic on the palate. Drinking well now onwards.

4. Delamotte Blanc de Blancs 1985 "Collection" (disgorged Dec 2000). Collection is the very small library stocks that are kept back. 1985 was a year of extremes, Didier remembers it as having a savage winter, it was his "army year" and then a very hot summer (up to 40 degrees) before a more normal September. The wine shows this hot spike, not in a bad way but in the high toned - toffee apple richness. Admittedly some of this comes from the bottle age. The nose had creme patisserie and a little caramel as well as the toffee apples. Very vinous. Interesting and a food Champagne.

Salon
Eugène Aimé Salon started making his famous Blanc de Blancs a century ago and to date only 37 vintages have been released. It was initially made without any commercial intent, purely for him and his friends.  He was the first producer to focus on this style of champagne, but more importantly from one single village. His unique wines – one cru, a single grape variety and only in the greatest vintages – have become a champagne legend, especially known for their remarkable longevity. A “Mono” wine made against the fashion for blending. No malolactic-fermentation (with one exception see notes below). The "Salon decision", whether to make a Salon or not, is made in the Jan/Feb following the vintage. There have been some notable exceptions when Salon has not been made the two most recent are 1998 (in Le Mesnil the Chardonnay was not perfect) and in 2000 for the same reason. Almost all other houses released 1998 and 2000. Salon is now made from 19 of the original 20 parcels. 17 of these are in the Village of Mesnil. Salon owns 6 hectares and has long term agreements for the others it needs. The release of the wines is famously late just as the wines are starting to show themselves the 1999 was only released 18 months ago and the 2002 will not be until at least 2014. The wines for the tasting were poured one at a time and the notes made over the course of an hour...

5. Salon 1999 (disgorged in June 2012). Taut tight and muted, an infant. White stone fruits. Classical. A Grand Cru Chablis of a Champagne if that makes sense. A tiny toast come through on the very end of what is a multi-dimensional texture. 2015 onwards. A potential legend.

6. Salon 1997 (disgorged in Sept 2010). Stunning and really complete. Real character and already in a nice place. Just moving away from being too young, a little bit of shortbread is showing and a little biscuit. The fruit is bright and definitely on the citrus side. Drink now onwards with no rush, very impressive. (I actually had it again for my birthday the next day and it was just as impressive.)

7. Salon 1988 (disgorged in Oct 2012). This is a unique Salon in that the malolactic fermentation started but never finished. The nose initially was of brine and minerals. Then on the palate elements of spice arrived. The fruit was there but hard to define. The wine as a whole (and it is as much a wine as a Champagne) reminds me of the sea and unsalted nuts. A "Salon for food" as Didier put it. Drink now onwards.

9. Salon 1976 (Magnum disgorged in Oct 2012). Didier commented that this was, as many will know, a very dry and hot spring and summer with no rain at all in May, June, July or August. The briney character was there on entry with the Mocha and cocoa also present but beyond those there was cassis and blackberry leaves and pomegranate. The late disgorgement made for incredible freshness and life. Drink now onwards.

The fact that so many of these wines had been disgorged for the tasting was incredible and incredibly kind of Didier. I have been lucky to drink let alone taste a lot of Delamotte and Salon over the years and whilst I am very biased I do not see how any one could avoid judging them as being at the very top of the Champagne tree.
Posted by Will Hargrove at 08:08