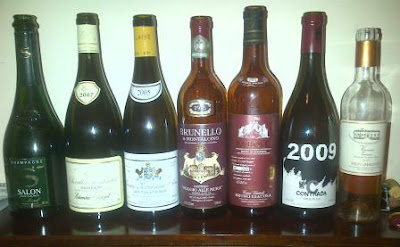 The venue for this dinner was "Duvault Blochet Towers" and the guests were Eric "Mr Barolo" Sabourin and his lovely wife Claire and Sam "Zucca" Harris as well as Mrs Duvault Blochet. We started with Salon 1997 which is showing so well at the moment, deliciously Salon but quite forward, classy Blanc de Blancs with a little bit of bottle age, lovely. Then we were on to Sam's two white Burgundies which were both showing well but at the same time splendidly different. Having tasted and decanted them both I thought it was better to go first with the Chevalier Montrachet 2007 from Sauzet. This had a real 2007 hallmark about it, very focussed, youthful but approachable, refined, lemon and lime acid structure, very fine indeed, delicious and it flew down with Mrs DB's Bruscettas. Next up was Puligny-Montrachet 1er Cru Folatieres 2005 from Domaine Leflaive, this also had the stamp of it's vintage on it is that it was ripe and full almost overripe with a tendency to rich nearly exotic fruit and a rich texture. There was a classic Leflaive "struck match" aroma as well, a really good bottle and I would say ready to go now, definitely one to decant.

With the whites done we were now looking at reds to go with my mother-in-laws main course of beef stew and dumplings. Very kindly Eric had supplied two 1975's, Sam as well as my vintage. The first up, and these were both opened decanted and drunk, was Brunello di Montalcino 1975 Castello Poggio alle Mura. 1975 is viewed as a good vintage in Tuscany and this wine still had fruit, lots of acidity too, it was nice but at the end of its life, very enjoyable. The next bottle was something of a revelation, ok you always expect the best from Giacosa red labels, but 1975 is not a fabled vintage in piedmont. The Barolo Bussia Riserva Speciale 1975 was great, real depth and complexity, good fruit and in many ways at a peak, not over it. It got better and better and had real freshness, a wonderful and great surprise. I then thought why not have one more red blind, as well as the end of the whites, with some cheese. I grabbed Contrada Chiappemacine 2009 from Andrea Franchetti's Tenuta di Passopisciaro. A wine of 100% Nerello Mascalese but from a particular Cru. This was a harsh wine to serve blind and the shouts were young red burgundy or Loire Cabernet Franc and both totally justified, it will get better and better but the purity of red fruit is stunning.
Sam's awesome blueberry and almond tart was the end of the meal and went wonderfully with Vin Santo 2004 from Vignamaggio, a good Vin santo with lovely acidity and vibrant marmalade fruits. It had been a night of great wines, even better company and lots of banter...just as it should be.
Posted by Will Hargrove at 04:25