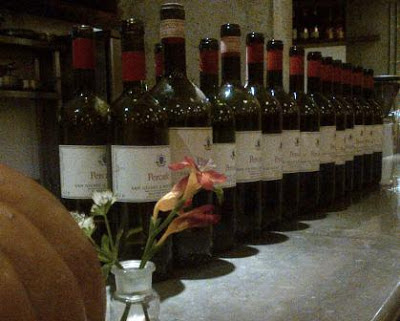 Another great and very interesting evening of Italian wine drinking/tasting last night. The venue was Zucca and Eric was at the helm of the tasting as ever. The evening was all about the top wine from San Giusto a Rentannano namely “Percarlo”. The wine was first made back in 1983 but so little was made that the 1985 was the first real vintage that was sold commercially. The wine was named as a tribute to a friend, “Carlo”, of the owners family. It is a tricky wine to pigeon hole in so far as it was outside the Chianti rules at the time it was made, because it is 100% Sangiovese without the then required 15% white grapes, but isn’t now. So in many ways it more truly a “Super” Tuscan than the imported grape variety “Super Tuscans”. No 2000 or 2002 of the wine were made. The grapes which go into the making of Percarlo are selected, bunch per bunch, from vineyards whose soil is composed of layers of sand and stones which lie 2 to 5 meters deep and rest on beds of clay.  The vineyards are situated at an average altitude of 270 meters above sea level. Fermentation and maceration take place in enamelled cement vats and last up to 35 days. The yeasts produced are natural. Aging is in French oak barriques for 20-22 months before being bottled unfiltered and held in bottle for another 18 months before being released. 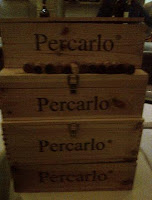 We started the evening with some Ayala Zero Dosage, a good palate cleaner if a little too "zero" for me, it set things up nicely. All the Percarlo's were from magnum with the exception of the 1988 and 1993 which were from bottle, there had been a mag of the 1988 but we drank that back in august on the golf, bbq, poker day. All wines had been decanted out of the bottle and back in just before the tasting. We tasted in flights of two or three wines. I have put a (my) definite score by the wines I deem mature or as near to it as matters and a range for those that I expect to show marked change/development.

Flight 1 – The mature wines
1988 Fully mature and showing the class of the vintage, a few people found it to be a little weary but I felt it was very Sangiovese and drinking well, as expected it is a little softer than what I remember of the magnum being. A fine start. As with the 1993 very much a wine to drink rather than taste. (18)
1990 More density of fruit and more “showy” a little bit of the lushness you expect from most European '90’s. Flattering on the palate, it doesn’t evolve much on the finish which is all that stops it scoring higher, very good. (18)
1993 A bit of a crowd-divider, I loved the elegance and almost Nebbiolo like “bricky” development. Some felt it was past it’s best. Definitely one to drink up as a little bit of dryness and shortness is coming into play, very Italian! (17)
Flight 2 – The "inbetweeners"
1994 This was, like 1993, not an easy vintage. I felt it was decent, a little simple, not complex, enjoyable with cool freshness but no more than that. (16)
1995 This was another wine that got debated in some depth. The main question was a bit of a “Bordeaux-1986-question” namely will the fruit live on long enough once the structure drops down a little or will balance never be achieved? I was slightly undecided but feel the wine does lack for a little charm, the depth and texture are not in question, the fruit is blacker than the other mature vintages. I felt it was impressive but it would be low down my list of wines to drink compared to others here.  (17?)
1996 (corked)
Flight 3 – The teenagers
1997 A quite toasty nose with everything going on, richness, not much subtlety but there is balance so that will come, very good and classy for a 1997, some of which are a little OTT. (17.5-18)
1998 In some ways the wine of the night for me, a touch of the elegance of the '88 & '93 with the fruit and depth of the 1997. It was very Italian with good structure but the support was more on the side of refreshing acidity than tannin, a good thing, some leather and spice too. This was a strong flight but for drinking there and then the 1998 had it for me. Proper wine, would love to own it. (18.5)
1999 Not to the degree of the 1995 but this wine lacked a little charm. I felt it will even out though. Masculine in style and robust in personality a little foursquare. This all sounds too negative as it was good, nearly very good. Judgement slightly reserved. (17-17.5)
Flight 4 – The youngsters 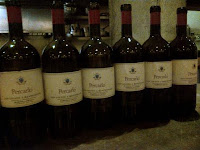 2001 I slightly seemed to differ from the crowd on the 2001, I found a lightness of touch especially on the nose with some red fruits, the tannin was definitely there on the palate and may be a touch too obvious but otherwise I found it had good elegance. Enjoyed it. (17-18)
2004 This was awkward and might, whilst not faulty, have just not been the best magnum. There was depth there but just no balance, a little closed may be but more strange than anything. Not unpleasant just awkward. (15-17?)
2006 Dense, rich, a little darker, more volume to this wine than many. Young for sure, good potential. (17-17.5)
Flight 5 – The babies

Post tasting it was pasta and pheasant ragu courtesy of Sam, what a great dish it was too…could have eaten it for ages. A double magnum of Fontalloro 1997 was a willing accomplice. A great tasting…the 8’s just had it for me but a lot of good wines and very few disappointments. 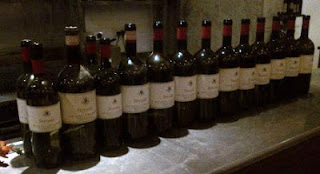