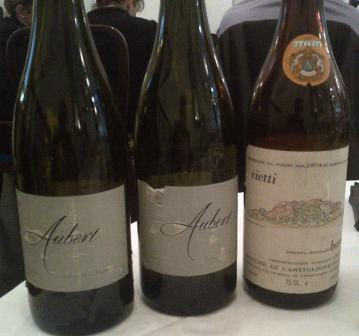 Last Friday lunchtime I had a good chance to catch up with a customer/friend over a few bottles he kindly wanted to share. I was in for a treat. The venue was Otto's not far from Chancery Lane or Holborn and purveyor of good, mostly French inspired food, always made well and a very positive attitude to wine, good glasses, know how to serve it etc.
It was to be a meal of two whites and one red. The Whites were both Chardonnays from Mark Aubert in Sonoma Coast. Both whites were from 2010, The Aubert "Ritchie" Vineyard and the Aubert "Lauren Estate" Vineyard. The fact we had Ritchie on the right and Lauren on the left was a sensible decision as the labels are strikingly sameish. Having consulted the notes on the wines it appears both wines are as the names suggest from different locations. Both see largely the same winemaking - harvested at night for freshness, from different blocks (5 for Ritchie & 6 for Lauren), Barrel fermented and then given 11 months in new French oak before 3 months in tank with no fining or filtration before bottling. The later fact was clear as the wines were slighty hazy, something I quite like. So what did they taste like? There were encouraging similarities and differences. Both had quite high alcohol (15.2% I think) but neither showed it. They had a lime an lemon sherbet type fruit but were wines of texture. The differences were in shape as much as anything. The Ritchie was a rounder more lush example, the fruit being almost over-ripe but not quite. The Lauren is a more Burgundian Meursaultesque expression, more savoury, less opulent, all in all a shade classier to my palate. Both good and many of these comments only apply as we tasted both together. A really interesting pair that continued to evolve, certainly of high quality.
The red was back on more familiar ground for me - Barolo Roche Riserva Especial 1974. The bottle was in good condition with a good level. On decanting the wine had a classic old Barolo nose of frazzles and herbs. It then over 20 minutes in the decanter relaxed and became a medium bodied, may be even on the light side of that, elegant and sweet fruited fully mature Barolo. I have had a few older Vietti's now and they seem to have stood the test of time very well, possibly without ever becoming show stoppers.
A rather splendid lunch!
Posted by Will Hargrove at 08:34